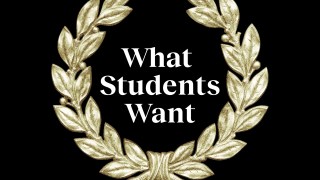 Former Harvard professor and best-selling author Todd Rose explains the problem with prestigious colleges and how the future of higher ed could be bright.
▸
4 min
—
with
Todd Rose

Collective Illusions is brought to you by Stand Together: a community of changemakers tackling our biggest challenges.

TODD ROSE: What people don't want is essentially the education system we have right now. A standardized system with standardized assessments, leading to standardized outcomes that treats every kid exactly the same. The problem is, these people are absolutely convinced that most people still want the existing standardized system, which is a collective illusion.

A collective illusion is a situation where most people in a group go along with an idea that they don't agree with, simply because they incorrectly think that most other people in the group agree with it. If I believe most everybody else in the country is more or less happy with the one size fits all system, and college is the only indicator of success, nothing's going to change.

What we're witnessing right now across the country is a pretty dramatic shift in the way people think about their relationship between people and our institutions. And nowhere is that more prevalent than in education. Out of the 66 possibilities that an institution of higher education could deliver, what we wanted to understand is, what do you prioritize?

What you're given is a task that says school A, school B. Six of those 66 attributes are randomly grabbed for school A, another six are grabbed for school B, which one of these do you choose? Do it again with six others, and that allows us to build a profile for you of your trade-off priorities for higher education. What people think people want out of higher education is the prestigious school with a great sports team and an active social life. What people actually want out of higher ed is to get a good job that is meaningful to them, and to do that with as little debt as possible.

There are incredible institutions of higher education who are giving us a vision of what the future of higher education will be. They are doing things that are modularized, individualized, customized using credentials instead of diplomas, to create better signals for employers. People are really interested not just in having an undifferentiated diploma, but also a hybrid, on the job training, apprenticeships. It's not simply book smarts that gets you the job that you want. Success is not just going to college, it is actually, are we equipping you to live the life that you want to live?

Parents know their kids better than bureaucrats know their kids. Communities know their values better than the federal government knows a community's values. Where there's a lot of common ground is in this commitment to a far more individualized educational experience. Education is and always will be the great equalizer, the best vehicle for enabling people to actually live the kind of lives they want to live. That might be college for some people, it might be trades for others.

What social entrepreneurs need to do is build the solutions and dismantle the illusions, we get it right, and we acknowledge the collective illusion. Recognize our common desires for the purpose of education moving forward. There's an opportunity to drive pretty substantial change, and we can actually have the education system that we want and deserve.

Is there an afterlife? Here’s what he saw while he was ‘dead’