Why was Martin Luther King Jr. a socialist?

We often bicker and argue over what our national heroes believed in. Why did Dr. King believe in moving towards socialism? 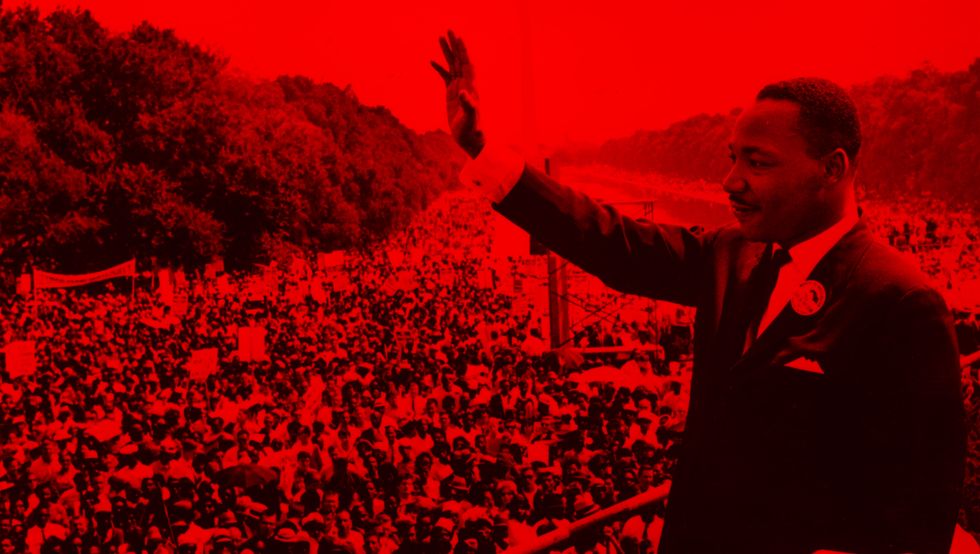 King shortly after the "I Have a Dream" speech at the Lincoln Memorial. (Getty Images)

Martin Luther King Jr, assassinated 50 years ago this week, remains a titan in American history. As the first person to have a federal holiday honoring them without being a president, the first African American with a monument on the national mall, and the sole American venerated as a martyr of the 20th century at Westminster Abbey, King’s legacy endures.

His legacy is, however, often sanitized, manipulated, and even warped to support the narrative others want to tell. The matter of his political opinions is one area of particular contention, with often controversial attempts to capture his legacy and invoke his dream. We hope to explain one matter of his philosophy here, especially the parts that are often swept under the rug.

The Democratic Socialism of Dr. King

King was expressing his opposition to capitalism as early as 1952. In a letter to his wife sent that year, he noted that “I imagine you already know that I am much more socialistic in my economic theory than capitalistic.” This letter, written before his activism was notable, was merely the start of his radicalism.

In his speech to the Negro American Labor Council in 1965, King declared that “something is wrong with capitalism,” and suggested that “There must be a better distribution of wealth, and maybe America must move toward a democratic socialism.” His concern for the poor was unflinching and came to greater prominence in his activism towards the end of his life. In his final speech to SCLC, he said: “Why are there forty million poor people in America?” ... When you ask that question, you begin to question the capitalistic economy.” In an era when the word “socialism” was akin to “communism,” this was a rather gutsy thing to say, especially as the FBI was trying to discredit him by means of tying him to communism

It must be noted that he opposed communism on the grounds of its materialism, totalitarian tendencies, and de-emphasis on the individual. He was not shy about expressing these views either. His support for socialism was based on his love of equality and democracy, rather than on any ideological fanaticism. The failure of capitalism to improve the situation of African Americans was also a key factor and one he mentioned many times.

Was this socialism tied to his activism?

His sentiment towards the need for the United States to invest more fully in social programs was noted in the speech The Casualties of the War in Vietnam, where he lamented that “the promises of the Great Society have been shot down on the battlefield of Vietnam.” This speech is much more politically charged than many of his more popular ones and reflects both a political and moral stance that was not shared by all Americans.

He saw the expense of the Vietnam War as obscene, especially given the condition of poor Americans. This drove him towards the anti-war movement in the late 1960’s. His anti-war sentiments did not come without risks to the Civil Rights movement, as strong opposition to the war would alienate potential allies and further inflame allegations that King was a communist sympathizer.

His increasingly frequent speeches in favor of higher social spending and against the war in Vietnam lead to several persons, including the perennial Socialist Party candidate for president Norman Thomas, to encourage him to run for president in 1968, which King briefly considered.

Dr. King (lower left) during The March on Washington for Jobs and Freedom. The economic elements of the civil rights movement are often overlooked despite the prominence those issues took. Notice how many signs talk about jobs and pay. (Getty Images)

What other views did he hold?

He favored the basic income long before it was fashionable to do so, arguing in his book Where Do We Go from Here? Chaos or Community? that “The solution to poverty is to abolish it directly by a now widely discussed measure: the guaranteed income.” He referenced the concept in speeches and interviews frequently, though he was never able to act on it. Other than ignoring his left-wing economic views, which were seen as a threat by the FBI at the time, his other radical views are often marginalized for the sake of making him an American saint. While he is praised for his non-violent activism, we often forget that he called a riot “the language of the unheard” and spoke on behalf of the right of self-determination for all people, including the communists of North Vietnam.

Where are we now on his economic goals?

When King was assassinated on April 4th, 1968 he was in the middle of the Poor People’s Campaign which focused on economic inequality and demanded an “Economic Bill of Rights” from Congress. He was in Memphis the day of his death in support of striking workers.

Today, fifty years later, questions of economic inequality remain. We are a much more unequal society than we were when King was shot, though the popularity of the basic income has increased and discussions of an economic bill of rights have resurfaced.

It is a common occurrence in all countries to bend the political views and principles of long-dead heroes to try and drum up support for modern issues. Americans do it all the time with the founding fathers, and Dr. King is a member of the same pantheon of American leaders. King’s life stands out as an example of how moral force and be used despite a lack of pollical power, and his legacy is a great prize for anybody who manages to spin his life to favor their position.

His ideas on socialism were controversial then and are problematic for us today. We must remember that his economic notions are based on the same principles as his civil rights marches. His dedication is not to Marxism but to universal brotherhood, equality, democracy, and justice.

Even if we are not socialists, to consider Dr. King’s positions and rationales for them is a necessary project in an age where we consider the same problems he did. Dr. King knew that he wouldn’t see all of his dreams come true, but his insightful critiques of American capitalism will join us no matter which way we go from here.