Why the original meaning of the American Dream is unrecognizable today

What is the American Dream? The ever-changing definition of it might surprise you nearly as much as what it used to mean. 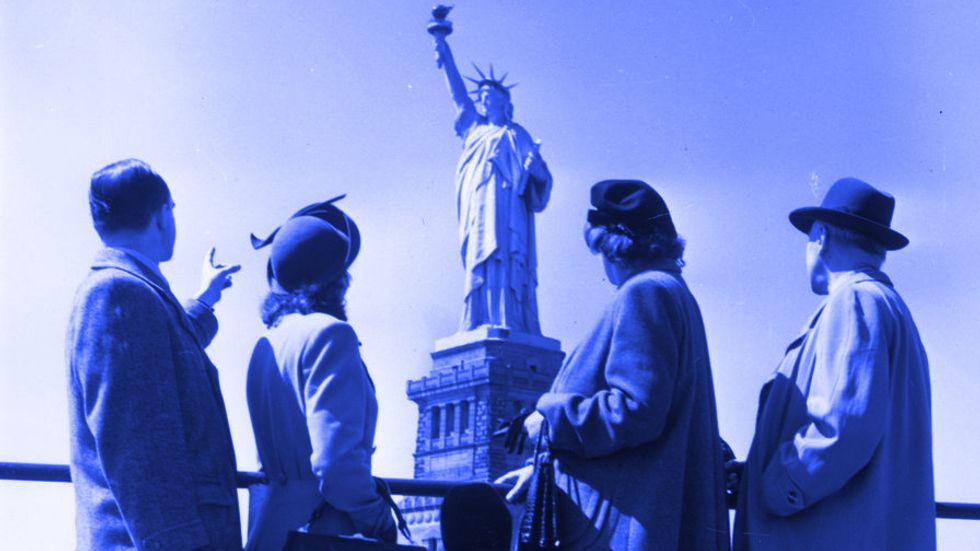 Hungarian immigrants admire the Statue of Liberty, a symbol of American promise and the dream of a better life. (Getty Images)

The concept of the American Dream has been well known for some time. Notions of a new world, different than the old one, were invoked by the founding fathers. The idea of a new world where anything was possible was used more than a century ago to encourage immigration. Politicians reference it constantly on the campaign trail. Indeed, the American Dream has a long intellectual history that permeates the national character.

But what is it exactly?

It may surprise you to learn that the phrase “American Dream” has only been around since 1931. Coined by James Truslow Adams in his history The Epic of America, the phrase originally referred to a “dream of a land in which life should be better and richer and fuller for every man, with opportunity for each according to his ability or achievement... It is not a dream of motor cars and high wages merely, but a dream of a social order in which each man and each woman shall be able to attain to the fullest stature of which they are innately capable, and recognized by others for what they are.” If it seems to you like that definition, one of pure idealism, is slightly different than the one we use today, you’re right. The concept of the American Dream has changed several times since then. Each change in the popular conception of the American Dream reveals the aspirations of the generation that lived it and the problems they faced.

How has it changed since then?

During the economic doldrums of the Great Depression the phrase “American Dream” most often appeared on advertisements for plays, books, articles, and other intellectual goods. It did not refer to material success, but to the ideals Mr. Adams elaborated on.

Even after WWII, the idea was still, generally, idealistic. The Chaplin of the U.S. Senate stated the dream consisted of “Religious liberty to worship God according to the dictates of one’s own conscience and equal opportunity for all men.” Dr. King referenced it during his “I Have a Dream” speech in 1963, saying that his dream of equality was “deeply rooted in the American Dream.”

Martin Luther King Jr.'s speech, delivered on the steps of the Lincoln Memorial, directly references the equality of opportunity and social standing that Adams had mentioned in the 1930s. (Getty Images)

Despite the surplus of idealistic notions, the idea of the American Dream as a materialist one began to take hold in the 1950s. The G.I. bill made home ownership and a college education possible for millions of veterans, television started pushing the ideals of suburban living, and an ever-rising standard of living promoted consumerism in a feedback loop. The move towards materialism was so great then that economist John Kenneth Galbraith feared that American values had begun to decay.

An image of 1950s suburbia with a new car, pre-fab house and all. It can be easy to understand why the children of the Great Depression might be interested in pursuing this kind of life. It would take less than 15 years for another generation to start to rebel against it. (Getty Images)

However, it still wasn’t until the '70s and '80s that advertisements started cropping up that utilized the American Dream as a selling point. Real estate advertising especially hammered home the point that the American Dream had something to do with material wealth and owning a place of your own, for obvious reasons. This idea remains popular, with president George W. Bush signing The American Dream Downpayment Assistance Act to promote homeownership.

This trend towards seeing the dream as a material one has only intensified. Today, Forbes has an American Dream Index that measures purely economic data and makes no mention of the original concepts behind the American Dream as it was viewed in the 1930s.

The ever-changing notion of the American Dream is, in a way, in line with all of these definitions. The idea of a country where you can dream for more and reach higher than the last generation could is a common thread in all of these eras. It is the goal which changes, though in many ways it may be that it was only being identified more clearly.

The idea of the American Dream also has facsimiles around the world. In Australia, there is the Australian Dream of homeownership bringing security. Chairman Xi Jinping of The People’s Republic of China has promoted the Chinese Dream, which has many similarities to the American one. Even if nobody is quite sure as to what it is, the concept of the American Dream remains well known all over the world. The ever-changing definition reflects an ever-changing country. How will it continue to change as new generations take over? Will it continue to represent shared ideals as we move forward, or will our increased polarization lead to a variety of American Dreams replacing the old one? The only thing that is certain is that a new dream is going to arrive sooner or later.