What Nietzsche really meant: The Apollonian and Dionysian

One God stands for order, logic, and reason. The other stands for chaos, madness, and drunkenness. Nietzsche thinks you need both. 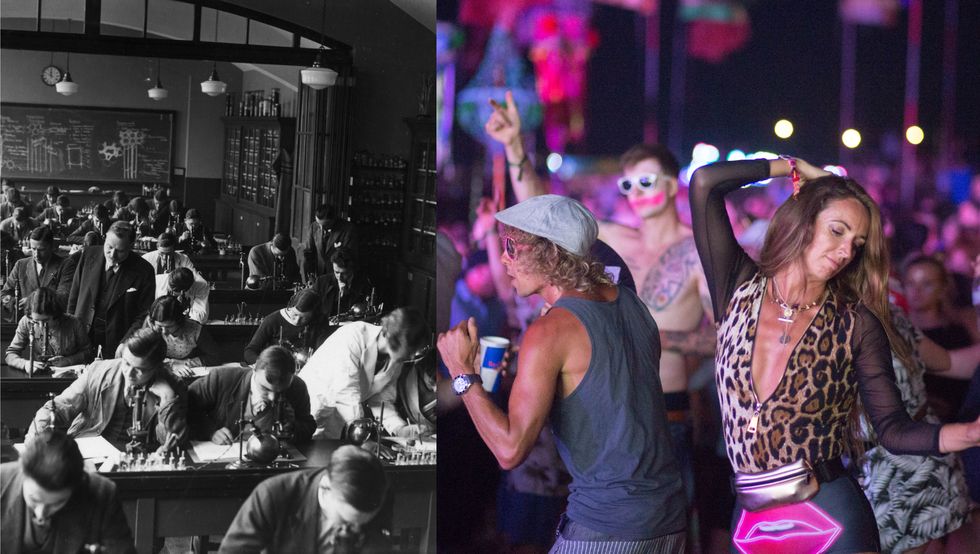 Order, reason, chaos, and madness is within all of us. Nietzsche thinks this is great. (J. A. Hampton/Topical Press Agency/Matt Cardy/Getty Images)

We all know the kind of person who likes to impose order on every situation. They want reason, logic, precise definitions, and despise chaos. Likewise, we all know people who throw order to the wind, follow every impulse they have, are drawn to chaos, and hate restraints on them.

While most of us would look at these kinds of people and see nothing more than personality differences, Friedrich Nietzsche saw an enduring dichotomy inside all of us which emerges from nature itself and can be applied to art, psychology, ethics, and politics.

The Apollonian and Dionysian

In his first book The Birth of Tragedy, Nietzsche examines art, particularly ancient Greek plays. While he didn’t write the last word on the subject, he did use the book to introduce a concept which would continue to appear in his thinking long after he dismissed his earliest work as “badly written, ponderous, embarrassing, image-mad and image-confused.”

The two forces of nature he introduces show up everywhere. While their most famous iteration was as pillars of Greek culture, they can also appear as drives within us and even as historical forces. He names the two halves of this dichotomy the Apollonian and the Dionysian, after two Greek Gods.

Apollo, the God of the sun, truth, light, and logic, is the namesake for the first, ordered, half. This is the half that covers everything which is structured. Sculpture, an art which is pure form, is the most Apollonian art.

Rational thinking, which is based on logical structures, is also Apollonian. Since this drive tends to put things into their place, it also tends to individualize and distinctly separate people and ideas from one another.

Nietzsche thinks dreams are the most Apollonian state we can experience. He bases this on the idea that we understand what we see when dreaming isn't real, but merely an image. It has been suggested that he was a lucid dreamer to explain this strange notion. Dionysus, the God of wine, festivals, and madness lends his name to the later, frenzied, half. Music is the pure Dionysian artform since it doesn’t appeal to our rational mind but rather to our emotions. The Dionysian doesn’t categorize and tends to blur the boundaries between the self and nature.

The esoteric and mystic cults of the Greeks, many of which were dedicated to Dionysus, offer an alternative to the rationalism of the Apollonian and were noted for their “sexual licentiousness.”

Drunkenness is suggested as the pure Dionysian state. He gives us a fantastic description of the Dionysian when he explains:

“Transform Beethoven’s ‘Hymn to Joy’ into a painting; let your imagination conceive the multitudes bowing to the dust, awestruck- then you will approach the Dionysian.”

Nietzsche suggests that folk music is especially Dionysian and that “it might also be historically demonstratable that every period rich in folk songs has been most violently stirred by Dionysian currents.” This explains a lot about the 1960’s.

Two men ride home after the Woodstock Music Festival; three days of music, free love, and drugs that dissolve the boundaries between self and the cosmos. A more Dionysian event is hard to come by. (Photo by Three Lions/Getty Images)

How can these drives ever be combined?

Getting these two drives to work together is difficult, but not impossible. Nietzsche saw their fusion as ideal, as it allowed the tremendous frenzied energy of the Dionysian to be applied constructively inside an Apollonian framework. He thought the ancient Greeks, perhaps uniquely, were able to blend the two drives in their culture.

In Greek tragedies like Oedipus Rex, dreadful concepts like death, fate, and unfairness were expressed in a beautiful and ordered way through plots and dialogue. The audience viewed these concepts in a Dionysian way since they were watching an unrelatable main character experience them as explained by the chorus.

The chorus' unity and detachment from the action helps the audience to separate from themselves and consider the ideas in the play in a depersonalized way. This allows the viewer to deal with unpleasant ideas in a way that is gentler than frank, Apollonian discussion.

The ability of Greece to fuse the two ideas didn’t last forever though, eventually, the Greeks drifted towards the Apollonian again, to Nietzsche’s disappointment.

He argues that the movement from plays which focused on great heroes towards subjects that the audience could relate to allowed audiences to judge the people on stage and restored their self-consciousness when watching plays. The audience, now individualized, could no longer get the same comfort from theatre as they could before. Is the Apollonian bad?

It’s not bad at all, but Nietzsche knew that we need both. The loss of the Dionysian in drama and society is, therefore, a loss to our own ability to be complete people- let alone the effect it has on plays.

Even if you’re not a playwright or a classical scholar trying to make sense of Greek Civilization, these concepts can still be of use. We all have both an Apollonian and Dionysian side to us. While many thinkers have downplayed the Dionysian and sought to promote only the rational, structured parts of us, Nietzsche thinks this isn’t just folly but detrimental. He mocks those who try and avoid the Dionysian, saying they :

“turn away from such phenomena as from “folk-diseases,” with contempt or pity born of the consciousness of their own “healthy mindedness.” But of course such poor wretches have no idea how corpselike and ghostly their so-called “Healthy-mindedness” looks when the glowing life of the Dionysian revelers roars past them.”

But this doesn’t mean that you should utterly give into the drunkenness, madness, “sexual licentiousness,” and boundless chaos of the Dionysian. Instead, it means that you should accept that part of you wants those things and strive to harness that energy towards a more constructive goal.

Does this have use elsewhere?

Ruth Benedict has used the dichotomy to describe different cultures in her anthropological work. Camille Paglia wrote a controversial book suggesting men and women embody the archetypes and that there is a biological cause of this. Freud, whose ideas covered similar ground as Nietzsche's, described the Id in Dionysian terms.

While Nietzsche later dismissed his first book, the ideas he put forward in it are still of great interest. His understanding that we all have forces of reason, irrationality, structure, chaos, individualism, and cosmic unity within us all would later inform his psychological insights.

While his theories on aesthetics might not have been the end all answer he was looking for, the Apollonian and Dionysian dichotomy remains a useful way to view art, psychology, and society.