A new study shows that the worse off you think you are, the more likely you are to choose the steak over the garden salad. 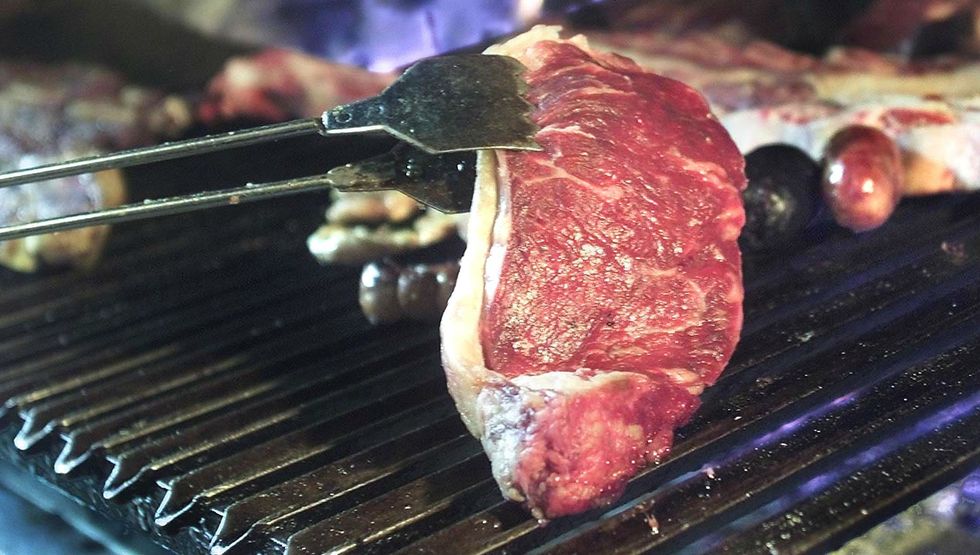 A tasty looking hunk of meat. According to this study, it also comes with a side of perceived social status. (MIGUEL MENDEZ/AFP/Getty Images)

Humans have long associated eating meat with affluence. Even today, people with lower social status tend to desire meat more than people who are better off as a result of this old attitude. This, according to a new study from Dr. Eugene Chan and Dr. Natalina Zlatevska, could be a significant concern for advertisers, doctors, and food stores.

The study, published in the appropriately titled journal Appetite, suggests that we still associate meat with status and that the lower you are on the social scale, the more likely you are to ask for the steak than the veggie burger.

How did they prove this?

Over the course of several tests, the researchers found that the desire for meat was connected to a person's preserved status and not the item in question, nutritional value of the food, or the how hungry the test subject was at that moment.

One test experiment involved showing subjects the packaging of the “beast burger," which was described as having either a meat or vegetable patty and asking them how much they wanted to eat it. As expected, the subjects who ranked lower on the social scale had a much higher desire for the meat-based burger than the vegetable one despite the similar packaging and nutritional information.

In every case, the worse off a person claimed to be the more likely they were to favor the meat-based dish. Individuals who supposed themselves higher on the social ladder were nearly as likely to choose the vegetable item as the meat one.

Why do we do this? Why do some people really want meat dishes?

“There is a symbolic association between eating meat and strength, power and masculinity. It is traditionally a high-status food, brought out for guests or as the centerpiece of festive occasions, so we wanted to better understand this link to status."

"Our research reveals that while eating meat appears to confer feelings of power and status, this may have health implications for those who see themselves as lower on the socio-economic ladder."

Since the study took care to control for factors such as the subject's current mood or the food's nutritional value, the researchers conclude that “the results suggest a symbolic link between meat and status" that some people are influenced by when making dietary choices.

Given that for most of history poor people have gone without regular access to meat, this makes some sense. However, given the dramatically increased availability of processed meats over the last few decades this connection can lead to choices that are bad for our health for the sake of feeling a bit more affluent. So, people eat meat to feel more affluent. How can we use this information?

Since research shows that eating too much red meat is terrible for us, this tendency towards meat could have adverse health effects that are difficult to counter.

As the study showed people were unconcerned by the equal nutritional value between meat and non-meat options, attempts to improve the public's health might have to play up the increased risk of death correlated with eating too much red meat to actually succeed in getting some people to eat less of it.

Doctors encouraging people to cut down on red meat might find it easier to get through to people now that they know why they are inclined to eat so much of it. Policy makers concerned about the state of public health will also find it useful to know that the worst off in society have a bias towards eating meat that will be difficult to change.

The study was carried out by marketing psychologists, all but assuring the next wave of food advertisements will capitalize on this phenomenon. It might also explain the extreme prevalence of meat in commercials for fast food chains and mid-tier casual restaurants we already see.

For much of human history, meat was an item reserved for the rich and powerful, or something saved for a special occasion. This seems to have remained in our culture and psychology long after meat became widely available.

While it is all but assured that advertisers will capitalize on this now that they are aware of it, there is also the chance that we will use this to improve our eating habits. In the meantime, I think I'm going to get a hamburger.