Here are four great brains from great minds, and how they differ from yours. 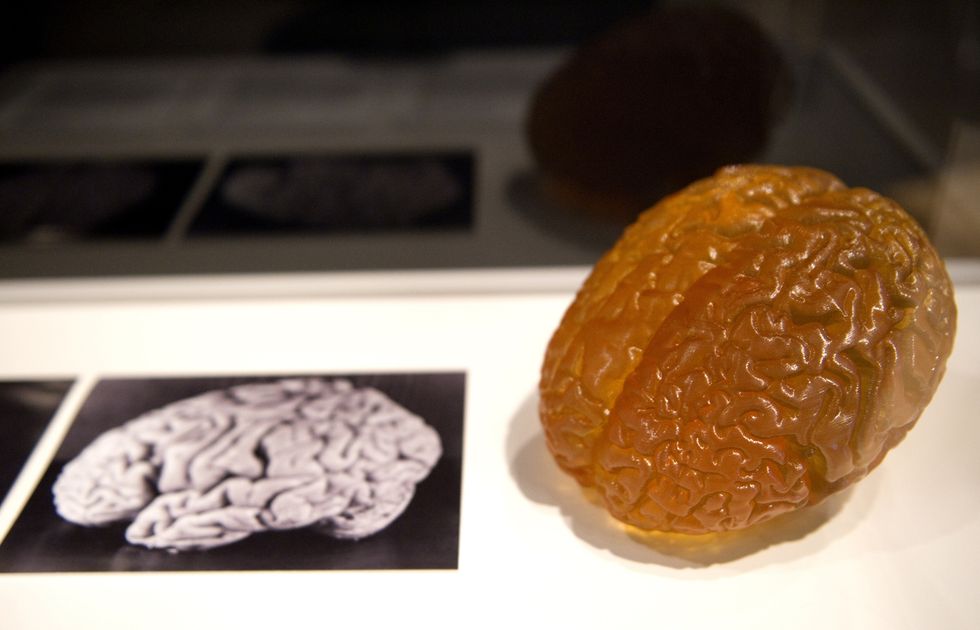 A picture shows a picture and model of Albert Einstein's brain on display during a preview of the Wellcome Collection's major new exhibition 'Brains: mind of matter' in London on March 27, 2012. (MIGUEL MEDINA/AFP/Getty Images)

So, here are four great brains from great minds, and how they differ from yours.

German-born physicist Albert Einstein's Theory of Relativity led to a complete revision of the scientific understanding of space and time. (Chung Sung-Jun/Getty Images)

Einsteins’s brain was taken, without the permission of his family, by Thomas Stoltz Harvey after Einstein’s death. His brain was preserved, photographed, dissected, and even mailed to other scientists in hopes that studying it might uncover the source of his genius. Over decades, several interesting features of his brain have been discovered, including more extensive connections between the two hemispheres of his brain, a lighter than average weight, and an enlarged lateral sulcus.

The part of his brain dedicated to mathematical and spatial thought, the inferior parietal lobe, was larger than average as well. If you would like to view his brain, it can be seen in the permanent exhibitions of the Mütter Museum in Philadelphia, Pennsylvania.

View taken at the Musee de l'Homme (Museum of Mankind) in Paris, on March 5, 2009 shows the skull of French philosopher, mathematician and physicist Rene Descartes, part of the department of Anthropology. Descartes died in his 50s in 1650 from pneumonia in Sweden, where he was teaching philosophy to the country's Queen Christina. (PATRICK KOVARIK/AFP/Getty Images)

Rene Descartes was a French philosopher, famous for the declaration “I think, therefore, I am.” He is of such stature in philosophy that his work is considered the dawning of the modern era. In mathematics, for those who have suppressed memories of high school geometry, Descartes invented the Cartesian plane, allowing algebraic ideas to be expressed geometrically.

Descartes' brain has long been dust in the wind, considering that he died in 1650. Scientists have, however, recently studied the shape of his skull looking for clues as to how his brain might have differed from the norm. Using a CT scan, scientists learned that his skull is rather normal, suggesting that his brain was as well—with the single exception of a bulge in the frontal lobe area, which may correlate to the part of the brain responsible for applying words to abstract notions.

A German mathematician of tremendous achievement, Gauss’ brain was studied after his death by noted neuroscientist Rudolf Wagner. His brain was determined to be heavier than average, and to have very notable convolutions throughout, which were hailed as the source of his intelligence. His brain was accidentally switched with that of physician Conrad Heinrich Fuchs, who died the same year, and was mislabeled for the better part of 150 years. The error was only discovered when MRI studies of both brains found they differed significantly from drawings of the brains made by Rudolf Wagner.

Photographed for the first time in 30 years, the embalmed body of Russian Bolshevik revolutionary leader and Soviet Union founder Vladimir Ilyich Lenin lies 28 October 1991 in the Mausoleum (built in 1930) bearing his name in Moscow's Red Square near Kremlin Palace. The body may be viewed by the public. (AFP/Getty Images)

Lenin, famous for leading the 1917 Russian revolution, had his brain removed shortly after his death at the behest of Joseph Stalin, with the understanding that it would be examined to prove Lenin was a genius. His brain was kept for a few years by the communist party and was later studied by Dr. Oskar Vogt, a German neuroscientist, at the request of the Politburo.

To nobody’s surprise, it was found after comparing Lenin’s brain to that of “average people” and a few men of letters that he was an undisputed genius with a brain to match, having “giant” pyramidal cells behind his revolutionary rhetoric. It was even noted how well organized and undamaged his brain was, despite the fact that he suffered four strokes.

There you have it, some geniuses have brains which seem to support their great works, others seem to have rather banal brains. Neuroscience is still trying to understand how brain shape affects intelligence and how substantial those relationships might be. So always remember that “genius is one percent inspiration and ninety-nine percent perspiration”. Of course, the man who said that might not have had giant pyramidal cells.