31% of U.S. voters think a second Civil War is likely

A recent poll shows a third of Americans think another civil war is likely. How worried should we be? 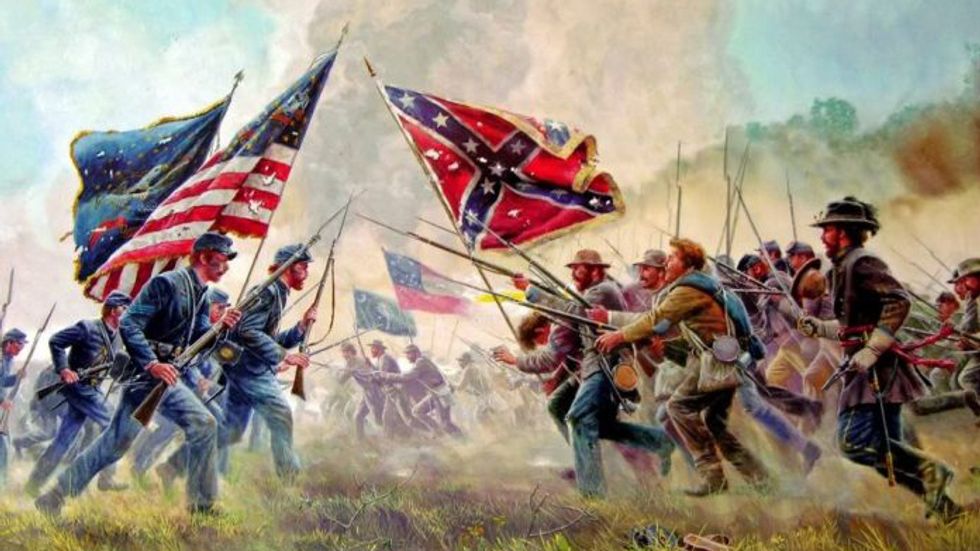 The first Civil war as painted by Mort Kunstler. What would a second one look like?

The United States is as divided as it has been in decades. 55% of Americans think the country is less united today than it was when Trump took office and 13% of Americans have ended a friendship over political issues. Our disunity extends to where we decide to live, with many areas of the country becoming ever more politically homogeneous.

While you can question if the country was ever really united, there is little doubt that between significant partisan disagreement on fundamental moral issues and our increasing hostility towards members of the other side that the country is in a precarious spot.

It might not be surprising then that when Rasmussen Polling asked people “How likely is that the United States will experience a second civil war sometime in the next five years?” 31% of respondents said they thought it was likely with 11% saying it was very likely.

The same poll found that 59% of Americans are concerned about violence from those who oppose Trump’s policies and that 53% of people fear those who dislike how the media portrays the president will also resort to violence.

It isn't even across all demographics, however. 37% of Democrats polled said that a new civil war was likely, making them slightly more concerned than Republicans (32%) or non-affiliated (26%) respondents. The pollsters also state that “Women and those under 40 are more worried about a possible civil war than men and older voters are.” The data also suggests that white Americans are less concerned than Americans of other races about violence breaking out. How accurate is this polling data?

Rasmussen Reports is one of the more prestigious American polling companies. It has been rather accurate over its history, with only a few minor slip-ups here and there. There is no reason to think this data is inaccurate.

However, it is often criticized for having a skewed methodology and conservative bias. Nate Silver of Five Thirty-Eight has pointed out that most of the population is unlikely ever to be contacted by Rasmussen because of their methods, which include only calling landline telephones. This is why they are also assumed by the Five Thirty-Eight crew of having a slight Republican sampling bias when comparing polls.

Others, such as Jonathan Chait, have pointed out that the wording of some questions Rasmussen asks naturally incline the person polled to answer as though they were a conservative. Since how questions are worded can influence how people will answer, this is an important critique. What are the experts saying?

Former Secretary of Labor Robert Reich has mused that while a second civil war isn’t likely, an attempt to impeach Trump would probably lead to serious social unrest.

Iowa Congressman Steve King, however, suggested that “America is heading in the direction of another Harper's Ferry. After that comes Ft. Sumter" on his twitter feed. It does seem that even if a second civil war isn’t too likely, there is an agreement that an increase in unrest is probable.

So, should I try to move to Australia now or what?

In many ways, this belief has the traits of a self-fulfilling prophecy. If you really think that violence by the other side is imminent you are going to act accordingly. As history shows us, this can often include preemptive acts of violence.

Such actions can make the situation spiral out of control in a hurry. The mere fact that so many people think this is a possibility might make the event more likely.

On the other hand, things looked a bit more precarious in the lead up to the Civil War than they do now. Political violence in Kansas over the slavery question lead to open warfare and made national headlines for years before Lincoln’s election. In 1856, A southern Congressman beat a Northern Senator with a cane on the Senate floor over his objections to slavery. Two years after that a brawl took place in the House over similar issues.

It got worse during the election of 1860. The runner-up was Southern Democratic candidate John Breckinridge, who was known to be sympathetic to secessionist ideas and later served as the Confederate Secretary of War. Even before the votes were cast, General Winfield Scott advised President James Buchannan that at least seven states would secede if Lincoln won and that the army should be deployed.

All of this took place within living memory of the Nullification Crisis, which nearly ended in civil war itself. While we are currently enduring an era of increased political violence, none of the events mentioned above have modern equivalents. Likewise, while states like Texas, California, and South Carolina have toyed with the possibility of secession in response to government policies they don’t like, this is mostly grandstanding and none of them have taken any practical action towards this end.

We also tend to mock the people who say that this is likely.

Alex Jones, an influential conspiracy theorist, predicted that members of the Democratic Party would start a civil war on July 4th, 2018.  Twitter, as expected, has made a rather funny joke of his insane rating. A whole meme has appeared with people describing their second civil war experiences in the style of letters from the 1860’s. Others made fun of Jones’ prediction, by complaining that they didn’t get an invite.

It should also be remembered that just because people think something is likely doesn’t mean it will come to pass. After all, many people thought a war against the Soviet Union was going to happen at some point. While the poll results above seem high, they are similar to the ones seen ten years ago when Obama was president. It might be the case that some people just always worry about large outbreaks of violence.

America is clearly divided right now. Our ever-decaying political discourse and strained institutions have led a plurality of Americans to think warfare is imminent. While this may be hysteria, the fact that so many people think we have gotten to that point is problematic in itself. Historically, the future has been hard to predict and these sentiments might be proven correct or dismissed next week.

In the meantime, trying to prevent a war through empathy might be a good path to take.