Why Is the United States So Divided? Simple, It Was Never United at All.

The United States of America is as divided now as it has ever been. Why is this? One author suggests that it is because we have never been one united nation, but 11 differing ones. Founded for different reasons and striving towards conflicting goals, can they ever learn to get along again? 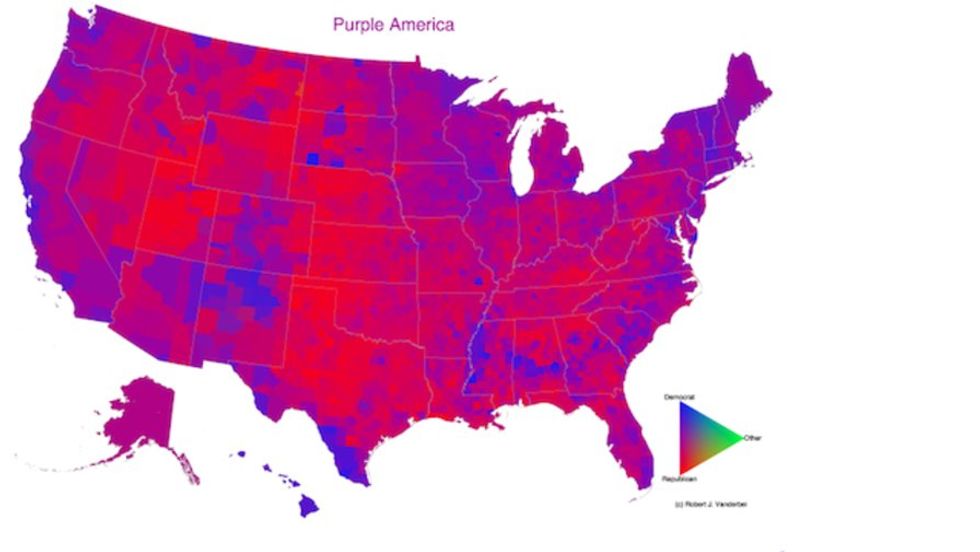 Is the United States purple or horribly divided? Look closer.

The United States of America is as divided as it has been for at least 100 years. The two major parties disagree on if certain problems even exist, and most voters vote not in support of their candidate, but in opposition to the opposing one. It can seem like the regions of the country are truly differing nations.

But why is this? Why do we disagree on such fundamental issues now?

According to author Colin Woodard, it is because Americans never did agree on fundamental issues, and North America is really comprised of 11 distinct cultural regions which battle for political and social supremacy constantly.

The differences in the regions, he argues are not only cultural and political, but also linguistic, religious, and even show up in what holidays are celebrated: with some nations celebrating Martin Luther King Jr day, and others celebrating Robert E Lee’s birthday.

Should we return America to concern for the common good? Or return to rugged individualism? Are we one nation under the one true God? Or is there strength in our diversity? Different regions suggest different answers, and view each as the "true" American values system.

The idea of the United States being a union of cultural regions is not a new one, the idea has existed in some form for decades, but Woodard’s model is the newest and perhaps most comprehensive. His division of the continent includes the following regions: A map is available here.

Yankeedom: Consisting of New England and the upper Midwest, this region was founded by radical Calvinists determined to build a city on a hill in the new world. This region is notable for the value it places on education, its acceptance of state regulation, a Utopian mindset, and citizen activism. Formerly quite religious, it is now dedicated to a “Secular Puritanism”.

The Midlands: Stretching from Pennsylvania to the plains, this region is the most typically “American” of them all. Founded by Quakers and populated by Germans at the time of the American Revolution. This region has been moderate, unconcerned with ethnic or ideological purity. The key swing region in national politics.

New Netherland: The area in and around New York City, this region was founded by the Dutch as a money making venture. Interested more in trade then moral questions, this region finds itself more comfortable with diversity of all kinds then almost any other region. An economic powerhouse, it still tends to ally with the economic regulation minded Yankeedom.

Tidewater: Occupying the area around the Chesapeake bay and founded by the English Gentry as a semi-feudal recreation of England. This region dominated early American politics, but soon declined with its lack of space to expand. Today this region is being eaten by the D.C exurbs.

Greater Appalachia: Stretching from the Appalachian mountains to Texas, this region is filled with the descendants of Irish and Scottish immigrants. Placing a value on personal liberty, family, and a warrior ethic. This region has been suspicious of both Deep South and Yankeedom’s schemes to dominate the country.

The Left Coast: A wedge stretching from British Columbia down to Central California, this region was boxed in by the Pacific and The Far West region. Founded by Yankeedom settlers, and then populated by Greater Appalachian settlers after that; this region is a hybrid of Yankee Utopianism and Appalachian individualism. It often battles with its neighbor, The Far West, for control of the states they share.

Deep South: Stretching across Dixie, this nation is the other superpower region. Established by Slave owners from the Caribbean colonies of Great Britain, this region was intended to recreate those societies. Marked by single party rule, the domination of a single religious denomination, and the enshrinement of a racial caste system for most of its history. It stands opposed to Yankeedom, and supports regulation on personal behavior while opposing economic regulation.

New France: Consisting of New Orleans and Quebec province, this region was founded by the French fur traders and settlers. The most Postmodern region in North America, they are remarkably tolerant of alternative cultures, comfortable with state regulation in the economy, and value multiculturalism. It is this region which draws Canada to the left of the United States politically.

El Norte: The oldest nation listed, and consisting of Northern Mexico and the area around the border with the United States. Independent minded, hardworking, and a hotbed of reform and revolutionary ideals. The American portion of this region is notable for its unique culture, and the Mexican portion for its attempts at independence.The Far West: Founded by especially tough settlers who were able to stick it out in the difficult climate and their financial backers in the eastern cities and Washington who made it possible. This region is the most individually minded of them all, reflected both in their culture of individual liberty and their politics.

First Nation: The areas of Canada that were never overrun by European settlers, these areas are still controlled by the original inhabitants and have largely retained their culture. Covering a massive territory, but it has a population that is less than 300,000

Of course, the idea isn't that everybody in each region acts like everybody else. These are generalizations. It is more so that at the national scale we can see these cultural regions, and at the local level we can still see the diversity one would expect.

So, what does this mean for our national disagreements?

Yankeedom and Deep South, Woodard argues, have dominated coalitions for the last two hundred years. The Northern coalition typically consists of Yankeedom, New Netherlands, and The Left Coast, while the Southern Coalition has typically been The Deep South, Greater Application, Tidewater occasionally The Far West. The Midlands and El Norte have been the swing regions politically. Whoever can take the swing regions, he points out, has been able to seize the federal government and enforce its will on the rest of the union.

Woodard does write in the final chapter of his book, that the union is increasingly in peril. Most Americans now live in counties that were taken by the winning candidate by more than 10% in the last election. This is in line with his predictions, as he notes that we use our mobility to move to like minded areas rather than blend our cultures. This is what leads to our current situation, as regions become less able to communicate across cultures, and the gap between left and right grows larger.

A map of the United States at the time of the Civil War, wait, this looks familiar... (credit to commons.wiki.org)

Will the union dissolve? Should it? Can it be saved?

Woodard himself suggests that the system should be changed, either to one where the balance of power is less precarious or one where control of the federal government is less of a prize to the coalitions. Strictly speaking, secession is illegal, but might it be desirable? Some of the differences in our current cultural and political climate do seem insurmountable. As Woodard himself describes, the differences between the regions on gun control and the death penalty demonstrate the difficulty in getting regions to agree on the key issues of our time.

Perhaps the U.S should call it a day? Though the United States clearly has been through worse before and come out on top in the end.

It is possible to view the United States and Canada as being comprised of various cultural regions. These regions bicker and disagree on major issues and fundamental values constantly. The rough edges between them has given American culture its greatest works and distinct tone. But can this union, or any union so conceived, long endure? Perhaps, perhaps not.