10 philosophers on whether money can make you happy

How much money does it take to be happy? How much is too much? These philosophers have a lot to say about money and how it relates to the good life. 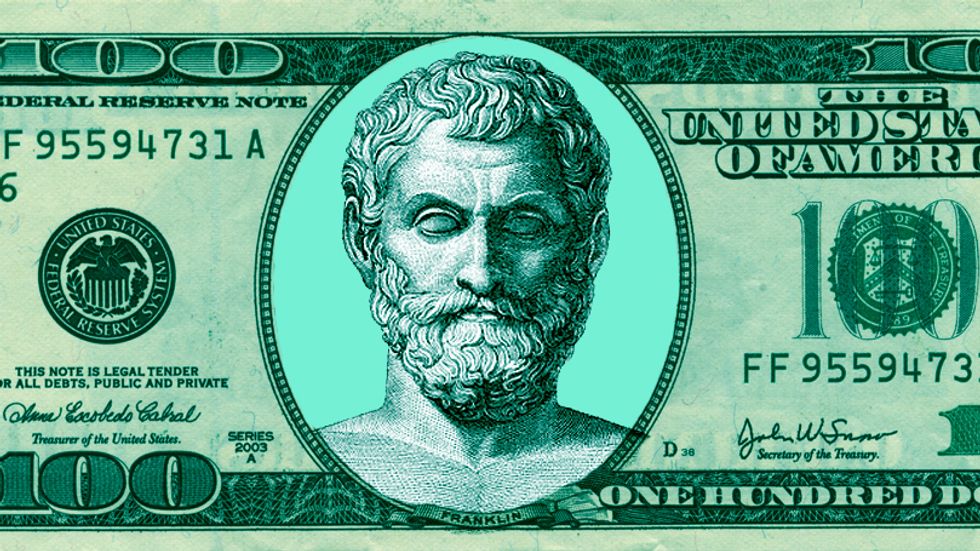 Philosophers have a lot to say about money and how it relates to the good life. (Credit: Public domain/Big Think)

Money. It's either the root of all evil or the best thing ever. People have been arguing about the merits of wealth since they started saving it up. We've all faced the question of if we should pursue money for its own sake, or if we would be better off without it.

Science increasingly shows that there is a right amount of money for happiness, but that countless variables make the amount change for little reason. The problem must be approached another way.

Philosophers have asked the same question. Every thinker who has tried to answer the question of how to live has had to wonder how much money was right to have. Here, we have the ideas on how money affects happiness from ten philosophers that might help you decide how much money is enough.

In Aristotelian philosophy, virtue is the key requirement for a life well lived. But while his stoic contemporaries thought virtue alone would assure a good life, Aristotle knew that a few other things would be needed. Among them are friendship, good luck, and money.

While he saw money as merely a tool to promote other goals, he is open about the fact that the good life requires that you have a fair amount of it. One of the items on his list of virtues needed to live a full life is magnificence, which involves the donation of large sums to charity.

He warns against the life dedicated to pursuing money, however, as this is a life spent chasing something which is “useful for some other end" without ever reaching that end.

"The life of money-making is one undertaken under compulsion, and wealth is evidently not the good we are seeking; for it is merely useful and for the sake of something else." —Aristotle, Nicomachean Ethics

Henry David Thoreau is famous for retreating to a cabin near Walden pound and writing a book about his experiment of living a simple, self-sufficient life in the wilderness. While his experiment is often presented as more than it was, his cabin wasn't that far from a town and his mother usually cooked and cleaned for him, his ideas on the simple life are still worth considering.

His time in the woods showed him the benefits of living simply; such as how much humanity can gain by spending more time in nature and how getting away from material pleasures can help us live a fuller life. While his self-imposed situation came with great security, we can all stand to learn from his ideas on how to earn less and live more.

Epicurus was a philosopher with some bold ideas on how to make people happy. He lived in the countryside in a large house with a dozen other people where they all lived communally. He argued that the path to happiness was moderation, strong friendships, and philosophy.

Rather than accumulating wealth, one should try and live a simple life and find joy in things like friends, the pleasures of work, and philosophy. While he wasn't opposed to having some wealth, he feared that having too much of it would lead a person to live immoderately, which would lead to vice and unhappiness. The moderate life, however, didn't require much money at all.

If you wish to make Pythocles wealthy, don't give him more money; rather, reduce his desires- Epicurus

Nietzsche was one of the prominent members of the chronically asking for money club. His books didn't sell well at all, and he never had much money during his productive years. While he never sought out riches, he didn't preach against them; and he had a lot to say about people who declared wealth to be evil.

He argued that the morality of the gospels was a slave morality which was based on a sort of sour grapes approach to things. Since the authors of the gospels didn't have money or power they declared those things to be evil and the poverty and weakness they had to be good. Nietzsche sees this reactionary morality to be unbecoming of great people.

This doesn't mean that he thought hoarding cash was good, but he does warn us to be wary of the poor man who derides money as evil and useless to our happiness.

“But tell me: how did gold get to be the highest value? Because it is uncommon and useless and gleaming and gentle in its brilliance; it always gives itself.

Soren Kierkegaard was the founder of existentialism and a critic of modern life. Often writing under pseudonyms, he challenged us to examine how we make choices and to accept our freedom long before anybody else was considering such ideas.

In The Present Age Kierkegaard strikes out against how people are increasingly dispassionate, conforming, and detached. He blames, among other things, money for causing some of this. As the abstraction of real value, it tends to make us desire of it rather than the things it can buy or represents.

Kierkegaard implores us to dive headfirst into life and live it fully and desiring too much money is a symptom of not doing so.

In the end, therefore, money will be the one thing people will desire, which is moreover only representative, an abstraction. Nowadays a young man hardly envies anyone his gifts, his art, the love of a beautiful girl, or his fame; he only envies him his money. -The Present Age

Philosophy's saddest genius, Schopenhauer was a pessimistic thinker who felt that most people were doomed to rather unpleasant lives. He was so convinced of this that he was one of the first prominent anti-natalists and wrote that most people were better off not being born. His advice on how to be happy is fittingly strange.

Schopenhauer's great solution to the endless miseries of life is to withdraw from them and live ascetically. Money then, that cause of infinite desire, labor, and strife, is to be avoided. The worst part of his solution is his understanding of how few people could hope to carry it out.

Wealth is like sea-water: The more we drink the thirstier we become; and the same is true of fame. -Aphorisms on the Wisdom of Life

Unlike many thinkers on our list, Franklin was independently wealthy. After a lifetime of wise investments, hard work, and a fair share of luck, Franklin was able to turn his attention to his social projects and not have to worry about money again.

His ideas on wealth were similar to Aristotle's in many ways. He wrote a book on how to earn and save money and associated having wealth with having a least a few virtues. He also agrees that, while good to have, money is at best a tool for getting other things. Unlike Aristotle, however, his list of virtues does not require wealth to live life to the fullest.

The father of modern communism, and the favorite philosopher of many a penniless left-winger. Marx had difficulty with money all of his life and was often provided for by his friend and comrade Fredrich Engels. His difficulties didn't hamper his understanding, however.

Marx reminds us that money, for all the bad things philosophers often say about it, is extremely useful. It drives history, grants the ability to accomplish great things, and often consumes too much of our time. His philosophy of communism isn't so much against wealth as it is an attempt to tame it and make it the servant of humanity rather than the problem it frequently can be. The results have been mixed at best.

Money plays the largest part in determining the course of history.

The founder of Buddhism, Gautama Buddha lived in both extreme wealth and obscene poverty during his life. His time spent on the extremes showed him the wisdom of “The Middle Way" which became a core element of Buddhism.

His life story and later dedication to intellectual pleasures speak against a life of chasing money as the path to Nirvana. However, extreme poverty is no solution either. While many Buddhist monks are supposed to avoid even touching money, the rest of us are encouraged to have the “right livelihood" and earn it virtuously. This also includes not having more than we need.

We are warned that there is too much of a good thing and that we should not suppose that more money is the solution to suffering. Having nothing isn't too much fun either though.

Faith is the best wealth for a man in this world. Righteousness when well practiced brings happiness.- Sutta Nipata

An American philosopher, Needleman has spent decades helping people navigate life. He is often sought out as a consultant on how to handle money at the conceptual level and has a lifetime of advice on how money affects us to give out.

One of his realizations is that money doesn't solve problems or provide answers. While it might assure that we have access to necessities, it won't cure us of worrying about having them. He reminds us that there are things that money can't buy, like happiness, that we must never lose sight of; even if it is nice to be able to buy that trip to Hawaii without saving for it.

Those who criticize the wealthy don't realize that money is needed to do good things.- Jacob Needleman