To land a job, you'll need confidence—and a little bit of fear

Losing your job doesn't have to mean losing your self-respect and self-image. In fact, a little moxie might go a long way. 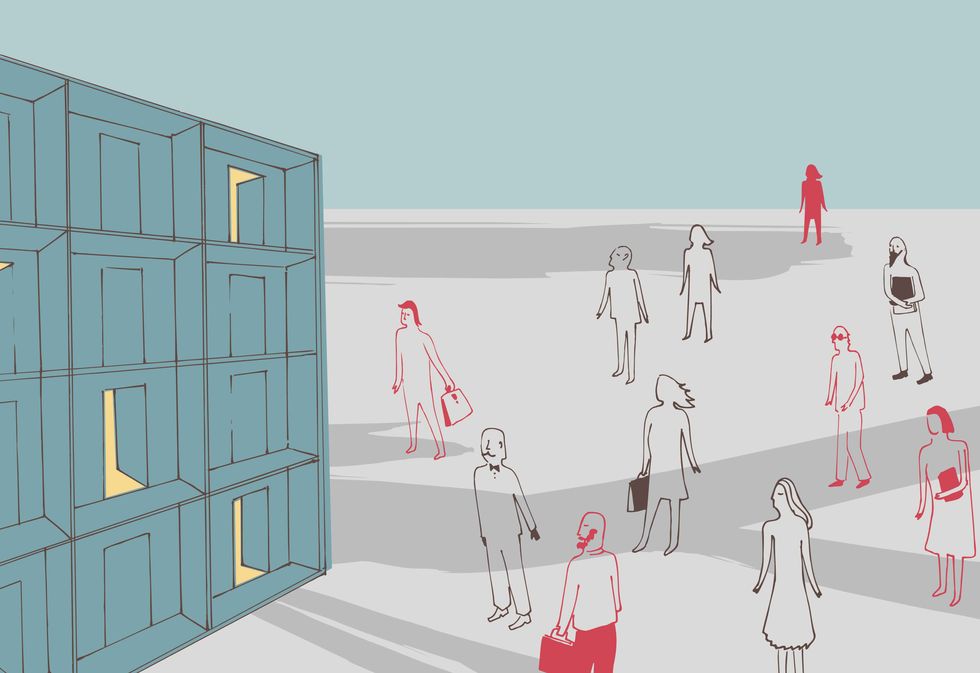 Searching for a job isn’t for the faint of heart. Image by Trina Dalziel/Getty Images

Searching for a job isn’t for the faint of heart; loss of employment fragments one’s sense of self, tears at one’s confidence.

Charlotte Lee, talking to out-of-work bankers and analysts in a Manhattan public space in May, gets that. The career coach and former banker projected self-assuredness as she counseled the group on how to approach the demanding slog of finding work. Standing with palms on the table, in a long, designer blazer, she leans toward her audience and gets to the point.

“You are not bringing your best when you don’t land,” Lee said at the May 23 meeting of the TGIW LHH group. “You do not get to be who you want to be when you’re job searching. We have to be what the market demands. I have to be reasonably soft-spoken and carry a very small stick, and that is not me.”

Brash, forward, with a scoop of grit. Impatient with indecision, intolerant of disrespect and sloth, she grabbed the attention of the 35 or so finance-industry job seekers gathered in the atrium at 42nd St. and Park Ave. When she was out of work, she said she was a whirlwind with frequent lunches, 15-to-20 meetings or phone calls a week, quick email turnarounds. “My metrics were off the chart.

This is the job search trail, where the exhortation to confidence is a common theme, and weakness isn’t discussed. In networking meetings, in articles, the jobless encounter themes like “How to Crush Fears and Get On With Your Job Search”, which appeared in U.S. News and World Report last year. And the jobless may find themselves numbly agreeing, “Confident, Yes, I must be confident.”

Confidence means taking fear along for the ride

We may not ever ask ourselves what it means to be confident when we’re taking this advice. Maybe we don’t see confidence as a mask on the grinding misery joblessness inflicts. Dig around and you find researchers who see confidence and fear in a yin and yang relationship. Confidence may not be anything without fear, and harnessing the latter may be key to restoring confidence.

Larry Cahill, Neurobiology and Behavior Professor at University of California, Irvine’s School of Biological Sciences says courage isn’t the absence of fear, but “taking fear along for the ride.”

“I was amazed to learn, as a supposed expert in ‘fear and the brain,’ that the key problem in, I suspect, most or all anxiety disorders is not the fear symptoms themselves, but the fear of the fear symptoms,” he wrote in an email.

Fear of not providing, of diminished status, of being a bad role model nag the unemployed. University of Toronto psychology professor Jordan Peterson links joblessness with depression, despair, drug use. “One of the most common precipitants of severe depression is unemployment. How can you not be depressed when you’re looking at a world of narrowing opportunities?” he said in this video from 2015 (at about the 36:15 mark).

As routines crumble and cash doesn’t flow, Lee and others go to the heart of that emotional and financial state: get busy, get hired, get normal. “There’s tremendous insecurity when you look for a job and when you are interviewing,” Duke University psychology and neuroscience professor Mark Leary said. “Everyone is terrified at an emotional level.”

But get familiar with what frightens you, he says, and then use it. “People shouldn’t try to crush their fears. Fear is a motivator,” he said. “Recognize it; it can be energizing."

The science and experience of courage and fear

The sympathetic nervous system releases the adrenalin when we feel fear, and the parasympathetic system performs the calming routines. But science isn’t where one finds evidence of courage and anxiety co-existing; rather, personal experience proves it, Cahill said. “I can think offhand of no ‘neuroscience’ validation of it nor do I personally even think it is needed,” he said. “And thus conquering fear-based disorders basically boils down, paradoxically enough, to fully accepting them.”

Emily Juricek, a New York life and career coach who has also addressed the TGIW group, says that too much confidence may make someone appear fake in an interview. This may make an interviewer uncomfortable. Going in a different direction than Lee, Jurick suggests identifying fears helps by “shining a light on and bankrupting them.”

“The idea in literature is that the hero has to have faults or the audience can’t relate as well,” Juricek said. "You bring a level of humanity so that people can connect with you, especially in an interview.’’

I was laid off this past February after 19 ½ years at the same company. My only layoff in nearly 30 years of steady employment. Fear and disorientation lurk and surface as sleeplessness, irritability, outbursts.

At the networking meetings I go to once or twice a week, camaraderie mixes with dread. The volunteers running the Professional Services Group of Mercer County’s Friday networking meetings try to keep things upbeat. Guest speakers at the Princeton, N.J. public library discuss fraud in the job search, salary negotiations, resumes, and attendees make 5-second introductions near the end.

In his June discussion on career transitions, author, entrepreneur, and professor Jack Killion, brought up “moxie” and the need for it while you’re seeking work. That raised a flag for me, and I wanted to press him. I rarely raise my hand, usually listening to the “shut up and sit down” voice in my head. I tried my own therapy this time, acknowledged my fears, and stood up.

“Where does moxie come from?” I asked. “I’m shattered, I’ve lost my job. My confidence is gone. Where does it come from.”

And Killion gave the answer I thought the crowd needed to hear: “A lot of it comes from a fear of failure.”