In 1936, Hitler decided to build the world’s largest tourist resort called “Prora.” It was to be located on the beachfront of the island of Rügen, accommodating more than 20,000 people at once. Prora would be a place for German workers to rest while the Nazi would show the softer side of governing, as opposed to the Gestapo, explained historian Roger Moorhouse.

Projects like Prora were meant to solidify the base of Nazi support. It took over three years and 9,000 workers to create a 2.8-mile-long (4.5km) building that was to be Prora. In an interview with Business Insider, Moorhouse dubbed this brick and concrete structure, one of the longest buildings ever made in Europe, “megalomania in stone.”

Here’s how Prora was supposed to look like – from Nazi marketing: 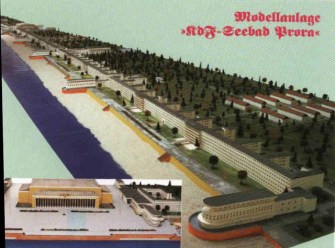 The resort fit into the concept of “people’s community,” or volksgemeinschaft, which originated during World War I and called for breaking down class barriers and uniting people over a national purpose.

The Nazis adopted this notion, calling for the German society to be racially unified. They wanted the country organized as a hierarchy under a mystical racial soul that supposedly connected all Germans. Volksgemeinschaft also regarded the actual German land as an idealized body – the “soil” in which the pure Aryan Germans were to reside as “blood”.

In practice, in Nazi hands, this propaganda was meant to gain the support of the workers. Social welfare programs were instituted to improve the lives of people impoverished by the economic turmoil that followed World War I and the Weimar Republic. A state-run tourist organization was instituted called Kraft durch Freude (“Strength through Joy”) which was set up to promote National Socialism. It quickly became the world’s largest tourism operator in the 1930s.

Strength through Joy shepherded Prora into existence. Here’s Prora under construction in the late 1930s: 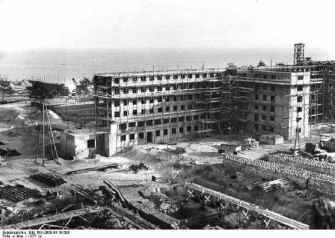 These artist concepts show a festival square and the assembly hall. Visitors were to arrive by ship and proceed to reception halls to be assigned rooms. A small railway would transport people between the housing blocks. 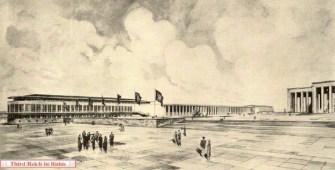 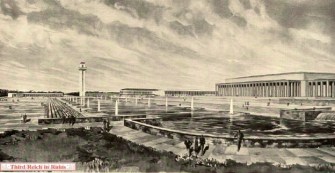 Of course, in 1939 is when Germany invaded Poland and the ensuing World War 2 was not the time for vacations. So Prora was not fully completed. After World War II, the complex was housing Soviet soldiers, then the East German Army.

In 1989, the German government sold the existing blocks to private investors. Finally, in 2013, a real estate company bought the decaying property to turn it into luxury summer homes and an apartment complex. That project should be finished by 2022 but a block of apartments has been open since 2016. Apartments there cost between $400,000 to $725,000.

Here’s a video showing some of the history and the remains of this Nazi construction project: 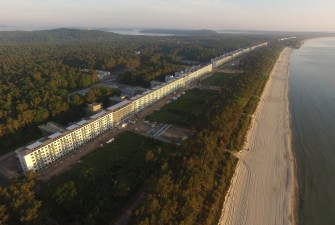 In this aerial view blocks of the Prora building complex stretch along the beach on Ruegen Island on June 15, 2017, in Binz, Germany. (Photo by Sean Gallup/Getty Images) Visitors relax on the patio of a cafe at Block 2, which is being converted into holiday apartments, of the Prora building complex on Ruegen Island on June 14, 2017, in Binz, Germany. (Photo by Sean Gallup/Getty Images)

Here’s what a Baltic Sea-facing view from one of the apartments looks like, according to a marketing brochure: 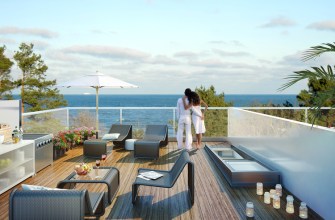 Wizbang innovations capture the public’s imagination, but thoughtful, incremental development is often more valuable to those in need.
Up Next
Politics & Current Affairs

The Bunkers, the Hensels, and the Conjoined States of America

If conjoined twins are forced to get along and share… so can a divided America.