What Don’t We Get About Matter and Antimatter? We Shouldn’t Be Here.

Scientists work out methods for finding the difference between the magnetic moments of protons and antiprotons and see that they’re the same. 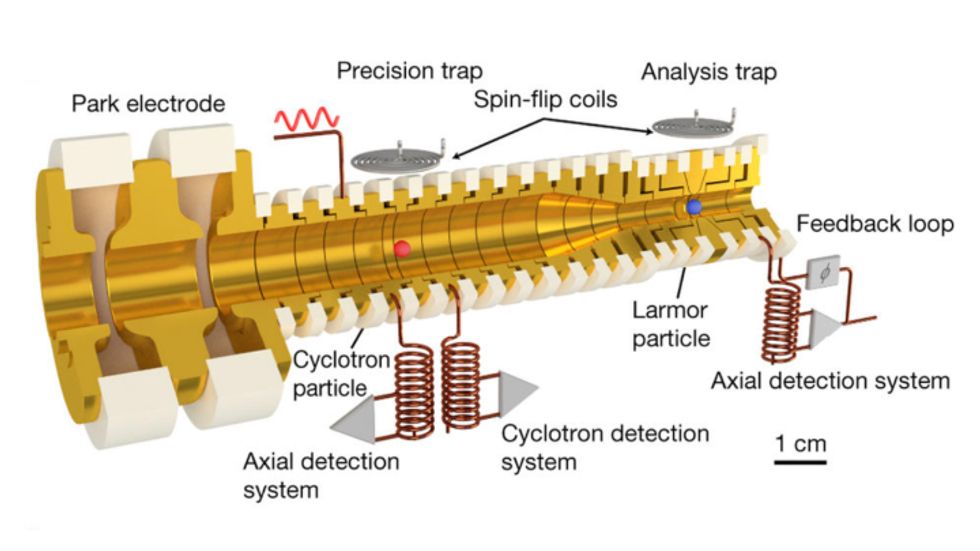 In audio, for example, two identical sound waves that are out of phase in this way produce silence:

So even if, say , you’re talking about identical recordings of something loud like a car horn, you get:

Scientists have been thinking there must be something we haven’t come across yet that makes matter and antimatter not truly identical. A just-released study in the journal Nature reveals the frustrating outcome of a recent search for that difference at CERN. Christian Smorra, a physicist with their Baryon–Antibaryon Symmetry Experiment (BASE) collaboration, says, “An asymmetry must exist here somewhere but we simply do not understand where the difference is,” because, “All of our observations find a complete symmetry between matter and antimatter, which is why the universe should not actually exist.”

Previously, scientists have tried to find some difference other than polarity in matter and antimatter, measuring their mass and electric charge, and with a study last year of the properties of hydrogen and anti-hydrogen atoms: Nothing.

One aspect scientists haven’t been able to compare precisely before were the magnetic moments of the proton and antiproton — there’s been simply no way to do it. ( A magnetic moment is a measurement of an object's tendency to align with a magnetic field.) So ten years back, a team at BASE began trying to work out how they could.

In 2014, BASE announced their first breakthrough: They could measure the magnetic moment of protons by trapping them in a magnetic field and inducing quantum jumps in the field’s spin using a separate magnetic field.

Tricky as that was, performing the same measurement in antiprotons was even thornier, since antiprotons are immediately destroyed when they come in contact with regular matter, such as one of the scientists’ containers.

The team figured out how to increase the the lifespan of antiprotons by holding them in an innovative, purpose-built iridium-sealed copper cylinder.

The chamber is said to look not unlike a Pringle’s can. (SELLNER, ET AL)

CERN describes the operation of the chamber, the most effective antimatter container ever made:

The reservoir trap is inside a cylinder with a volume of 1.2 litres. The particles are trapped by two overlying magnetic and electric fields, which keep the particles in a small volume in the centre of the trap. On one side of the trap there is a metal window, thin enough to allow the antiprotons to pass through but strong enough to ensure complete insulation from the outside. All the other sides of the trap are made from solid copper. The cylinder is then cooled to about 6 K (-267 °C) with liquid helium, so that an almost perfect vacuum is created.

A stream of antiprotons was fired into the frigid container on November 12, 2015, and the team was able to hold them there for an impressive 405 days.

During that time, they were able to run the magnetic moment measurement procedure they used for protons.

Maybe, but, as Stefan Ulmer, leader of the BASE team avers, “This result is the culmination of many years of continuous research and development, and the successful completion of one of the most difficult measurements ever performed in a Penning trap instrument.”

So, for now, the puzzle continues, and scientists will keep sleuthing in hopes of solving this fundamental mystery : Why are we here?