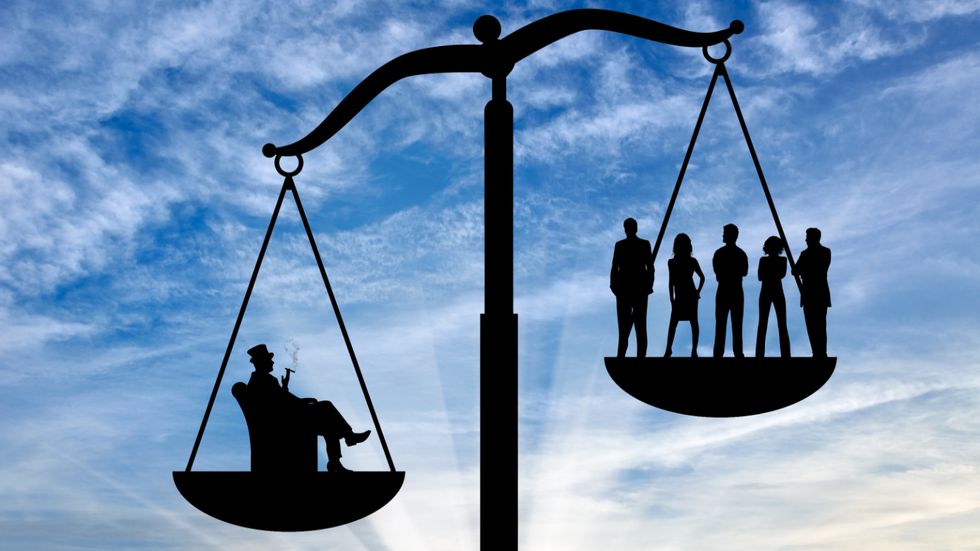 It's a balancing act. If your wages go up faster than wealth is growing, you might have a chance to accumulate some wealth yourself, but if the rich are getting richer at a faster pace than your wages are going up… Well, let's just say we're about to fall completely off the tightrope.

Economist Òscar Jordà of the Federal Reserve Bank of San Francisco — along with a working group of collaborators — has just released a sweeping compilation of economic data from 1870 to 2012, and the inescapable conclusion the statistics provide is ambition-crushing for everyone outside the upper crust. The economies included in the paper are those of Australia, Belgium, Denmark, Finland, France, Germany, Italy, Japan, the Netherlands, Norway, Portugal, Spain, Sweden, Switzerland, the United Kingdom, and the United States. The gap between the wealthy and the remainder of citizens in these countries has been spiraling out of control for some time, it turns out, and according to the study, has essentially reached critical mass, with the difference between the two groups' fortunes only increasingly likely to continue growing apart. The accumulation of wealth in the paper is indicated by the rate of return on items such as real estate, stocks, government bonds, and treasury bills. These are the items one invests in, on the usually accurate assumption that their value will increase, rewarding the investment. Jordà's paper is called “The Rate of Return on Everything," and the team painstakingly collected data using actual asset returns from original market data to construct three return categories:

Another aspect that makes the paper so unique, and its conclusions so inarguable, is that, in addition to the items measured above, it also incorporates, for the first time, a workable apples-to-apples comparison over time between two related indices that encapsulate the two ends of the economic spectrum: house prices and rents. The working group's methodology has allowed them to connect the dots in a manner not previously possible.

The paper finds that wealth has steadily been accumulating over the studied period with a worrying consistency interrupted only by wars.

Noted economist economist Thomas Piketty warned in his 2014 “Capital in the Twenty-First Century," that during times when the rate of return (r) is higher than economic growth (g), or “r > g," inequality is exacerbated. The historical data in the study reveals that the truth of this relationship is more like “r»g."

With the exception of just a few periods, r has been greater than g for most of 150 years, and the gap between the wealthy and everyone else has been exploding accordingly. As the paper concludes, “the weighted rate of return on capital was twice as high as the growth rate in the past 150 years." With that disconnect, it's easy to picture wealth spiraling off into the heavens as growth affecting everyone else staying earthbound, or worse. The paper offers no solutions. It's intended, rather, a new and comprehensive source of data for researchers and policymakers. For the rest of us, it's hard not to feel discouraged about our prospects.