We know that women live longer than men on average, no matter what culture or region of the world we focus on. In many places, they live a full decade longer. And this isn’t a newly discovered phenomenon. Historical records state this was so throughout history. Several studies have looked into it. But scientists are still wondering, is there a biological reason? Or does it have to do with how women are socialized?

Some studies have focused on women being more connected to others. Since it’s more socially acceptable in many cultures for women to divulge their problems to each other and gain emotional support, this has been shown to reduce stress, which could lead to or contribute to longevity. But that’s not the whole story.

A dual Danish-American study recently took a different approach to try and answer these questions. They looked at populations which had suffered a terrible crisis, such as a severe famine, epidemic, or who had been subject to slavery. In these settings, as one might expect, the mortality rate is extremely high. Even then, women tended to live longer than men. Researchers said that rather than focusing on fully-grown adults, they found that the greatest advantage was due to female babies surviving harsher conditions better than males. 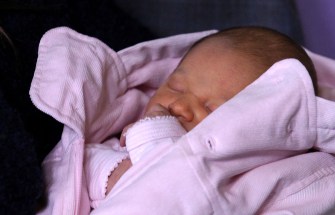 The difference may have to do with a discrepancy in infant mortality rates between the sexes. Credit: Getty Images.

Previous research looked at Mormons, cloistered monks and nuns, and other populations where males are generally protected from risk factors that would otherwise threaten their longevity, such as smoking, drinking, or reckless behavior. Still, even in these settings, women live longer than men.

“Excess male mortality is also found among newborns and infants,” researchers write, “when behavioral differences are unlikely to play a crucial role and social factors may be neutral or favor male survival.” The reason they looked at such extreme settings was, “A finding that men and women have similar life expectancies under these conditions would challenge the notion that the survival advantage of women is fundamentally biologically determined in all environments.”

Although there are anecdotal incidents of crises where women were more likely to survive than men, no empirical data had been sifted through on the subject, until now. Researchers analyzed the mortality data to see what they could glean about the differences in the sexes and how they endure such crises.  Using historical data can sometimes be problematic. But here, researchers say the information used had been published before in peer reviewed journals. They looked at data going back 250 years and surrounding some of the worst disasters in history.

Former slaves brought to West Africa in the 1800s had some of the highest mortality rates in history, mostly due to having little resistance to the tropical diseases found there. 40% died within the first year. While infants born during this time rarely reached age two. 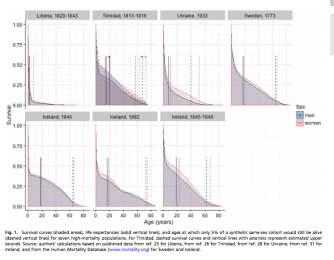 Credit: the Proceedings of the National Academy of Sciences (PNAS).

During the Irish famine, life expectancy went from 38 years-old for both sexes, to almost 19 for men and 22 for women. Girls born during the Ukrainian famine of 1933 lived on average around 10 years and boys, seven. Research Professor James Vaupel at Duke University led the American team, while Assistant Professor Virginia Zarulli at the University of Southern Denmark, led the Danish one. Together, they found that even in environments where mortality is severe, women still outlive men by an average of six months to four years.

Once mortality was broken down by age group, the researchers found that most of the difference came down to female babies being more likely to survive infancy than males. Rather than social reasons, researchers say the root of the discrepancy must be biological. Now whether its genetics, hormones such as estrogen, or differences in how male and female immune systems work, will have to be sorted out in future studies.

To learn more about why women live longer than men, click here:

A textbook pregnancy consists of three trimesters. The baby develops at a relatively predictable rate during this time, from pomegranate seed to avocado to watermelon. And mom’s body adapts accordingly […]
Health

New research from the University of Granada found that stress could help determine sex.
Up Next
Surprising Science

Given the premium placed on slender, lightweight mobile technology, the removal of speakers could free up space inside Google devices. No speakers necessary.