Seeing More Service Dogs Lately? Why Fake Support Animals Are on the Rise

If a passenger claims a pooch is a service dog, there’s nothing much anyone can demand by way of proof. 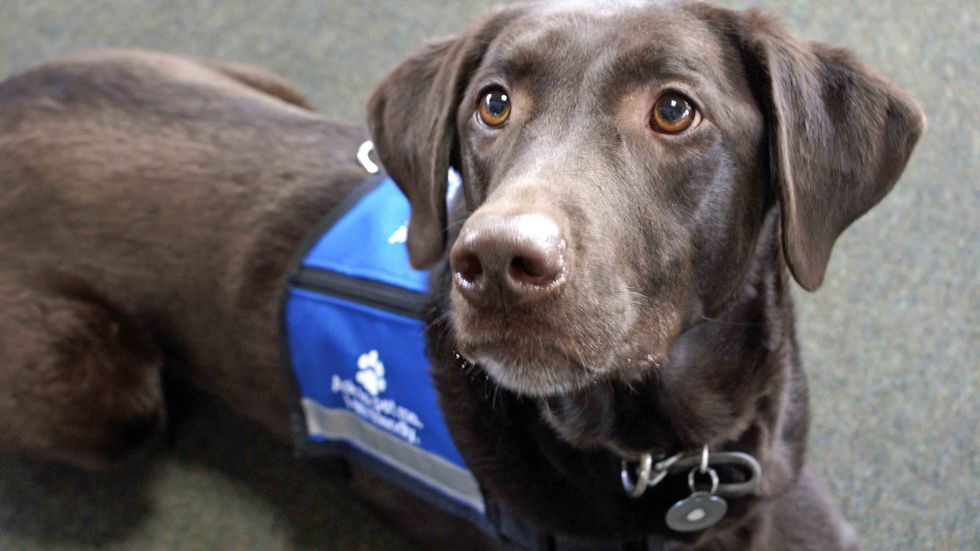 Palmer the chocolate Labrador retriever, an expressive animal, lays looking eagerly off to the left while wearing a blue "ask to pet me" vest. (Shutterstock)

Let’s get this right out of the way: Airlines are notoriously unfriendly to our non-human family members. Want to travel with your best friend? Put her in cargo. Nopenopenope. Yet an increasing number of people are insisting on the accommodation of their animals on airlines — and in other public places like hospitals and restaurants.

A spokesperson for Jet Blue reported that in 2014, 25,000 animals accompanied their owners onboard a plane, an 11% increase from the prior year. What’s been going on is that people are claiming that their pets are service animals, and due to the way the law is structured, they’re getting away with it. While it’s difficult to ascertain how many of these were legitimate, a UC Davis study concluded that the presence of impostors had risen by 1000% between 2002 and 2012.

Real service dogs are allowed to fly. The right of a person with a disability to travel with a service animal is a matter of law, specifically the Americans with Disabilities Act. Its definition of service animals: “Service animals are defined as dogs that are individually trained to do work or perform tasks for people with disabilities.” The only reason a service dog may be removed from a plane or public place is if it’s out of control or isn’t housebroken.

However, the law also restricts the questioning of a person about his or her service animal. This is to prevent discrimination, and it’s thus a good thing, but it carries with it a loophole people are exploiting. The traveler can be legally asked exactly two things, and nothing else:

1. Is the dog a service animal required because of a disability?
2. What work or task has the dog been trained to perform?

An owner can’t be asked about their disability, be required to show documentation or ID, or asked to have the animal demonstrate its training. If a passenger claims a pooch is a service dog, there’s nothing much anyone can demand by way of proof. When travelers have a large dog they want to travel with, therefore, there’s little risk in claiming a dog is a service animal.

Unless its owner has been diagnosed with a disability — PTSD, for example — the ADA doesn’t provided any legal basis for an ESA to remain with its owner in a situation in which pets aren’t usually allowed. On the other hand, the Air Carrier Access Act (ACCA) does establish an owner’s right to travel with an ESA on the passenger’s lap or in a carrier, and at no extra charge. The law is not without limitations, though. Regulation 14 C.F.R. § 382.117 says that a passenger claiming their dog or cat is an ESA must provide a paper statement on the letterhead of a licensed mental health professional that states:

1. The passenger has a mental or emotional disability recognized in the Diagnostic and Statistical Manual of Mental Disorders, Fourth Edition.

2. The passenger needs the emotional support or psychiatric service animal as an accommodation for air travel and/or for activity at the passenger’s destination.

3. The individual providing the assessment is a licensed mental health professional, and the passenger is under his or her professional care.

4. The date and type of the mental health professional’s license and the state or other jurisdiction in which it was issued.

It’s worth noting that a quick Google search of “ESA letter” reveals an entire industry of practitioners offering such letters to strangers for a fee. And it seems that people are being allowed to fly even without a letter after simply claiming ESA status for their pets. It may be that the inability to question service-animal owners creates a reluctance among airline personnel to challenge any animal-bearing customers. Some carriers will accommodate a small, non-ESA pet in the cabin alongside its human, though they charge for it.

My seatmate, CLT➡️AVL, is this handsome duck named Daniel. His gentle quacking eases the sadness of leaving #SFA16. pic.twitter.com/iDKWCceAFi