Divining what the Russian President Vladimir Putin really thinks has implications not only for his country but for the future of the rest the world. Recently, Putin has been expressing some feelings about artificial intelligence that have both intrigued and puzzled observers.

AI came up in Putin’s September 21st conversation with Arkady Vorozh, the head of the Russian tech giant Yandex, during a tour of the company’s headquarters. As Vorozh explained the potential of artificial intelligence, Putin seemed to show ambivalence towards its positive intentions, asking when will AI “eat us”?

After pausing to consider the unexpected remark, Vorozh replied “I hope never”, pitching AI as just another tool.

But Putin did not sound convinced, pointing out – “they don’t think,” presumably referring to the fact that an excavator is not intelligent while AI would be.

On the other side, Putin has previously acknowledged the importance of AI to the future of humanity and global politics. Speaking to students across the country about science on September 1st, at the start of the Russian school year, Putin said that “the future belongs to artificial intelligence.” And whichever nation will be at the forefront of the technology, will rule the world, according to the Russian President.

“Artificial intelligence is the future, not only for Russia, but for all humankind,” explained Putin. “It comes with colossal opportunities, but also threats that are difficult to predict. Whoever becomes the leader in this sphere will become the ruler of the world.”

In the 45-minute open lesson, attended via satellite links by students and teachers from 16,000 schools for a total audience of over one million, Putin also expressed his desire that no one should “monopolize” the AI field. He also offered that Russia would share what it learned with others in the word.

“If we become leaders in this area, we will share this know-how with entire world, the same way we share our nuclear technologies today,” maintained Putin.

Putin’s words prompted a reaction from Elon Musk, who famously continues to warn about the dangers posed by future AI. In a tweet, Musk cautioned that competition for “AI superiority’ could result in World War 3. 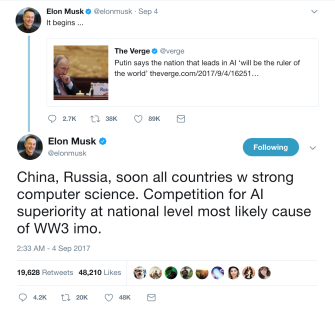 During the visit to the Yandex headquarters, Putin also managed to poke fun at the AI robot designed by the company. Watch that here:

Should we be searching for life on other planets, or technology?
Up Next
Thinking

Why We Need Philosophy Camp for Adults

Go back to school, Agora style. Philosophy can train us to respond to life’s problems rather than merely react. One such training camp is coming to Baltimore.