A new study suggests that it’s possible to replace anxiety-producing unpleasant memories with new ones implanted under hypnosis. 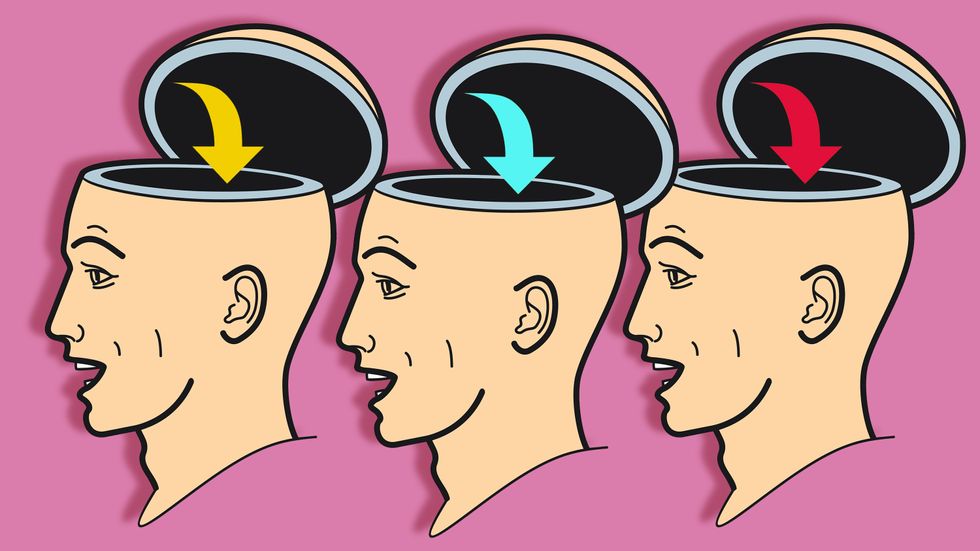 Out with the bad memories, in with the good ones. (Shutterstock/Big Think)

Memories have a funny way of changing as time goes by. For many people, the unpleasant memories drop away, leaving behind only remembrances that produce a warm nostalgia. For, others, notably those who suffer from chronic anxiety, the opposite may happen: Painful experiences reach out from the past with such intensity that they ravage the present day, making it impossible to overcome the emotional damage they inflict. We also know memory can be suggestible. Two psychologists at Lomonosov Moscow University have been exploring the potential benefits of implanting false positive memories in anxiety sufferers to see if they can be freed from their difficult pasts. Veronika V. Nourkova and Darya A. Vasilenko have just released a paper that suggests this can indeed work if it’s augmented with hypnosis.

Assessing anxiety and memories that trigger it

The researchers recruited 120 volunteers—73 female and 47 male. Each individual was assessed to identify those with a greater tendency to anxiety. The study employed Taylor’s Manifest Anxiety Scale (TMAS), getting subjects’ reaction to a set of 50 statements that reveal their emotional state, and in particular, their “anxiety proneness,” as the study puts it. Scores can range from 0 to 50, and anyone who scored 21 or above was deemed to be demonstrating clinically significant levels of anxiety.

Next, anxious subjects were asked to relate memories of past events that still bothered them with the instructions: “Recollect, in as much detail as possible, three episodes from your past that represent to the maximum degree your personal traits that force you to be worried and anxious.”

The 120 participants were divided into groups that could work on neutralizing their troubling memories—or not—using four different approaches:

The tests were repeated twice at weekly intervals for three sessions in all, one per unpleasant memory.

Two examples cited in the study

”ZL,” from the Discussion group

One of the three past incidents that 45-year-old male ZL related to the researchers was this one:

Six years ago, I was invited to rehearse the role in opera. I was invited by a director personally. And there was another singer who was rehearsing the same role in parallel with me. I sacrificed so much effort to make my best, to be part of the premiere. After all, the uncertainty remained until the last day. The cast composition was not announced. This, perhaps, was the moment when I insisted on looking at the schedule and realized that I was assigned to being a cover. I felt crushed; I couldn’t cope with being rejected. I trudged to my make-up room almost crying. Five minutes later the director came in smiling and enthusiastic about the premiere. I was not able to control myself. I jumped up and pushed the director out the door. In a moment, I lost not only my part in the premiere but everything else, too.

In the Discussion group, ZL revisited this memory and attempted to neutralize it by working his way through it:

It would have been better if I’d understood that the director did not want to insult me, but in fact, he worried about the success of the performance. Being the cover was not actually such a disaster. I should have politely thanked him for his advice and guidance. I should have endured the indignity. And then, perhaps, later, I would have been transferred to the main cast ... Even now I could clearly see the surprised face of the director.

”AS”, from the Memory Implantation in Hypnosis group

AS is a 41-year-old woman who told this story from her past:

I was in my second grade. There was a kind of concert at the school. All parents were there. Children stood in a circle and performed one after the other. I wanted to make my father proud of me. I wanted it so much. I was absolutely sure that I’d learned a poem by heart. I felt as if all stared at me ... and suddenly I was speechless. I opened and closed my mouth and I could not say anything. I did not live up to expectations. I had to perform well. Dad in such a case would be proud of me. But I did not succeed. It seemed to me that my father was very unhappy with me.

Under hypnosis using the Ericksonian conversational method, AS was guided to a revised version of the incident:

DV: Could you see the place? Who is there? What do you see around you?
AS: It is loud and hot, and stuffy. Many people around. Parents, teachers...My dad gently pushed me into the circle.
DV: Are you dressed in a uniform?
AS: Yes, a brown dress and a white apron. All girls are festively dressed. I can’t recognize anybody except Vicky. She starts telling a poem. Everybody is applauding. It is my turn now. I get up and start speaking loudly and boldly. About friends ... Words are forgotten.
DV: How would you like to behave from this moment? Try to live through the situation doing your best.
AS: Ok. I am starting “friends, friends.” I cannot remember how to proceed. I’m looking around and make curtsy. I feel mischief and fun. I say “Dear all, I am so sorry I forgot the poem. I can tell you the story in prose”.
DV: How do people react? Your Dad? How are you feeling?
AS: Everyone is smiling and laughing. Dad is laughing, too. I take my place. Dad leans toward me and whispers, “Honey, recite the poem for me at home.”

A few days, and then four months later…

Shortly after the tests, the subjects were again tested with TMAS, and about four months later tested once more to see if their tendencies toward anxiety had changed. Two groups, Discussion and Memory Implantation in Hypnosis, were also tested at that later date to ascertain how strongly their altered memories had been implanted.

All groups MTAS scores from beginning to end (Credit: Nourkova/Vasilenko)

The Discussion and Control group showed no significant change in their TMAS scores either immediately or in the final tests. Also, the Discussion group could easily recall the memory-editing they’d done—their original unpleasant recollections persisted.

The hypnosis group exhibited a reduction in anxiety during the testing just after the experiments, but that effect was gone four months later—in fact, they were more anxious than when they’d started!

For the Memory Implantation in Hypnosis group, though, anxiety had been reduced and remained that way four months later. These subjects also couldn’t differentiate false memories from real ones, meaning that their memory implants had stayed in place.

This result suggests that implanted memories can stick and that they can help with anxiety. Research Digest, however, cautions that “the findings should be considered preliminary and the explanation for the effects is quite speculative. There was no direct measure of self-esteem, for instance, and while the participants’ initial average levels of anxiety were on the cusp of being considered clinically significant, this was not a clinical sample with diagnosed anxiety problems.”

And of course, there are the obvious risks—and ethical considerations—in implanting false memories. What could possibly go wrong? (See Total Recall.)