Next biggest danger to the environment? Household cleaners.

A new study of Los Angeles finds that as car emissions are being reduced household chemicals are taking their place as the main cause of air pollution. 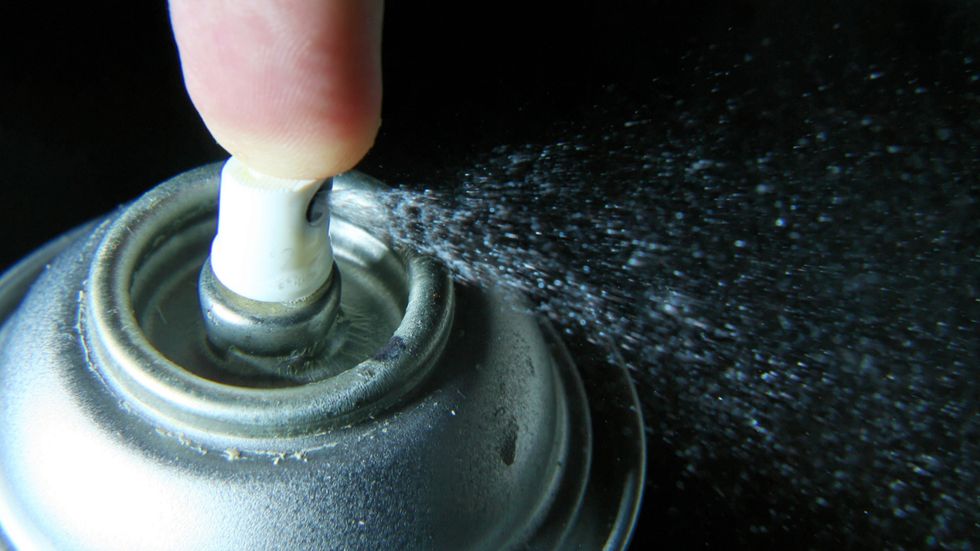 In some places, we're beginning to see meaningful reductions in air pollution from vehicles. While this is good news, it also means it's time to begin to shift our focus to the next most environmentally damaging source of pollution: household products, including such seemingly benign substances as spray cleaners and perfumes. Are these seriously as bad as car emissions? If you're living in an urban area where car exhausts are getting under control they are. A new report from scientists at the National Oceanic and Atmospheric Administration (NOAA) and the University of Colorado at Boulder just published in Science takes a careful look at air pollution in smog-ridden Los Angeles. It's a future-forward study since California is a state that takes clean air seriously—demanding that vehicles sold there meet more stringent emission standards than elsewhere—not least due to its driving-oriented culture. It offers us a peek at the future of other densely populated cities as they take control of their vehicle emissions. And in such places at such a time, household pollutants will likely be as big a source of air pollution there as they are in LA now.

Volatile organic compounds (VOCs) from vehicles have long been known to be the source of a significant amount of particulates in the air and a threat to Earth's ozone layer, and they're damaging to human lung health. This awareness has led to genuine progress in reducing the presence of VOCs emitted by vehicles.

While VOCs can actually remove greenhouse gas methane from the air, when they interact with sunlight and atmospheric gases they form tropospheric ozone—smog—and particulates.

The EPA doesn't track VOCs from household sources. VOCs produced by household product chemicals are not being seriously inventoried at all as of yet, and the new paper suggests that they're likely present in the overall U.S. atmosphere at up to the three times the assumed levels. This report constitutes a major wakeup call, concluding that “the use of volatile chemical products (VCPs)—including pesticides, coatings, printing inks, adhesives, cleaning agents, and personal care products—now constitutes half of fossil fuel VOC emissions in industrialized cities." (Our emphasis.) “That's really the punchline of this paper," says lead author Brian McDonald, talking to Popular Science.

VCPs are a subgroup of VOCs. While there are laws aimed at keeping VOCs to a minimum, many of those laws exempt VCPs.

Paper co-author Jessica Gilman tells The Independent, “Gasoline is stored in closed, hopefully airtight, containers and the VOCs in gasoline are burned for energy. But volatile chemical products used in common solvents and personal care products are literally designed to evaporate. You wear perfume or use scented products so that you or your neighbor can enjoy the aroma. You don't do this with gasoline." (Our emphasis again.) These products' emissions are “short-lived but highly reactive gases that impact ozone and methane," says atmospheric scientists Atul Jain to Popular Science.

Consider, too, the health ramifications of the fact that these household chemicals are used in closed spaces, that is, homes. To keep utility bills down, we tend to keep our homes fairly airtight, which means these pollutants stay largely locked into our personal environments where they can affect our health and trigger allergic reactions of varying seriousness. The air, even in a smoggy place like LA, is likely to be far safer outside since harmful chemicals can at least dissipate there, though they are still clearly a problem.

Does Febreze really contain 87 chemicals when the label claims 3? (With Associates)

Part of the difficulty in assessing the threat posed by VCPs is that the ingredients of many household products are proprietary—their “secret sauce," if you will. A look at their contents will list vague words such as “fragrance". As co-author Jessica Gilman points out, “If you look on the side of the container you have in your bathroom or kitchen, it uses that single word. But up to 2,000 compounds can fall under that category of fragrances." The researchers were therefore forced to consult publicly available information describing the sorts of ingredients such products typically contain and base their analysis on that.

Thanks to hardware modifications to cars—such as catalytic converters—vehicles' VOC emission factors have been steadily falling, and at this point, VOCs from household products are actually “one or two orders of magnitude higher than automobile exhaust," says the report. This is why they're packing such a punch.

The report offers as an example the fact that acetone levels in LA went up between 1990 and 2019 during a time when gas exhausts were declining. Acetone is in a variety of household products (see below).

What kinds of products are we talking about?

Chemicals cited in the report and products they're found in include:

Getting serious about household chemicals

This isn't the first time we've been through this, and we've shown that by taking the science seriously and drafting new regulations, we can switch to safer compounds and work to mitigate any we may be stuck with. Back in the 1980s, after it was discovered that chlorofluorocarbons in aerosol hairspray cans—and refrigerators and air conditioners—was contributing to the degradation of the ozone layer, the Montreal Protocol banned the use of CFCs, and manufacturers moved to others ways of getting products out of spray cans and cooling. It's impossible to know for sure, but it's estimated that the change may have avoided some 280 million additional cases of skin cancer. “It's all about control," Jain says encouragingly.

Meanwhile, on a voluntary basis, we can switch to water-based paint and use cleaning sprays more frugally. Having indoor plants can also help absorb some of the emissions.

None of which is to say it's time to slow down our efforts at getting vehicular emissions under control. California is unusually conscientious about environmental issues, and in many ways is ahead of other places. Car exhausts still do more to ruin the environment than household chemicals in most places, but the new report is nonetheless a clear, important signal that it's time to start paying closer attention to the damage being done by products we use every day in our homes.