So you’re a vulture, riding the thermals that rise up over Iberia. Your way of life is ancient, ruled by needs and instincts that are way older than the human civilization that has overtaken the peninsula below, and the entire planet.

But that doesn’t mean you’re oblivious to change. Survival means being flexible, wary of new dangers and open to new opportunities. In this case, it means being aware of a strange thing the humans call a ‘border’, more specifically the one between Spain and Portugal.

That border may be an arbitrary and artificial line, but as a vulture who’s with the survival-of-the-cleverest programme, you know better than to stray west of it. Why? Because all the good carcasses are in the east, on the so-called ‘Spanish’ side.

These two maps track the movement of two species of vulture native to the Iberian peninsula: the griffon vulture (Gyps fulvus) on the left, the black vulture (Aegypius monachus) on the right. And while vultures of either (or any) kind can fly hundreds of miles in search of carrion to eat, it is clear that the specimens tracked avoid Portuguese territory like the plague.

In fact, both tracking maps are pretty good at revealing exactly where the Spanish-Portuguese border is. How’s that? No, vultures have no concept of political geography. And the climate, topography, and ecosystems on either side of the border are pretty much the same.

But these birds know their carcasses. In 2001, an EU directive aimed at curbing mad cow disease mandated the immediate burial or incineration of cattle found dead in the fields. Spain—home to 90% of Europe’s carrion bird population—abandoned the measure a few years later, but it’s still on the books in Portugal.

For two to three years, researchers used GPS trackers to record the movements of 60 griffon vultures and 11 black vultures, showing that they rarely ventured into Portugal. Only 13 of all vultures studied flew over into Portuguese territory during the course of the study. Unsurprisingly, vulture numbers in Portugal are low, and local populations are on the brink of extinction. 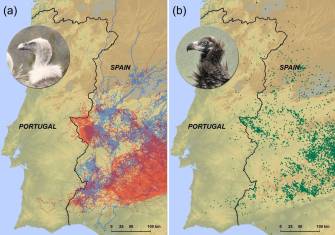 Related
13.8
What kind of intelligence is artificial intelligence?
The initial goal of AI was to create machines that think like humans. But that is not what happened at all.
The Present
What’s effective altruism? A philosopher explains
Some effective altruists “earn to give” — they make as much money as they can and then donate most of it to charities.
Sponsored
How to avoid family fights about money
No family is immune to money conflicts, no matter how much they love each other. Here’s what to look out for.
L&D strategy
Best practices for a needs analysis [Templates included]
Conducting a thorough needs analysis requires care, curiosity, and open-mindedness.
Neuropsych
Memory and the benefits of forgetting
Forgetfulness isn’t always a “glitch” in our memories; it can be a tool to help us make sense of the present and plan for the future.
Up Next
Personal Growth
Eating ‘ultra-processed’ foods linked to cancer by worrying new study
Those at risk for breast cancer should pay particular attention.