Life in orbit is better than you think. Ask Peggy Whitson.

Big Think speaks with the American who’s spent the most time in space, astronaut Peggy Whitson, looking back on what she learned during life in orbit. 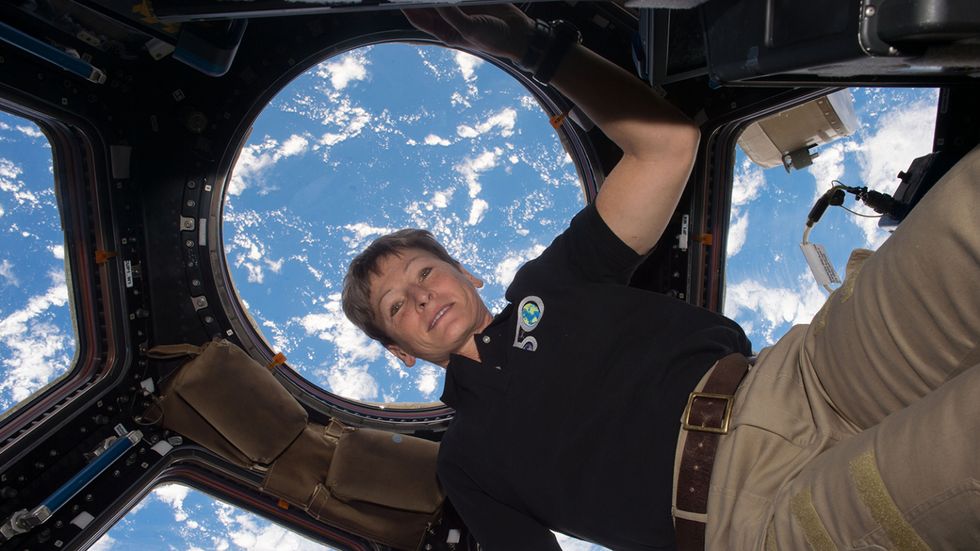 Astronaut Peggy Whitson against the backdrop of earth (NASA)

Just after U.S. astronaut Peggy Whitson’s capsule finally made it down from the International Space station (ISS) and through a scorching re-entry to slam, as planned, into the Kazakstan dirt, she thought, “Wow, space was good.” Also, “Gravity sucks.” She appears in a moving episode of National Geographic series One Strange Rock hosted by Will Smith. “Home” featuring Whitson, airs May 28. Of the impact with the ground, she says, “Most people compare it to a car crash. I would compare it to maybe two car crashes.”

Whitson knows what she’s talking about. After three visits to Earth orbit, no other American has been in space as long as she has. Whitson loves it up there, and at the end of the documentary and her third mission, she seems almost sorry to be back on terra firma. When Big Think spoke to her by phone, we asked Whitson if she’s made her peace with being earthbound, and she says she sort-of has, joking, “I’m willing to stay now.”

Whitson before heading to the ISS (Kirill Kudryavtsev/Getty)

Whitson, 58, first started thinking of going to space as she watched Neil Armstrong land on the moon in 1969, but “it didn’t go from a dream into being a goal” until the year she graduated high school and the first female astronauts, including Sally Ride, were announced. But, “more important to me was that the team included two female doctors, Ellen Baker and Rhea Seddon, plus a biochemist, Shannon Lucid,” explaining, “Since I was interested in biological sciences, that made it seem like it was a realistic career path for me. Luckily, I had no clue what the odds were against it.” After earning her Ph.D. as a biochemist, “it took 10 years of applying and being rejected before I was finally accepted to be an astronaut.”

We asked if she was afraid when the day of her first liftoff finally arrived, and she said no, “I was so excited to be finally, finally be able to live my dream.” And the experience didn’t disappoint: “After a couple of days I’m just like, ‘I can’t believe this is better than I ever imagined it would be.’”

Though a biochemist, Whitson’s conducted a range of space experiments involving “everything, from super-conductor crystals, I grew soybeans, did colloidal suspension of iron, different kinds of gas/liquid flow through columns, combustion experiments. So, all kinds of things.” As a group, the experiments were distinguished by the lack of one specific variable found on Earth: gravity. There were some fascinating outcomes that may benefit us on earth sooner rather than later. For example, she suspects studying the 10-times-accelerated behavior of bone cells in zero-gravity — osteoclasts that build cells and osteoblasts that tear them down — may produce near-term benefits for osteoporitic women. Whitson also cites her work with a drug that fights lung-cancer cells. These cells don’t form properly into tumors in lab dishes on Earth but do “grow more like they do in the human body” in zero-g. Whitson tested using the drug to try and kill lung-tumor cells, and “subjectively, under the microscope, it looked like it was working quite well.”

View of home from the ISS (NASA)

As the documentary makes clear, being in space, looking down on the planet while orbiting the earth, tends to have a profound impact on those who have the opportunity. We’ve written before about this “overview effect” on Big Think. It’s the sense that the people of Earth are traveling, as one, together on what Whitson (among others) thinks of as an extraordinarily beautiful “Spaceship Earth.” National boundaries and cultural, religious, racial, and other divisions just can’t be seen from up there, and leave one suspecting they ultimately don’t really count for much. We’re all in this together.

When asked her favorite places to view from above, Whitson answers, “Oh my gosh, there are so many,” before mentioning the “countless numbers of the color blue” in the Caribbean, Australia’s dark reds in which you can see streaks of fires, and the Great Barrier Reef. “New Zealand looks gorgeously green,” she adds. “Patagonia, when it’s not a cloudy day you can see the glaciers,” and, “I actually love flying over Northern Africa, over the Sahara, because the peach-colored sands, when they were bright enough, would reflect a peach-colored light into the station.”

Whitson describes her first impression of Earth’s atmosphere from above: “Oh, my gosh, it’s scary thin. I think that was what struck me the most on my first flight, how thin the atmosphere was compared to the size of the planet.” She adds, “And it gives you a real appreciation when we’re trying to build an ecosystem that we can live in in low Earth orbit, and you’re looking back at this planet and it’s doing it all by itself, providing all these things to us to allow us to live. and it gives you a real appreciation…for how special that environment is, and how fragile it looks, and maybe we ought to take care of it.”

Equally stunning is the contrast when astronauts look out the other way, says Whitson. “When you look out to the stars and see how many stars there are, it’s amazing. And then you realize, ‘Hey, this is just one galaxy, and there’s billions [sha draws out the word for Sagan-ian effect] of galaxies,’ and it gives you this other perspective of how small we are.”

When we asked Whitson if she feels we should continue looking for life elsewhere, she answers in the affirmative, saying, “I think in order to better understand where we come from and where we’re heading, I think we need to understand life and its origins throughout the galaxy. I think it’s going to take us time to find it,” the biochemist adds, “and it’s not necessarily going to look the same as us or be based on the same principles, but I’m just sure, based on sheer numbers, it’ll be there.” She predicts our first encounters are likely to be with microscopic life forms. When Big Think suggests tardigrades, she doesn’t object.

“I really do feel like the legacy of the International Space Station will be that we can do complex things together as a world,” Whitson says. As far as people working together across national boundaries, she says, “That doesn’t mean I think it’s easy, but it’s definitely worth the effort.” One of the reasons she hasn’t given up hope that we can reverse climate change is that we’ve done it, albeit on a limited scale, before when we addressed the ozone layer globally. “I do think it’s possible to do, and we have to not ignore the data and start figuring out what we can do.”