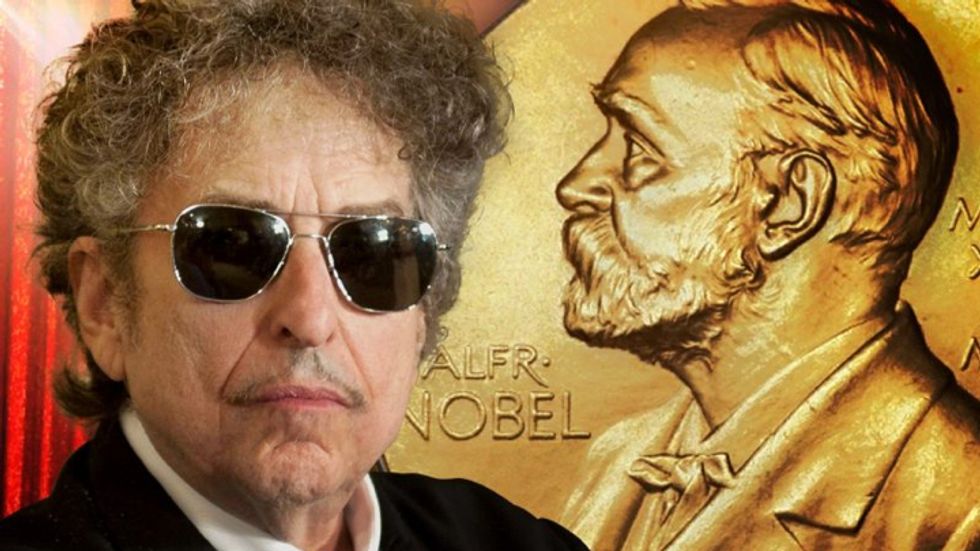 When Bob Dylan was awarded the Nobel prize in Literature in October 2016, many applauded while others shrugged, not least among them Dylan himself: It took him over two weeks to even accept the prize. When asked about it by a reporter for the British newspaper The Telegraph, his response was a nonplussed “Isn’t that something?” The songwriter promised to try and attend the Nobel ceremony in December of 2016 if it was at all possible. Apparently it wasn’t , and it turns out there’s a time limit for submitting an acceptance speech picking up up one’s Nobel and the $900,000 award: Six months. So Dylan still had a few days left when he finally submitted his recorded acceptance speech to the Nobel committee on June 4, 2017 and claimed his award. His speech, or lecture, made it clear to any doubters — and apparently to himself — just why he was awarded the Literature prize.

Dylan began with acknowledgements of the performers who first drew his attention to music — Buddy Holly and Leadbelly among them — and to folk music. Back then, folk music wasn’t a popular genre so much as it was an all-encompassing back-catalog of story-songs from pretty much everywhere, and from pretty much any era. Eventually, says Dylan in his lecture, “I had all the vernacular down. I knew the rhetoric. None of it went over my head – the devices, the techniques, the secrets, the mysteries – and I knew all the deserted roads that it traveled on, too. I could make it all connect and move with the current of the day. When I started writing my own songs, the folk lingo was the only vocabulary that I knew, and I used it.”

The fact is, the young Minnesotan had been collecting stories like these for some time. “I had principles and sensibilities and an informed view of the world. And I had had that for a while. Learned it all in grammar school.”

In his Nobel lecture, Dylan cited three classics, and, really, it’s not hard to see how they’ve had a hand at forming him. After all, he tipped his hat to Melville’s quixotic Captain Ahab (“Captain Arab”) in “Bob Dylan’s 115th Dream.” And the dark hand of politics and war so prevalent in his early work figure prominently in All Quiet on the Western Front. The world’s oldest lyric, The Odyssey, tells of life dangers and our human foolishness as we just try to make it home, so to speak, a common theme running through Dylan songs.

Here are some choice quotes from the lecture about these three great works of literature.

Everything is mixed in. All the myths: the Judeo Christian bible, Hindu myths, British legends, Saint George, Perseus, Hercules – they're all whalers.

We see only the surface of things. We can interpret what lies below any way we see fit. Crewmen walk around on deck listening for mermaids, and sharks and vultures follow the ship. Reading skulls and faces like you read a book. Here's a face. I'll put it in front of you. Read it if you can.

All Quiet on the Western Front by Erich Maria Remarque

All Quiet on the Western Front is a horror story. This is a book where you lose your childhood, your faith in a meaningful world, and your concern for individuals. You're stuck in a nightmare. Sucked up into a mysterious whirlpool of death and pain. You're defending yourself from elimination. You're being wiped off the face of the map. Once upon a time you were an innocent youth with big dreams about being a concert pianist. Once you loved life and the world, and now you're shooting it to pieces.

You killed a man yesterday, and you spoke to his corpse. You told him after this is over, you'll spend the rest of your life looking after his family. Who's profiting here? The leaders and the generals gain fame, and many others profit financially.

You've come to despise that older generation that sent you out into this madness, into this torture chamber. All around you, your comrades are dying. Dying from abdominal wounds, double amputations, shattered hipbones, and you think, "I'm only twenty years old, but I'm capable of killing anybody. Even my father if he came at me."

The Odyssey by Homer

He's always being warned of things to come. Touching things he's told not to. There's two roads to take, and they're both bad. Both hazardous. On one you could drown and on the other you could starve.

In a lot of ways, some of these same things have happened to you. You too have had drugs dropped into your wine. You too have shared a bed with the wrong woman. You too have been spellbound by magical voices, sweet voices with strange melodies. You too have come so far and have been so far blown back. And you've had close calls as well. You have angered people you should not have. And you too have rambled this country all around. And you've also felt that ill wind, the one that blows you no good. And that's still not all of it.

He'll disguise himself as a filthy beggar, and a lowly servant kicks him down the steps with arrogance and stupidity. The servant's arrogance revolts him, but he controls his anger. He's one against a hundred, but they'll all fall, even the strongest. He was nobody. And when it's all said and done, when he's home at last, he sits with his wife, and he tells her the stories.

Here’s the recording of Dylan’s lecture. No one tells a story like this man.