Does It Matter Who Wins in November? 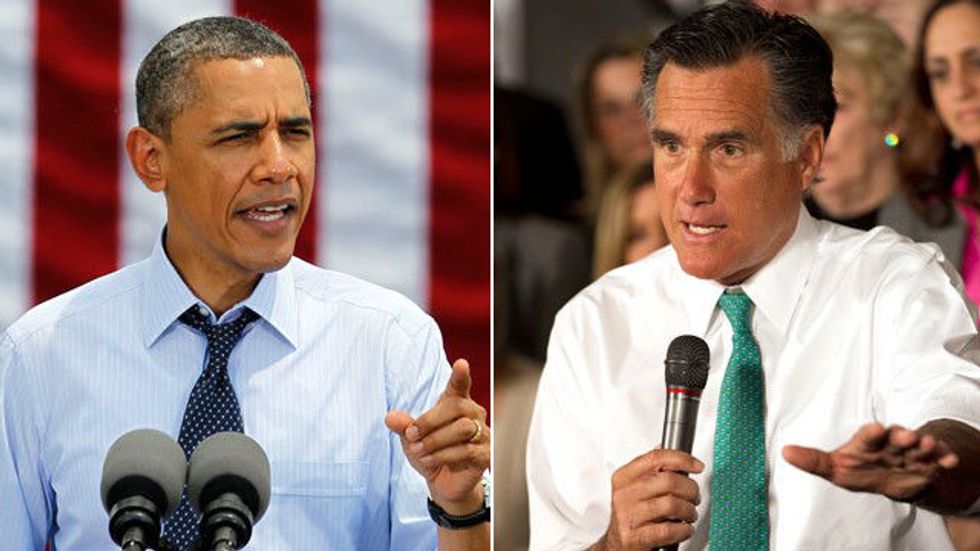 Arguments on both sides of this question were aired at a thought-provoking colloquium sponsored by the Hannah Arendt Center at Bard College on September 21-22: “Does the President Matter? A Conference on the American Age of Disrepair.” Video recordings of the proceedings are available here.

Let’s begin with three reasons to be skeptical about the importance of the election’s outcome.

1. Mitt Romney and President Obama are uncannily similar in a host of ways.

Ordinarily it is only people on the far right or far left for whom candidates closer to the center appear to be identical. But consider: both Romney and Obama are politically pragmatic Harvard grads who haven’t served in the military. And they aren’t that far apart on many issues. This may come as a surprise to anyone who watched the party conventions, where speakers drew bright, clear lines between their side and the Other, but there is an impressive number of issues on which the two men converge. There is also reason to believe that candidate Romney’s rhetoric against Obamacare and in favor of radical Medicare reform will soften once in office — for both ideological and structural reasons.

2. Structural constraints on the presidency radically limit the ability of chief executives to act in the domestic arena.

The founders sought to instill “energy" in the executive branch, but they were careful to establish limits on a president’s power as well. In Federalist 51, James Madison made the case for the separation and limitation of federal power:

Ambition must be made to counteract ambition. The interest of the man must be connected with the constitutional rights of the place....In framing a government which is to be administered by men over men, the great difficulty lies in this: you must first enable the government to control the governed; and in the next place oblige it to control itself. A dependence on the people is, no doubt, the primary control on the government; but experience has taught mankind the necessity of auxiliary precautions.

The Founders thought checks and balances were essential, but a frozen, dysfunctional government was not what they had in mind. They would be surprised by the level of acrimony defining the relationship between the legislative and executive branches today, and by the intransigence Congress displays in considering  a president’s agenda. They’d be stunned by procedural rules the Senate has adopted for itself — provisions nowhere to be found in the Constitution — which make it impossible to get legislation passed by a simple majority vote. Here is Jon Stewart’s incredulity in the face of 58 senators’ inability to pass a jobs bill for veterans last week:

Things are only getting worse, as Daniel Drezner wrote in the New York Times on Friday:

Congress has become increasingly sclerotic. During the 1950s, for example, Congress passed an average of 800 laws per session; in the post-cold-war era, that figure has declined to fewer than 400. Based on the 112th Congress, that figure will continue to decline in the future.

The party not in the White House has been increasingly obstructionist — and if you doubt this, look up the filibuster statistics. Any president trying to accomplish something with Congressional approval either needs a majority of the House and 60 votes in the Senate, or needs to compromise with an opposition party ever further away on the ideological spectrum. Short of a landslide, presidents have a brief honeymoon period in which to push major domestic policy initiatives through Congress.

3. Presidential campaigns do not attract candidates with true leadership skills.

Eric Liu, a domestic policy advisor under Bill Clinton, noted at the conference that presidents are “trailing indicators” rather than “leading indicators” of social mores. And Roger Berkowitz, director of the Center, notes that recent presidents have not been effective leaders:

The last two presidents who successfully amassed large majorities to pass transformative legislation were Lyndon Johnson and Ronald Reagan. What unites Johnson and Reagan — different in temperament and politics — was an uncanny quality of leadership. They were able to bring opposing sides together to accomplish grand and important visions. It is just such political leadership that we desperately need and clearly lack today.

Politics, Hannah Arendt argued, requires courage. It demands a risky and rare willingness to experiment and seek to bring about new directions in the world. To act politically demands doing things that are spontaneous and new; politics requires actions that are surprising and thus attract attention and generate interest, drawing people together around a common idea...

Leaders are those who take risks and are willing to fail. To look at Mitt Romney and President Obama is to see what happens when leaders are afraid to lose. We must now confront the fact that the need to raise money and the rise of consultants and the dominance of public relations has sapped politics of the spontaneity, thoughtfulness, and fun that can and should be at the center of political action.

I'm not sure thoughtfulness has evaporated as completely as Berkowitz argues, and the conventions did give the party faithful a chance for some spectacle and a tiny bit of spontaneity (witness Clint Eastwood's inane, unscripted performance). But Berkowitz is right that courage and risk-taking — and genuine creative thinking about solutions to national challenges — seem to be in short supply in recent election campaigns.

Given all this, does it matter who wins the election this fall? In my view, absolutely.

As hampered as presidents are in the domestic arena, they can still get some things done. The limited recovery from the economic crisis the stimulus produced may have been a lot more halting — or we may still be in recession — had John McCain had won the election in 2008. General Motors might be history. There would certainly be no Affordable Care Act providing health insurance coverage for millions of Americans.

And from a broader perspective, the identity of the president matters. For Leon Botstein, president of Bard, the shadow of race hangs heavily, if imperceptibly, over this election. If Obama were white, Botstein said on Friday, he’d be crushing Romney in the polls. Anne Norton, a political theorist at the University of Pennsylvania, argued that Barack Obama’s presidency was significant from a symbolic perspective. She notices less discomfort and more civility in her racially integrated Philadelphia neighborhood than there was before 2009. “The United States is still a nation of white supremacy,” she said, “but now it’s a nation of white supremacy with a black president.”

Expanding on this point, Eric Liu argued that a president matters crucially on a symbolic level. For Liu, the president “sets a frame of narrative for the rest of the country,” not only in terms of legislative proposals but on questions of national identity and the polity’s challenges and aspirations. Think of President Kennedy's goal of putting a man on the moon, President Reagan’s “it’s morning in America,” President Clinton’s pledge to “end welfare as we know it” or President Obama’s frank address on race & politics late in his first campaign. In the age of electronic media in which “all kinds of memes can spread instantly,” Liu said, “the president has an unparalleled ability to set off cascades of memes at will.” Even when he faces a hostile Congress or low approval ratings, the president “embodies our sense of unity,” appealing to the people’s “tribal need” to belong.

It matters a great deal who wins the election this fall, but no president has the capacity to heal our political disrepair all by himself.