With severe and potentially deadly weather continuing tonight in the central United States, an important reminder of what not to do from a post on last fall’s tornadoes in Oklahoma:

The people of Oklahoma City suffered their second violent bout of tornados in as many weeks on Friday evening. These storms weren’t nearly as devastating as the EF5 twisters that took dozens of lives on May 20, but a mother and her baby died when their car rolled over on the highway, and three other deaths have been reported.

As powerful as Friday night’s tornadoes were, the heart-breaking deaths and many of the injuries could have been avoided if Oklahoma City residents would have heeded this clear and distinct warningfrom the Centers for Disease Control:

The least desirable place to be during a tornado is in a motor vehicle. Cars, buses, and trucks are easily tossed by tornado winds.

DO NOT TRY TO OUTRUN A TORNADO IN YOUR CAR. If you see a tornado, stop your vehicle and get out. Do not get under your vehicle. Follow the directions for seeking shelter outdoors.

The same message is broadcast from countless sources. Here is one. Another is here:

If you’re outside in a car or in a mobile home, go immediately to the basement of a nearby sturdy building. Sturdy buildings are the safest place to be. Tornado winds can blow large objects, including cars, hundreds of feet away. Tornadoes can change direction quickly and can lift up a car or truck and toss it through the air. Never try to out-drive a tornado. Mobile homes are particularly vulnerable. A mobile home can overturn very easily even if precautions have been taken to tie down the unit.

Officials in Oklahoma pleaded with people to stay inside and off the roads.

They did not heed these warnings. Instead, they poured en masse onto the interstates, turning  I-40 and I-35 into parking lots and turning themselves into sitting ducks for this: 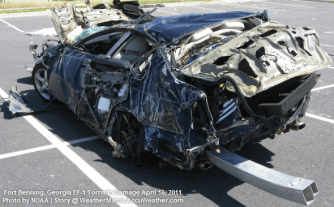 It is human instinct to run away from danger, and since cars reach speeds that exceed the speed of a tornado’s path, some version of human rationality might be thought to counsel packing up your kids and pets and high-tailing it out of town. But if the tornado is already in the area, this decision is deeply, tragically, absolutely irrational. And when everyone panics at once and snarls traffic, such that no one is moving, the danger is compounded exponentially. Even without a traffic jam, all evidence shows that during a tornado you are safest inside a building, preferably in a basement, and at greatest risk in a car.

During “Terrible Tuesday” in 1979, dozens of people in Texas and Oklahoma died when they put themselves in danger by trying to save themselves:

That twister, with wind speeds of more than 200 m.p.h., killed 43 people and left 59 seriously injured. Of those, 26 who died and 30 who were injured were trying to escape in automobiles, the CDC reported. Several of them fled houses that were left undamaged, according to a Red Cross survey.

Tonight our hearts go out to the people in Oklahoma who died and to those who were injured. Tomorrow our minds must turn to the warped decision calculus of thousands of Oklahomans that led to the lethal traffic jams and that could have killed hundreds or thousands. The frailty of human rationality is well known, but it was on particularly poignant display on Friday.

How to Be More Reasonable

In terms of the planets we’ve discovered, super-Earths are by far the most common. What does that mean for the Universe?
Up Next
Surprising Science

Proposed at this week’s D11 conference: A chip in the form of a daily pill that, when swallowed, turns a person’s body into an authentication token. Also offered: An electronic tattoo worn for a week at a time.