The modern history of women in government is surprisingly short. While women have held hereditary power in monarchies since ancient times, the list of elected or appointed heads of state goes back a mere 80 years.

While some female rulers before then may have been said to be elected, such as Mary II of England after the Glorious Revolution, such events are comparative flukes. In this list, we focus only on women who were elected or appointed as the head of state or government. Queens and Governors-General are therefore excluded. 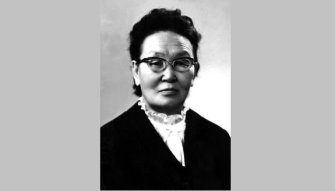 Khertek Anchimaa was the first woman to be elected as head of state of any country in the history of the world. She was the Chairwoman of the Tuvan People’s Republic from 1940 to 1944, when her country was annexed by the Soviet Union.

She rose to power using her education; she was one of the first people to learn the Tuvan alphabet when it was created and was given the task of teaching it to young members of the communist party. She was later sent to Moscow to further her education and returned to increased political opportunity as a result.

She was appointed Chairwoman just before the German invasion of the USSR. During the war, she oversaw the management of a wartime economy and the mobilization of an expeditionary force. She also worked behind the scenes to assure the Soviet annexation of Tuva. In 1944 this was achieved, and she continued to play a leading role in what were then local affairs 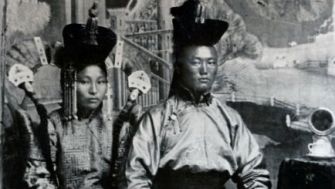 Another central Asian communist, Yanjmaa was a Mongolian woman who joined the party in honor of her late husband in 1923. She studied at the same university as Khertek Anchimaa at about the same time. She held many positions in communist Mongolia, including a seat on the politburo, the policymaking committee of the communist party.

After the death of the Chairman of The People’s Great Khural in 1953, she was appointed Acting Chairwoman for a transitory period lasting nearly a year. Regrettably, not much happened during her administration. 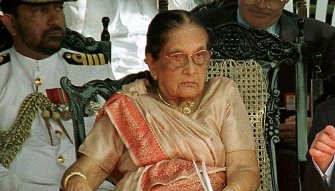 Sirima during her final term in 1998. She also had the dubious honor of being the oldest prime minister in the world. (Getty Images)

Sirima Bandaranaike was the first woman to be head of government in the modern age and was thrice the Prime Minister of Sri Lanka.

After the assassination of her husband in 1959 she was elected the leader of the political party she encouraged him to create and was elected to the Senate and then the Premiership shortly after. During her three terms, she defeated a coup attempt, nationalized large portions of the economy, renamed the country (it was Ceylon before 1972), and chaired the Non-Aligned Movement. Her daughter has served as Prime Minister and President of Sri Lanka as well.

She died in 2000 while returning home from voting. 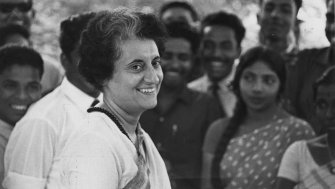 The third Prime Minister of India and the daughter of the first, Indira Gandhi was a mighty, if controversial, head of state. During her administration India defeated Pakistan decisively in Bangladesh’s war for independence, leading to Indian hegemony over South Asia. She oversaw the Green Revolution in Indian farming, allowing India to feed itself. She also finished her father’s plan to build an Indian atomic bomb.

In response to calls for revolution, she declared a state of emergency during which she ruled by decree and stifled civil liberties. This sparked a great deal of outrage, both domestic and international, and she was voted out of office as a result. She was reelected a few years later to her final term.

She was assassinated by her bodyguards in 1984 in response to operation Blue Star, the storming of a Sikh temple and destruction of a great deal of holy property. 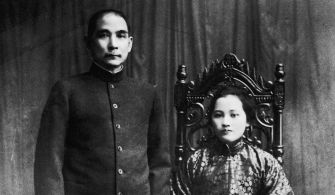 Perhaps the most curious rise to power on our list, Soong Ching-ling, also known by the name Madame Sun Yat-sen was the second wife of the Chinese revolutionary Dr. Sun Yat-sen and sister-in-law to KMT leader Chiang Kai-shek. During the Chinese civil war, she publicly broke with her family and declared herself for the communists.

In 1959 she was elected co-vice president of the People’s Republic of China. After the president was purged during the Cultural Revolution, she was the de-facto co-head of state until her fellow vice president was officially promoted four years later. During the chaos of the Cultural Revolution, she was placed on a list of people to be specifically protected against the red guards as she was considered both vital and a likely target.

From 1976-1978 she was the Chairwoman of the Standing Committee of the National People’s Congress, making her the official head of state. Shortly before her death in 1981 she was made the “Honorary President of the People’s Republic” making her technically in charge again. 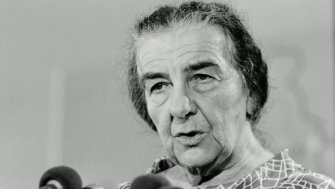 Meir gives a press conference during the Yom Kippur War. There were initial fears that a loss would lead to the destruction of Israel. (Getty Images)

The fourth Prime Minister of Israel, Golda Meir was born in Ukraine and grew up in Milwaukee. She lived on a kibbutz for some time in the 1920s and was active in Israeli politics from the start. She was one of two women to sign Israel’s Declaration of Independence.

Her premiership occurred after her retirement from politics as she had been diagnosed with cancer. Security issues dominated her five years in office. She was in office during the Munich Massacre and launched Operation Wrath of God in retaliation. She was taken by surprise during the Yom Kippur War and resigned shortly after the war ended. She died four years later from lymphoma. 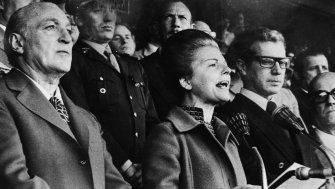 Peron speaks with her ministers close at hand. (Getty Images)

The first female to hold the title of president of any country in the world, Isabel Peron came to power after the death of her husband Juan Peron in 1974.

The third wife of the former Argentine president, she was elected to the vice presidency in a landslide victory that carried her husband to his third term. Due to his ill health, she was often acting president during his final months. She was sworn in as president before his death from a heart attack.

Her administration started out with high hopes, no doubt aided by memories of Evita and sympathy for a grieving widow. However, the perilous political and economic situation that had brought her husband to power proved too much for the democratic government and she was ousted in a coup after two years in office. This was after brutal attempts to stay in power were attempted, including a slew of killings that would set off the Dirty War.

She continues to live in exile in Spain, where she keeps a low profile. 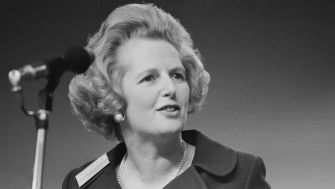 The first female prime minister of a country that had always done well with a woman in charge. Thatcher remains one of the more controversial prime ministers in British history, though one cannot doubt that she was influential.

After taking the position of leader of the Conservative party, she was elected prime minister in 1981. Her policies, known retrospectively as Thatcherism, undid the socialist policies of her predecessors. Vast swaths of the British economy were privatized and deregulated. Social welfare policies were greatly reduced.

Her three terms in office also saw the defeat of Argentina in the Falklands War, the establishment of the Anglo-Irish Inter-Governmental Council, and the agreement to return Hong Kong to the People’s Republic of China.

Her politics remain controversial. The week after her death the song “Ding Dong! The Witch is Dead” from The Wizard of Oz was the number two song on the British Charts. You can also watch her recite Monty Python lines here. 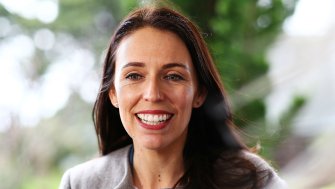 The current Prime Minister of New Zealand, Jacinda Ardern is the youngest female head of state in the world, having come to power at the age of 37. She has not been in power long, less than a year at the time of writing, but she has already made a great many headlines.

She became the first prime minister to march in a gay pride parade and has helped to repair relations with Australia. She is also expecting her first child, the cause of a great bit of celebration. The ‘first man’ of New Zealand, Ardern’s husband Clarke Gayford, will be the baby’s primary caregiver. Ardern completes a spectacular lineup of women in power, as the Queen, Governor General, Prime Minister, and Chief Justice of New Zealand are all women. 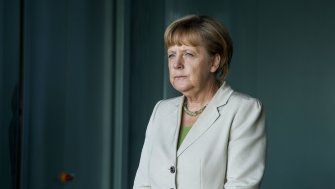 The current Chancellor of Germany, Angela Merkel has been in power for 13 years now. Raised in East Germany, she is the first former East German to hold the post.

Educated as a scientist, she holds a doctorate in physics. She took up politics after the fall of the Berlin Wall and has been in some kind of office ever since. Her time in office has been increasingly tumultuous, and she has steered Germany and Europe at large through the Eurozone crisis and the influx of Syrian refugees.

She is considered by many to be the “Leader of the free world” given the current political climate. This is in addition to being considered the head of the European Union and the most powerful woman in the world.

Related
The Present
Climate change is altering the chemistry of wine
Smoke taint from wildfires is gross, even to wine amateurs.
13.8
Could a hidden variable explain the weirdness of quantum physics?
We have searched and searched but have never found one.
The Past
The Wild West was lawless and chaotic — and the police helped keep it that way
Lawmen and outlaws were often the same people.
Thinking
6 great philosophers and how they used their political power
Most philosophers merely contemplate the world, but what about the ones who actually tried to change it?
Neuropsych
Asthma drug brings back “lost” memories
In a study involving mice, scientists used two different techniques — one optogenetic and one pharmacologic — to recover “lost” memories.
Up Next
The Past
Massive search for this woman in photograph from 1971 turns up fascinating details
The Internet solves another mystery.