When this photo hit social media in an effort to identify one black woman among a sea of white men, a lot of theories arose as to who she was. While every male was identified in a caption, the original photo listed her as “Unidentified”. The photo surfaced thanks to artist and writer Candace Jean Andersen, who stumbled upon the mystery in her research for a picture book about the Marine Mammal Protection Act.

The woman in this photo was an attendee at a 1971 International Conference on Biology of Whales.

She is the only woman, & the only one captioned “not identified” in the article I found the photo in. All the men are named.

Can you help me know her? pic.twitter.com/MifZvdRXRr
— Candace Jean Andersen (@mycandacejean) March 9, 2018

The photo was taken at the 1971 International Conference on the Biology of Whales.

Margot Lee Shetterly, author of Hidden Figures: The American Dream and the Untold Story of the Black Women Mathematicians Who Helped Win the Space Race, even got involved.

Shetterly commented, “Here’s a working scientist, contributing alongside her colleagues, and she’s not even given the professional courtesy of having her name recorded at a scientific conference. The photo, with her brown face half obscured by the people around her, is a perfect metaphor for the larger issue of history’s failure to record the work of women scientists, particularly women scientists of color.” 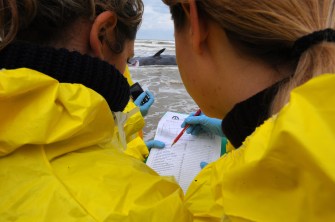 Eventually, the chase led to some folks who worked at the Smithsonian National Museum of Natural History at the time; because there were very few women—especially very few African American women—in the field back then, and because the Internet is what it is and loves a good mystery, the case was eventually solved.

The woman in the photograph is retired, belly-dancing, church-going, 71-year-old grandma and Biological Research Technician (and eventually, a biologist with a master’s degree) Sheila Minor Huff.

According to Candace Jean Anderson, originator of the first Tweet with the photograph, she didn’t disappear after that photo:

She participated in a two-island study of the mammals inhabiting the Poplar Islands in 1973–1974, and presented her findings at the 55th Annual American Society of Mammalogists Meeting in 1975.

This included her belief of natural extinctions of some species on the islands. pic.twitter.com/bV3aKVwWIP
— Candace Jean Andersen (@mycandacejean) March 15, 2018

Indeed, by the time Ms. Minor Huff retired at 58 she had become a GS-14 federal employee—one of the highest designations possible—at the Department of the Interior.

But she remains humble about the experience and the recent limelight. “It’s kind of like, no big deal. When I try to do good, when I try and add back to this wonderful earth that we have, when I try to protect it, does it matter that anybody knows my name?”

And here’s pioneering Marine Biologist and Oceanographer Sylvia Earle on what it was like to swim with singing whales:

Despite losing most of his extended family to the guillotine, Tocqueville grew up to become a fervent supporter of democratic revolution.
The Present

Admit it: you have no idea why a group of crows is called a murder. Here’s why.
Up Next
Starts With A Bang

Space Is Full Of Planets, And Most Of Them Don’t Even Have Stars

Rogue planets may be numerous in the galaxy, but it surprises most to learn that there are between 100 and 100,000 rogue planets for every star in our galaxy, putting […]