Facebook CEO Mark Zuckerberg underwent 10 hours of questioning this week from senators who inquired about topics like government regulation, the Cambridge Analytica scandal, and the company’s perceived monopoly power on social media.

The 33-year-old CEO ultimately apologized for not doing enough to protect user data.

“We didn’t take a broad enough view of our responsibility, and that was a big mistake,” he said. “And it was my mistake. And I’m sorry. I started Facebook, I run it, and I’m responsible for what happens here.”

At one point in the hearing, Zuckerberg spoke about the effect the recent PR nightmare has had on the size of Facebook’s user base.

“I don’t think there’s been any meaningful impact that we’ve observed,” he said.

But that might not be accurate, at least according to a survey issued by the research group Techpinions, which asked a representative sample of 1,000 Americans about their feelings toward Facebook. The results showed: 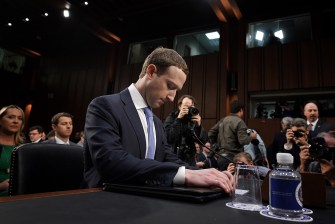 Zuckerberg at the Senate Judiciary and Commerce committee hearing on

Zuckerberg acknowledged that the barrage of negative press had hurt the social media giant.

“Look, it’s not good… It still speaks to people feeling like this was a massive breach of trust and that we have a lot of work to do to repair that.”

One solution that would, in theory, remove all privacy concerns is for Facebook to begin charging users money to have an account—that way Facebook wouldn’t have to rely on advertising to make money. But when Techpinions asked people if they’d be interested in such a paid model, 59 percent said no.

Facebook’s stock is down 15 percent since the Cambridge Analytica Scandal broke several weeks ago.

Related
Starts With A Bang
Ask Ethan: What are white holes, and do they really exist?
In General Relativity, white holes are just as mathematically plausible as black holes. Black holes are real; what about white holes?
Life
Strange life forms create an “alien” ecosystem in an abandoned uranium mine
Slimy biofilms made up of bacterial and eukaryotic life forms have taken over an abandoned, flooded uranium mine in Germany.
Hard Science
Earth has an eerie “sodium glow,” and astronomers use it to image stars
Air currents in our atmosphere limit the resolving power of giant telescopes, but computers and artificial stars can sharpen the blur.
Health
How saliva changes the flavor of food
“It’s a liquid, but it’s not just a liquid.”
High Culture
Why are flood myths so common in stories from ancient cultures around the world?
Could the prevalence of flood myths around the world tell us something about early human migration or even the way our brains work?
Up Next
Surprising Science
New coating kills germs on hospital surfaces with light
A new coating material has been developed for fighting healthcare-associated infections (HAI) using overhead lighting. It’s a new coating for hospital walls and surfaces that uses quantum dots and crystal violet to kill germs.