It’s well-known that a hospital stay can be as life-threatening as most medical conditions that might send you there. Healthcare-associated infections (HAI) are common, with about one hospitalized person out of every 25 having an HAI on any given day in the U.S. according to the CDC. Worldwide, the number’s one in 10. One bacteria that spreads through physical contact with objects or other people, Clostridium difficile, resulted in 29,000 U.S. fatalities in 2011. The longer one’s stay, the more likely it is that your life is in danger than when you check in. In 2011, 75,000 patients with HAIs died while hospitalized. Hospitals are working to make things better by being ever-more vigilant about hygiene, and recent statistics show improvement, but the emergence of infectious superbugs such as HA-MRSA adds an element of urgency to fighting the spread of bacteria. These organisms are hard, sometimes impossible, to treat. This month, a team of chemists at a Materials Research Society conference described a new light-activated material for walls and other hospital surfaces that contains bacteria-killing molecules that may keep superbugs from gaining traction. 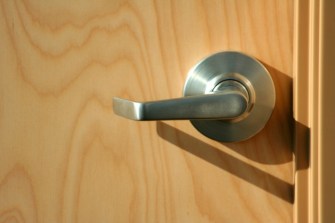 Other materials have been experimented with and are in use, such as polymer-based antimicrobial coatings that activate when sprayed with water. Copper and steel are also microbe-resistant but are rigid and hard to use on anything other than flat surfaces.

The new polymer-based coating, developed by a team of chemists led by University College London’s Ethel Koranteng, can be used as a flexible film that can encase a wide variety of shapes, including the door handles, computer keyboards and telephones on which bacteria are known to spread from person to person.

Even more interesting is that the material activates upon exposure to overhead lighting, making it ideal for use in hospitals. 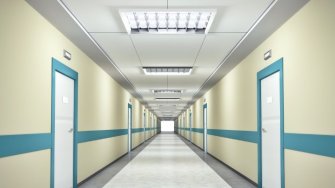 The material is a type of polyurethane in which are embedded “quantum dots,” tiny, cadmium-free semiconductor nanoparticles. It also contains crystal violet dye particles, so it’s referred to by Koranteng and her team as “QD-CV” material. The quantum dots absorb light and transfer its energy to the crystal violet, which then releases high-energy oxygen molecules into the air that destroy microbes.

The QD-CV material looks to be impressively effective, too, “resulting in complete kill of a laboratory strain of Staphylococcus aureus after 1 hour irradiation at 6000 lux light intensity and 99.99% reduction of a laboratory strain of Escherichia coli” according to the team that developed it. It also killed 99.7% of MRSA. The polymer also performed well against a multidrug-resistant strain of E. Coli, killing 99.85% of it.

These results are heartening. The new material could become an important element in fighting infections in any healthcare setting, such as the one in four nursing homes through which infections often run rampant. Along with the ongoing prioritization of hygienic practices, QD-CV coatings may mean that someday staying in a hospital will no longer be taking on an additional risk on top of whatever it was that made you check in in the first place.

Related
Starts With A Bang
The quantum reason why neutral atoms first formed
If it weren’t for the intricate rules of quantum physics, we wouldn’t have formed neutral atoms “only” ~380,000 years after the Big Bang.
Hard Science
Some earthquakes last for seconds, others for minutes — and a few for decades
What do you call it when the Earth shakes for three decades?
Sponsored
What childhood “money story” is shaping your financial behaviors?
Here are the signs that you inherited “money anxiety” from your parents.
The Present
The “maritime Indiana Jones” who salvages shipwrecks now wants to tow icebergs
Simple physics makes hauling vast ice chunks thousands of miles fiendishly difficult — but not impossible.
Neuropsych
Inside the brains of aging dogs
In a citizen science project, thousands of pet dogs are helping scientists to understand what happens to memory and cognition in old age.
Up Next
Technology & Innovation
The rise of Mark Zuckerberg explained in one amazing infographic
This detailed infographic shows the path of Mark Zuckerberg’s life.