The mayor of San Antonio, Ivy Taylor, made headlines recently during a mayoral candidate forum. She was asked about systemic generational poverty in her city and what she thought caused it. Mayor Taylor replied, “To me, it’s broken people…people not being in a relationship with their Creator.” Basically it was godlessness which caused poverty, in her view. Whether this was a deflection or her actual belief isn’t clear. But that she thought this would be an acceptable answer tells us something about how agnostics, atheists, and those questioning faith, are regarded in American society.

Another controversy in a similar vein, was when the Pope spoke out, saying it is better to be a good atheist than a “fake” Christian. This emphasizes Catholicism’s focus on good works as the path to salvation over pure faith, as Protestants believe. Christianity is the largest world religion, followed by Islam which is growing, but not as fast as the third place contestant, no religion, the fastest growing faith category in the world. Around 7% of the global population is atheist and if we include the non-religious, it’s 16.5%.

A recent Gallup Poll suggests one in 10 Americans don’t believe in God, a small but significant milestone. Over one-third of millennials polled were religiously unaffiliated. On another front, according to the Pew Research Center, the number of Americans who identify as Christian dropped 8% between 2007 and 2014. 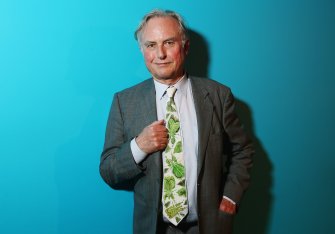 Oxford professor Richard Dawkins is well-known for his non-belief. On this side of the pond, two researchers say, there’s a stigma against atheism. Getty Images.

No religious affiliation or “nones,” are the second largest faith category in North America today. They’ve been growing steadily for decades now. About 25% of the entire US population are among the unaffiliated. While in the past several years, the number of atheists has doubled. Most are white, male, and highly educated. 56% are politically liberal. People of color, women, and the less educated tend to be more religious.

Some experts say there are even more atheists that aren’t accounted for. A recent study at the University of Kentucky finds a lot of what they call “closet atheists.” Researchers Will Gervais and Maxine Najle say there’s a lot of stigma surrounding atheism. Several polls have shown that people find atheists less trustworthy, even immoral. As a result, many lie to the pollster because they feel uncomfortable sharing their true feelings, Gervais and Najle say.

Pew’s 2014 Religious Landscape Study, found that those who self-identified as atheists mostly kept it to themselves. Two-thirds said they seldom, if ever, discussed their point of view. In the same survey, 51% of Americans said they’d be less likely to support an atheist candidate for president.

That number declined from 63% in 2007. Even so, there are no atheists in Congress today. Only one House member Kyrsten Sinema (D-Ariz.), is religiously unaffiliated. Perhaps even more thought provoking, a 2014 Boundaries in the American Mosaic Survey, found that 42% of US adults said that atheists don’t share the same vision for America as they do. 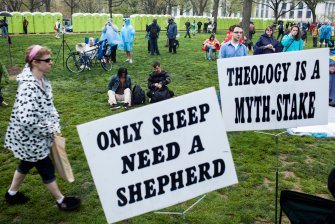 Despite the image of atheists being outspoken, a new study finds that there may be just as many “closeted” ones. Getty Images

According to Gervais and Najle, atheism in the US may be as high as 26%, more than double Pew’s findings. The results of this study are being published in the journal Social Psychological and Personality Science. Pew had it at nine percent. A 2016 Gallup poll say’s 10% of Americans are atheists. But Gervais said, “We can say with a 99 percent probability that it’s higher than [11 percent].”

He and Najle decided to use a unique method known as “the unmatched count technique,” to eliminate any stigmatization from the study. They created a survey and gave it to 2,000 US adults. These were two nationally representative samples. Rather than come right out and ask the respondent their beliefs, participants were given a list of statements. These included, “I have a dishwasher in my kitchen,” “I am a vegetarian,” “I enjoy modern art,” and “I own a dog.” One group however confronted an additional statement, “I believe in God.”

Each participant wrote down the number of statements that were true for them. Since both groups had around the same number of dog owners and vegetarians, the researchers could estimate how many didn’t believe in God. In this way, by taking off the social pressure, they arrived at a more accurate number, Gervais and Najle argue.

On the other hand, the director of Pew’s religion polling efforts Greg Smith, was skeptical of the findings. “I would be very reluctant to conclude that phone surveys like ours are underestimating the share the public who are atheists to that kind of magnitude,” he said. 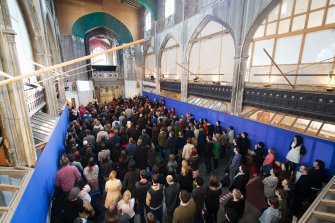 A lack of faith has been hard to study. Besides the stigma, the variety of labels and categories has expanded over time. They sometimes identify as agnostic, a skeptic, undecided, non-affiliated, or even a humanist—those who are “good without God.” Then there is a segment who simply refuse to be labeled. This wide differentiation may obfuscate “nones” actual numbers.

Another issue that might make them less visible is that there is no traditional, overarching institution to organize, cater to, and represent atheists. The Center for Inquiry and the Richard Dawkins Foundation may be changing that. Stephanie Guttormson is the operations manager for the latter. She told National Geographic, “Organizing atheists is like herding cats.” But she added, “Lots of cats have found their way into the ‘meowry.’”

There are websites, agnostic and atheist discussion boards, and Meetups for those who are on the skeptical side of things. There’s even a place for those who would like to continue taking part in some kind of ritual, without receiving dogma. In England, the Secular Sunday Assembly—something of an “atheist church,” has caught on. The idea has taken by storm, and similar institutions now dot North America.

To hear about this growing “atheist church” movement, click here:

Uncertainty is inherent to our Universe.
Up Next
Hard Science

Scientists create a superfluid with negative mass that accelerates backwards.