Scientists at Washington State University created a fluid with the previously-theorized (and rather counterintuitive) property of negative mass.

This is the first time a negative mass has ever been observed under laboratory conditions and can lead to advancements in our understanding of such hard-to-study topics as black holes, dark matter and neutron stars.

What’s unusual about the created fluid is that when you push on it, it doesn’t accelerate in the direction where it was pushed, as you would expect. Instead, it accelerates back, towards you. Scientists have previously hypothesized matter could have negative mass the way a particle can have a negative charge. But they have not been able to show it definitively until this study.

“What’s a first here is the exquisite control we have over the nature of this negative mass, without any other complications,” said Michael Forbes, professor of physics and astronomy at WSU and the study’s co-author. 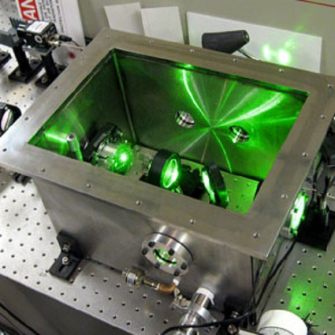 Forbes and the team led by WSU professor Peter Engels used lasers create the conditions for observing negative mass. First, they cooled rubidium atoms to nearly absolute zero. In the resulting state, known as a Bose-Einstein condensate, particles move super slowly, behaving like waves according to the principles of quantum mechanics. What also happens is that particles form what’s called a “superfluid”, moving in unison without loss of energy.

The scientists then used lasers to change the spin of the atoms in the fluid, making them behave like they had negative mass.

“Once you push, it accelerates backwards,” said Forbes. “It looks like the rubidium hits an invisible wall.”

Some scientists have pointed out that what’s created here is “negative effective mass,” with Sabine Hossenfelder of the Frankfurt Institute for Advanced Studies explaining the difference this way:

“Physicists use the preamble ‘effective’ to indicate something that is not fundamental but emergent, and the exact definition of such a term is often a matter of convention. The ‘effective radius’ of a galaxy, for example, is not its radius. The ‘effective nuclear charge’ is not the charge of the nucleus. And the ‘effective negative mass’ – you guessed it – is not a negative mass. The effective mass is merely a handy mathematical quantity to describe the condensate’s behavior,” Hossenfeldersaid on her blog.

Regardless of the wording, researchers agree that this is a significant advancement in experiments involving supercooling atoms and pave the way for studying complex cosmic phenomena.

You can read the study here, in the journal Physical Review Letters.

One Beer an Hour Is Our Rule of Thumb for Drinking. It is Dead Wrong.

Our "one beer an hour" rule of thumb is based on drinking a bottle of Bud. Now that more people are drinking pints of stronger craft brews, how do we adjust this rule of thumb?