It’s clear that the U.S. White House and Republican-controlled Congress and Senate see nothing but good in the idea of lowering taxes on the wealthy, whether that’s through straight-out tax legislation or by cloaking it in healthcare “reform.” Their publicly stated belief is that by allowing the wealthy to keep more of their money, jobs will somehow be created. That the historical record contradicts this seems not to concern them, suggesting that maybe they just believe the rich deserve to get richer. After all, since the Reagan “supply-side” tax cuts of the 1980, good new American jobs haven’t materialized Instead, the distribution of wealth in the U.S has shifted American money profoundly into the hands of the already rich. Last week, the International Monetary Fund released a report whose statistics practically beg the Trump administration and Congress — as well as other governments of developed nations with income imbalances — not to enact any more tax cuts for the wealthy, but suggested it would be better for everyone if this segment of the population were actually taxed more, saying, “While some inequality is inevitable in a market-based economic system, excessive inequality can erode social cohesion, lead to political polarization, and ultimately lower economic growth.”

It’s not that the IMF seeks a more equal distribution of wealth just because it’s fair. It’s that copious amounts of data show that extreme levels of inequality ultimately hold an economy back, with the purchasing capacity of the populace so constrained as to keep growth slow if extant all. The IMF sees inequality going down on average around the world — in fact, it’s declined by half overall thanks in part to emerging markets like China and India — though this improvement is uneven, and in some countries, like the U.S., inequality is becoming more extreme. 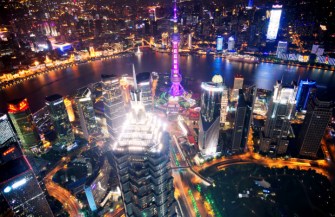 In the nations seeing a balancing-out of wealth, the IMF finds, “growth has ensured that increases in inequality are compatible with improving living standards for households across all deciles of the income distribution, although there are significant differences across countries regarding the extent to which growth has been inclusive.” Still, “This diversity of experiences and empirical analysis suggest that there is no systematic adverse trade-off [our italics] between increasing growth and decreasing inequality.”

In countries with “excessive” disparities in wealth, the IMF expects that, on the contrary, that “Excessive levels of inequality can erode social cohesion, lead to political polarization, and ultimately lower economic growth.” All of this seems to be happening in the U.S. There’s also the concern voiced by many that when so much money is in so few hands, democracy itself is jeopardized, leaving a country whose government serves primarily the wealthy. And the ramifications go beyond such abstract problems: The IMF report is packed with data showing how it leads to differences in health and longevity between the wealthy and everyone else. 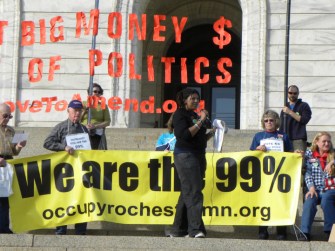 The IMF report is 130 pages packed with data supporting the wisdom of seeking economic balance, and doing so now to take advantage of a period when the world’s economies are growing — unevenly, but growing. Several methods for achieving stronger economies are studied, including raising taxes on the wealthy in countries with problematic imbalances, and on the benefits and drawbacks of guaranteeing a nation’s citizens a universal basic income (UBI).

In Washington D.C., Republican orthodoxy holds that taxing “jobs creators” kills jobs and hurts the economy, though the IMF’s scientifically derived statistics do not remotely support this concern. The data makes it overwhelmingly clear that the greatest obstacle to a robust economy isn’t high taxes on the rich, but income inequality. Though the GOP has proven willing to ignore science when it comes to climate change and other issues, let’s hope they listen this time before making our unequal, fragile American economy even worse.

Related
Starts With A Bang
NASA’s Habitable Worlds Observatory to finally answer the epic question: “Are we alone?”
NASA has finally chosen which flagship mission, like Hubble and JWST, will launch in ~2040. Detecting alien life is now a reachable goal.
Health
The scientific highs and lows of cannibinoids
Hundreds of these cannabis-related chemicals now exist, both natural and synthetic, inspiring researchers in search of medical breakthroughs.
Strange Maps
The horrors of World War II air war, in one stark map
This graph shows how badly German cities were hit by Allied bombing raids.
Hard Science
Subatomic ghosts shed new light on the structure of protons
A Fermilab study confirms decades-old measurements regarding the size and structure of protons.
The Present
The Taoist philosophy behind Alibaba, China’s e-commerce giant
Alibaba has played a key role in China’s meteoric economic rise.
Up Next
Personal Growth
You Love Science, But You’re Not a Scientist. You Could Be.
It’s never too late to consider switching to a career in science.