From the campaign trail to the presidency, President Donald Trump has stated time and again that his administration’s goal is to put America first. “The first duty of our government is to serve its citizens, many of whom have been forgotten,” the president said on the subject of national security. “But they are not forgotten anymore. With every decision and every action, we are now putting America first.”

To keep that promise, President Trump announced tariffs on several imports this year under the justification of national security. In January, the administration imposed tariffs on solar panels and washing machines. Then in March, Trump said he would foist heavy tariffs on steel and aluminum. American allies Canada, Mexico, and the EU were originally exempt, but on May 31, they too found themselves subject to the policy.

President Trump’s stated goal for these actions is to protect American industries, which he believes have been unfairly treated by bad deals on the global market. “When a country (USA) is losing many billions of dollars on trade with virtually every country it does business with, trade wars are good, and easy to win,” the President tweeted. 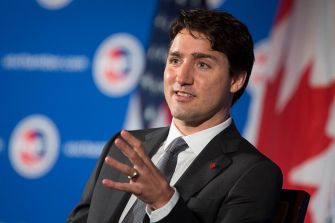 “Let me be clear: These tariffs are totally unacceptable,” Trudeau said. (Photo by Drew Angerer/Getty Images)

And as Canadian president Justin Trudeau told NBC’s Meet the Press, “The idea that we are somehow a national security threat to the United States is, quite frankly, insulting and unacceptable,” noting that the American-Canadian alliance is one of the most successful in the modern world.

Who’s right? Do trade wars put America first or do they push the U.S. further back? History suggests the answer is the latter.

At the start of the Great Depression, politicians were naturally in a protectionist mood, and Congress, led by Senator Reed Smoot and Representative Willis Hawley, spearheaded an effort to raise retaliatory tariffs that would protect American businesses from foreign markets.

Despite a petition signed by more than a thousand U.S. economists and countless critical editorials, President Hoover signed the Tariff Act of 1930 (commonly known as the Smoot-Willies Tariff) into law on March 3 of that year. The act increased American import duties on hundreds of goods with the costliest rates since the protective Tariff of Abominations (1828).

The results were as expected—if you were one of the petitioning economists. The United States saw a precipitous reduction in exports and imports, as other countries instituted retaliatory tariffs. Worldwide trade plunged from $4.9 billion in January 1930 to $1.8 billion by January 1933.

According to The Economist, the act “poison[ed] the emptying well of global trade” and stained foreign relations for years:

Smoot-Hawley did most harm by souring trade relations with other countries. The League of Nations, of which America was not a member, had talked of a ‘tariff truce’; the Tariff Act helped to undermine that idea. By September 1929 the Hoover administration had already noted protests from 23 trading partners at the prospect of higher tariffs. But the threat of retaliation was ignored: America’s tariffs were America’s Business.

Sound familiar? The idea that tariffs are good for American businesses and that retaliation is a nonissue match up perfectly with Trump’s rhetoric on his contemporary policy.

However, it is not difficult to see how the economic isolationism that propelled the Tariff Act of 1930 would also take root alongside the era’s political isolationism and collective narcissism, ideologies that harmed America and led it to exit the world stage when it was needed most.

In contrast, the second half of the 20th century shows the value trade brings for all parties. In The Better Angels of Our Nature, Steven Pinker dedicates a chapter to what he terms “the Long Peace.” Starting in the decades after World War II, this period saw a steep decline in wars fought between states. Between developed states, the practice is almost extinct.*

Again, history does not exist in a straight line, and Pinker argues that there are many reasons for the Long Peace, from the proliferation of democracy to a widespread adoption of humanist ideals. But one of the reasons he provides is that globalization and freer international trade correlate with peace.

Citing the work of Bruce Russett, John R. Oneal, among others, Pinker shows that countries depending on trade are less likely to militarize or solve disputes with displays of military force.

“[These data invite] a more expansive version of the theory of gentle commerce,” Pinker writes in The Better Angels of Our Nature. “The pacifying effects of commerce in this broad sense appear to be even more robust than the pacifying effects of democracy. A democratic peace strongly kicks in only when both members of a pair of countries are democratic, but the effects of commerce are demonstrable when either member of the pair has a market economy [emphasis Pinker’s].”

In short, an openness to a global economy has a pacifying effect on countries and their citizens, as it moves financial and political incentives away from war and toward cooperation.

Trade pacifies countries because it changes the nature of international relationships—from a zero-sum mindset to nonzero-sum one.

A zero-sum mindset sees the international stage as one where one country’s losses are another country’s gains, and this mindset pushed much of the international relationships of the first half of the 20th century. Proponents for the Smoot-Willies Tariff believed the loss of foreign business would be a net gain for American companies. They were wrong. Proponents of nationalism saw the losses of one country as a means to expand the prestige and legacy of their home country. They were also wrong.

The second half of the 20th century shows us that trade can, and should, be nonzero-sum. As Adam Smith wrote in The Wealth of Nations: “If a foreign country can supply us with a commodity cheaper than we ourselves can make it, better buy it from them with some part of the produce of our own industry employed in a way in which we have some advantages.”

Of course, there will be times when communities will have to make concessions to the global market, and just because a country is open to a nonzero-sum mindset doesn’t mean there won’t be bad actors. However, an openness to international alliances and trade can help countries develop the treaties and agreements necessary to support those disenfranchised communities and punish the bad actors. 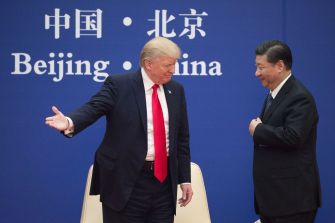 ‘No, you go first.’ US President Donald Trump (L) gestures next to China’s President Xi Jinping during a business leaders event at the Great Hall of the People in Beijing on November 9, 2017. (Photo by NICOLAS ASFOURI/AFP/Getty Images)

The reason why trade wars are bad, both for the economy and national security, is because they replace the advantages of international trade—that is, everybody wins to a degree—with all the disadvantages of a militaristic, winner-take-all outlook—that is, one country wins at the expense of others.

Unfortunately, President Trump’s view the world appears to be zero-sum. Underneath its populist sheen, “America first” is really “America alone.” And as history has shown us, the countries that don’t stand together, fall together.

*See Max Roser’s “War and Peace” entry at Our World in Data for more on the decline of war in the 20th century.

Even with all the recent impacts we've seen, it might be more "foe" than "friend" to us.
Up Next
Technology & Innovation

The future internet could be built of diamonds

Researchers at Princeton engineer a new type of diamond with silicon and boron that solves past issues with quantum data storage and retrieval.