“History, Stephen said, is a nightmare from which I am trying to awake.” – James Joyce, Ulysses

We are familiar with slavery and the genocide of the indigenous peoples of the Americas, two of the greatest horrors of world history. What we often don’t consider is what residue of that time is with us today. Recent studies show that trauma inside the brain can be passed down from one person to the next. This was observed in the offspring of those who suffered through the holocaust. But for how many generations is such trauma carried forth? And what effect does it have on the individual, their community, country, or corner of the world?

After the horrors of colonization, most nations were left to fend for themselves and plodded ahead as best they could, enduring widespread trauma and with little resources to modernize. Now, 22 Island nations that make up The Caribbean Community (CARICOM), are calling for reparations for slavery and the genocide the indigenous peoples.

The trade and political organization has assembled the Caribbean Reparation Commission. They in turn framed the Reparatory Justice Program—a 10-point plan which is being aimed at their former colonizers. The plan includes: an apology, reparations to help the descendants of slaves, aid for the remaining indigenous peoples, psychological rehabilitation, a plan to eradicate widespread illiteracy, technology transfer, robust health programs to help combat the “public health crisis” in the region, aid for building cultural institutions to frame what has happened, and a cancellation of debts.

Prime minister of Antigua and Barbuda, Baldwin Spencer has said that the Caribbean’s inability to acquire wealth and develop their societies is directly associated with these historical legacies. CARICOM has enlisted the help of UK-based lawyer Martyn Day. Day is famous for winning compensation for Kenyans tortured under British rule during the Mau-Mau uprising of the 1950’s. Although these European states admit to their slave-owning past, representatives say they do so in a general way. None have officially apologized, for fear of being dragged into court.

Reparations is a touchy subject in the Caribbean. Some see it as a matter of justice, while others say that it is a fruitless effort, consuming resources which could best be placed elsewhere. After all, Europe itself is going through rough financial and political times at the moment. Besides an economic slowdown and rampant unemployment in so many areas, there is a resurgence of conservative populism, an immigration crisis, and fear of a more aggressive Russia to their backs. More concerning still, few legal cases set precedent.

Meeting of CARICOM leaders in the UK.

3.1 million Africans were bought and sold by the British between 1662 and 1807, as part of the Transatlantic Slave Trade. That’s to say nothing of the multitudes taken by France, Spain, and Portugal into their colonies. In British ones as elsewhere, most of the slaves were sold to work on plantations. UK historians say that in Victorian times, somewhere around one-fifth to one-sixth of all British fortunes were in some way built upon slavery.

Revolts occurred periodically. These decimated the island nations’ economies. Though the slave trade was ended in Britain in 1807, slavery itself still existed until legislation ending the practice passed in 1834. Former slave holders were compensated to go along with emancipation. Yet, former slaves never saw reparations. Britain cut its Caribbean colonies loose in 1838, after a few short years of apprenticeship.

Even then, they hadn’t been completely liberated. An apartheid existed, instead. Those of African descent saw little representation in government, and indentured workers from India and China were introduced, limiting labor opportunities for the local populations. It wasn’t until early the 20th century when such abuses ended. The reparations CARICOM seeks today aren’t only for those who whose ancestors were enslaved, but the remaining native peoples as well. According to Barbadian historian Hilary Beckles, native Caribbean’s went from a population of around three million before Columbus to less than 30,000 today. 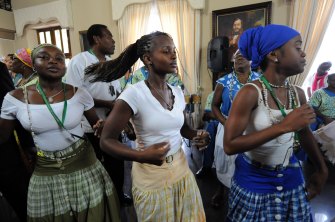 Garifuna dancers, some of the remaining descendants of the native Carib peoples.

Due to these considerations, many believe the countries who benefitted have a responsibility to set things right. The UK, France, and the Netherlands have been named in the reparations program thus far. Norway, Sweden, and Denmark may be added. 14 Caribbean nations so far today had formed separate national reparations commissions. CARICOM seems to be organizing them into one powerful voice. An International Reparations Summit was held in New York City for the first time in April of 2015. 205 advocates from 22 nations attended. Another summit was held in St. Lucia in 2016 and a further one is planned for Europe in 2017.

Though it hasn’t been formally charged, the UK’s Foreign Office is aware of the initiative. A representative told Reuters that, “Slavery was and is abhorrent. The United Kingdom unreservedly condemns slavery and is committed to eliminating it.” Even so, that representative denied the call for reparations saying, “Instead, we should concentrate on identifying ways forward with a focus on the shared global challenges that face our countries in the 21st century.” Some wealthy nations say they’ve already sent compensation through development aid.

The US and other countries have recently set up a reparations committee which CARICOM says is partly due to their efforts. What’s more, their model is being closely watched and is setting an example for other countries who were badly damaged by the slave trade, genocide, slavery itself, racial apartheid, and colonization. Recognizing this and their responsibility to their constituents, CARICOM representatives have vowed that if their pleas are ignored, they will take each individual case to the International Court of Justice in The Hague.

There Is No Such Thing As Soy Milk

Got Milk? If you are holding a carton of Soymilk you don’t. Right now there is a battle over what can be defined as milk, and what can’t be. With milk sales going down and plant-based beverage sales going up, it could be an all-out war.