How to use mindfulness to boost your standardized test performance

An expert's take on how to ace your exams through mindfulness.

Photo by Lacie Slezak on Unsplash

Mindfulness is one of the most powerful modes of thought we can harness. It's quite simple too. In short, it's a state of mind where we are conscious of the now and embrace our full range of experience in the present moment. That may be a rush of emotions and thoughts, or it could be the flow we find ourselves in when conducting a task.

The power of this simple state of mind cannot be understated. It's an untapped mental space that we're all privy to. While yogis and mystics have harnessed this practice for millennia, nowadays a great deal of people are also finding the benefits in applying mindfulness.

The application for this mode of thought is endless. That's why author, Logan Thompson, decided to start teaching his test prep students how to capitalize on it. He details this in his new book: Beyond the Content: Mindfulness as a Test Prep Advantage, where he explores his methods for banishing test anxiety, acing exams through awareness and accepting all order of emotions that arise in the flurry of everyday thought.

Big Think recently caught up with the author and got an inside look into the magic of mindfulness. 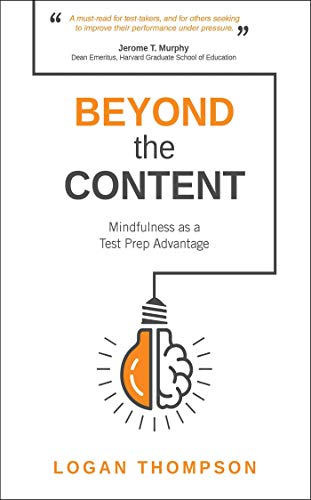 Thompson sets out the idea that the hardest part of taking a test stems from the stress, anxiety and self doubt we harbor. Academic instruction focuses on what he considers the other half of test prep, which is the standard content and strategy. That is, learning the material and applying it. Thompson doesn't believe that lack of proper studying or not comprehending the material is where the problem lies.

"Students keep talking about being a bad test taker. I really push back against that. I don't think that's true. What's most often happening is that students understandably have only been studying half of test prep, just the content and strategy part."

Thompson has created a metaphorical framework in the book where he explores how to tackle this other half of the test prep – the mindfulness and mental performance aspect.

Much of the problem stems from the stream of thoughts and emotions which are detracting students from performing their best on the test. Thompson labels these distracting feelings and thoughts as "passengers."

"We have thoughts that are frequent visitors and tell us we're not good enough, or if we fail this problem we'll fail the whole test. We all have passengers, like those in a car that are trying to take the wheel."

Thompson's solution is to unlock the "driver" of ourselves, or the parts of an individual's psyche that can bring about calmness, wisdom and intelligence. Passengers never go away. The goal isn't to get rid of them either, but to embrace the thought and put in its place for what it is.

Our minds are a cauldron of activity. When we start to practice something like mindfulness, sometimes conversely we can begin to get more anxious. We're realizing these negative thoughts are there and now we want to get rid of them. But the more we think and try, the more tangled it gets.

Thompson puts down the gas pedal on this metaphor through the whole book. When there is a synthesis of mindfulness and an interplay between our drivers and passengers, our mind gets us to where we need to be.

Methods of mindfulness for test prep Logan was first drawn to the concept when he was in his early twenties. Books like The Power of Now and Wherever you go there you are, radically changed his perspective on life. After spending years meditating and attending mindfulness retreats, he realized that this way of thinking could be imparted on students, especially those anxious test takers.

"When I first drew a contrast to the 'present moment' and the past and future moments; and became aware of that potential distinction – it was intellectually mind blowing."

On the subject of the receptiveness from the students to this method, he spoke about how quickly they took to it. There was no resistance or defensiveness to try.

Thompson often uses paradoxical observations to detach the students from the outcome of worrying about what's going to happen. By planning to not be worried and to be calm during a test, students are actually preparing themselves to be anxious.

What our bodies and minds do now tends to form habits on what they're going to do next.

"if I want to be relaxed, calm, focused in this next moment, then I have to surrender being worried about the next moment and practice being within the now. The best predictor of how we're going to be in the next moment is this moment."

Awareness is the first step towards realignment.

"[Lack of awareness]... is like someone being behind the wheel and not realizing they've gone beyond the path. First open your eyes and see where you are. Then you have the choice to either stay on that path or jump on the path you want to be on."

For teachers and parents that want to impart this onto their students and children, the best way to start is just to listen and open up a dialogue. Let students share with one another about the "passengers" that they hold in their minds and have them realize they're not alone.

They're not bad test takers. There's no reason to blame themselves. It's lack of awareness and the fact that they've never been taught the other half of the equation.

Once students get beyond the content, the state of mindfulness will bloom into so many other countless areas of life. And this goes for everyone, regardless of whether they're a student or not.

Pay attention to the mind, you might end up liking what you find