What Are the Smartest Animals on the Planet?

New research produces surprising results about which animals are the smartest. 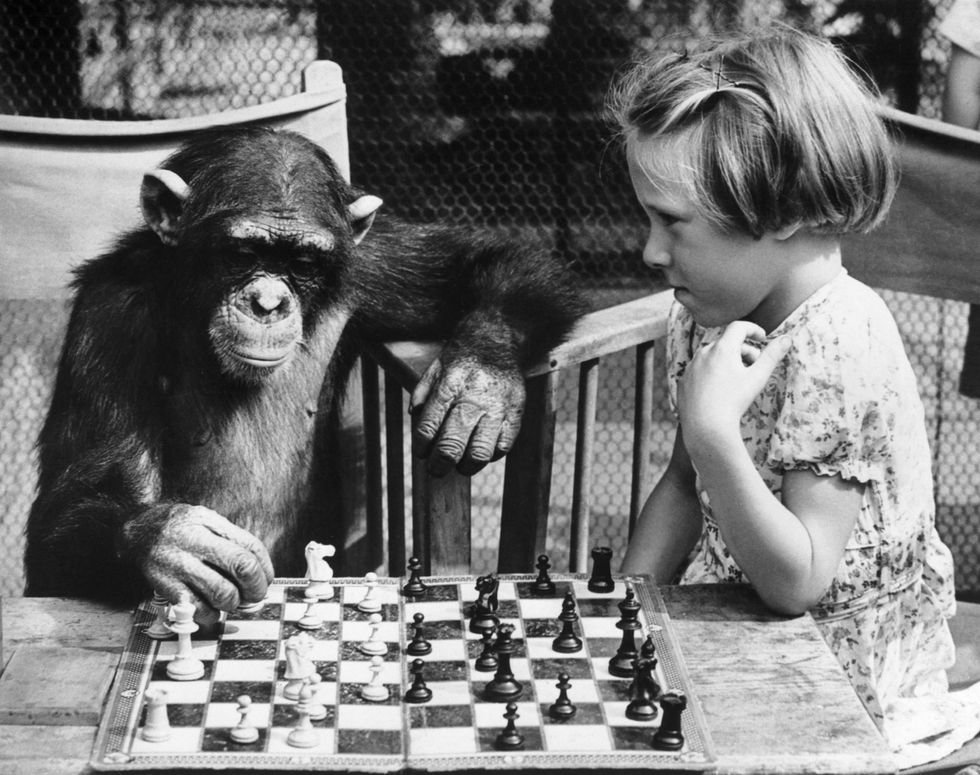 Humans aside, chimpanzees would have to be at the top of any consideration about relative intelligence of animals. They are most like us, sharing 99% of the same DNA, as we have have descended from the same ancestor species that lived 6-7 million years ago.

Chimps have a concept of self, are capable of symbolic thought, have a language, feel emotions, can utilize tools, like to socialize, and as we, humans, are making these subjective intelligence comparisions based on closeness to ourselves, certainly chimps would be our chosen brainiacs of the animal kingdom.

But a new study suggests that ravens are as smart as chimpanzees. How is it that small birds with presumably small brains can compete with much larger apes? It turns out that it's not the size of the brain that matters, but neuronal density and the structure of the brains.

"Absolute brain size is not the whole story. We found that corvid birds performed as well as great apes, despite having much smaller brains," said Can Kabadayi, doctoral student in Cognitive Science at Lund University in Sweden.

How did the researchers come to such a conclusion? They tested inhibitory control, which is basically the ability to override animal instincts to instead choose a more rational approach. A 2014 study by Duke University compared how 36 animals performed a challenge where they had to pull out food from a transparent tube which had openings on both sides. The less intelligent animals would try to get at the food directly, but the successful ones pulled it from the openings. Apes performed best on that test, but no birds were tested then.

This time around, scientists did the same test with ravens, jackdaws and New Caledonian crows. On every try, all of the ravens chose to enter the tube from the side openings. Crows and jackdaws did pretty well too, performing at the level of bonobos and gorillas.

Kabadai concluded: "There is still so much we need to understand and learn about the relationship between intelligence and brain size, as well as the structure of a bird's brain, but this study clearly shows that bird brains are not simply birdbrains after all!"

Are there other smart animals?

Dolphins are considered some of the smartest animals on Earth, with the ratio of their brain size relative to their average body size being second only to humans. Dolphins have been shown to recognize themselves in mirrors, to create language-like personalized whistles, solve problems and even follow recipes.

Watch this TED Talk from the neurobiologist Lori Marino for more dolphin facts:

Surprisingly, pigs have been shown to often outsmart dogs and close to the same intelligence level as chimps.

Apparently, pigs have excellent long-term memories, can comprehend and learn a symbolic language, and live in social communities where they learn from each other.

How do elephants fare? Surely, their sheer size has to count for something. Indeed, elephants have great memories and can remember friends and enemies for decades.

According to neuropsychiatrist Jon Lieff, "Elephant communication is elaborate involving many different vocalizations, and they 'speak' to family five miles away. Elephants are extremely collaborative, consoling and cooperative, and deeply mourn their dead."

One very curious case of an intelligent animal was a horse named Clever Hans. Horses are generally intelligent and can learn, but, overall, would not top this type of list. Clever Hans was different, however. Hans could do math! He could add, subtract, multiply, divide, do fractions, tell time, follow a calendar, differentiate musical tones, read, spell, and even understand German.

His handler could ask him "If the eighth day of the month comes on a Tuesday, what is the date of the following Friday?" And Hans would answer by tapping his hoof. Of course, it was proven that Hans was able to do all this by carefully observing the visual cues of his master rather than being actually intelligent. At least that's the "official" explanation.

What about dogs, you say? Their intelligence varies widely across breeds, but they can certainly learn new skills and exhibit emotional intelligence. But if you want a really smart pet, adopt a crow.