The 7 longest ruling dictators in the world

Here are 7 current dictators that have ruled their countries the longest. 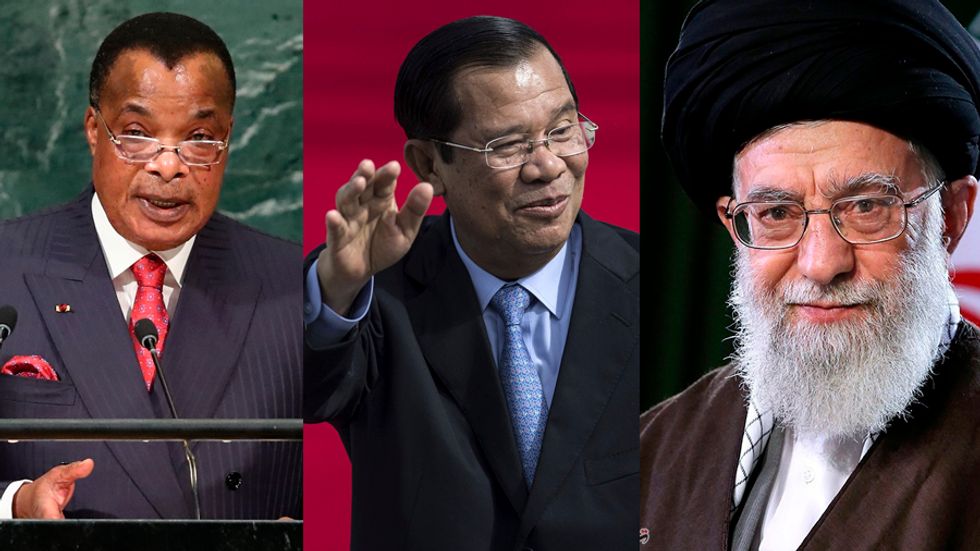 The 20th century has seen its share of dictators, rulers with absolute power, who ran their countries for decades while brutally oppressing any potential opposition. Cuba’s Fidel Castro, for one, was in power for 52 years, while North Korea’s Kim Il-sung (Kim Jong-un’s grandfather) led his people for 48 years.

While some such guys (yes, they are pretty much always guys) went away, our times still have quite a few dictators holding on to power individually or through the strength of their family's dynasty, like Kim Jong-un or Togo’s Faure Essozimna Gnassingbé Eyadéma. But which ones have been at it for the longest amount of time?

1. Paul Biya, President of Cameroon, has ruled for 42 years.

In a land rife with dictators, Paul Biya is now the longest-ruling dictator in Africa, controlling his country of Cameroon since 1975 when he became Prime Minister. Biya consolidated his power during a fake attempted coup in 1983-1984, which allowed him to eliminate his rivals. While he introduced some reforms to allow for multiparty politics, the elections organized under his leadership have been plagued with voting irregularities and fraud.

Obiang has been President of Equatorial Guinea since 1979, when he ousted his uncle from power in a military coup. He tolerates little opposition, with the Democratic Party of Equatorial Guinea, which he established, being the only party allowed. Obiang has wide-ranging powers thanks to his country’s constitution, allowing him to rule by decree.

Under his rule, abuses have included "unlawful killings by security forces; government-sanctioned kidnappings; systematic torture of prisoners and detainees by security forces; life-threatening conditions in prisons and detention facilities; impunity; arbitrary arrest, detention, and incommunicado detention,” according to the U.S. state department.

In 2003, the state-run radio declared Obiang "the country's god” with "all power over men and things." The radio also claimed Obiang was "in permanent contact with the Almighty" and "can decide to kill without anyone calling him to account and without going to hell." If that kind of job description doesn’t make you a dictator, nothing will.

3. Ali Khamenei, Supreme Leader of Iran, has ruled for 36 years.

While he was chosen as Iran’s President in 1981, Khamenei has been the country’s Supreme Leader since 1989. As Supreme Leader, he is both head of state and commander-in-chief of the armed forces. He can rule by decrees, making the final decisions on the government’s main policies regarding the economy, foreign relations, and national planning.

Under his rule, Iran has known numerous protests that have generally been violently put down, with participants like the students who took part in the 1999 protests disappearing in Iranian jails. He has also been accused of ordering assassinations.

The 2017 protests over the state of the Iranian economy featured demonstrators chanting “death to dictator” while taking down banners with Khamenei’s face.

4. Denis Sassou Nguesso, President of the Republic of Congo, has ruled for 33 years.

Sassou Nguesso has been running Congo since 1979. After controlling the country as the head of the single-party regime under the Congolese Party of Labour, he lost power for a 5-year period between 1992 and 1997. He led opposition rebel forces during the Second Civil War in the Congo from 1997 till 1999, when he re-assumed the leadership after ousting President Pascal Lissouba.

Nguesso was implicated in the disappearances of many Congolese refugees during the so-called “Brazzaville Beach affair”.

5. Hun Sen, Prime Minister of Cambodia, has ruled for 33 years.

Hun Sen has been the Prime Minister of Cambodia from 1985, which makes him the world’s longest-serving prime minister. Coming to power with the bloody Khmer Rouge, Sen has been accused of corruption, as well as using violence and intimidation to maintain his hold on power. Thousands of opposition politicians, activists and human rights workers have been murdered under his regime.

6. Yoweri Museveni, President of Uganda, has ruled for 32 years.

Leading Uganda since 1986, Museveni has been known to suppress political opposition and passed a constitutional amendment in 2005 to scrap presidential term limits. That allowed him to rule for life.

Museveni-headed National Resistance Army (NRA) has been accused of using child soldiers and extrajudicial executions, while his government has been attacking journalists, as per the 2013 World Report. He also backed the institution of the death penalty for homosexuality in 2009.

Becoming President in 1989 as a result of a military coup, which ousted a democratically-elected government, al-Bashir has been accused of major corruption during his tenure, looting the wealth of his country. US diplomatic cables showed that he is thought to have embezzled $9 billion of his country’s money and stashed it in London banks.

Al-Bashir has been indicted by the International Criminal Court (ICC) for overseeing a campaign of mass killing, pillaging and rape during the war in Darfur. The death toll there ranged between 200,000 and 400,000 people. The ICC has issued an arrest warrant against him for war crimes and crimes against humanity. The Sudanese government, of course, refuses to recognize that ICC has any jurisdiction over its affairs.