If you hate the over-commercialized schmaltzfest known as Valentine’s Day that seems designed to sell candy, postcards, and Garry Marshall movies, and you happen to be single right now, there’s a holiday you might enjoy much more – Singles Awareness Day. The somewhat humorous celebration with the acronym S.A.D. is meant as an anti-Valentine’s for people who are single.

The day can be celebrated on February 14th, at the same time as Valentine’s Day or you can, like some people, hold off till February 15h, and have that day all to your own single self.

What can you celebrate if you are not currently coupled? Love for your family or friends. Or the love you should have for yourself.

Especially considering its acronym, is S.A.D. some sort of super-ironic millennial anti-Valentine’s anti-holiday? One fact to consider is that about 45% of Americans over 18 are single – that’s about 110 million people,according to the U.S. Census. With such a high number of unattached people, it’s no wonder some would react against the rather pushy Valentine’s Day.

As an alert contemporary person, you certainly might suspect that Valentine’s Day is a particularly modern invention of corporations who look to exploit romance for profit. It might be interesting for you to know that, actually, Valentine’s Day has a pretty long history that goes all the way back to the Romans, who used to celebrate Lupercalia, a raunchy fertility festival, during mid-February. 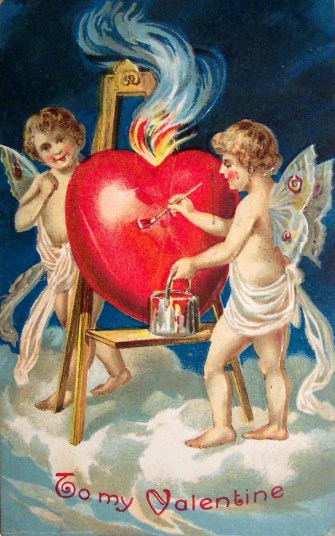 Aiming to Christianize the celebration, at the end of the 5th century, Pope Gelasius I chose February 14th as the day to honor the life of two Christian martyrs named Valentine, who were both killed by the Romans in prior centuries. One of the St. Valentines celebrated, Valentine of Rome, was imprisoned for marrying soldiers who were forbidden to marry – a fact that added an element of romance to the holiday.

Chaucer and Shakespeare continued to romanticize the holiday, which became popular in Britain and spread throughout Europe. Postcards related to the day were already popular in the Middle Ages, so you can feel less snarky about Hallmark ruining everything. They were by far not the first to do so. The holiday continued to spread around the world and acquire undeniable commercial elements until reaching the shape and scope it has today.

Check out the fuller historical story here, in this video from the History Channel:

If the historical weight of Valentine’s Day still doesn’t do anything for you, an unattached person, what can you do on Singles Day? One course of action would be to get together with other singles and celebrate your love of life together. If things go well, you might stop being single just by doing that. You can also give yourself a nice gift. Come on, you deserve it. You can even send yourself flowers.

You can also do some traveling, like going to Mardi Gras on February 13th to have yourself some fun that will carry over into Valentine’s Day.

And if you are in a romantic relationship, you can still celebrate Singles Awareness Day. Find a way to show appreciation to your single friends. No one should feel left out when it comes to love.

Of course, some people find Singles Awareness Day a bad idea, thinking it promotes thinking of singles as somehow pitiful and in need of support. You can certainly choose this path and not celebrate any such day at all. But do you really want fewer holidays?

For a musical accompaniment to this discussion, please check out this video by Joseph Vincent about Single Awareness Day:

Related
13.8
What kind of intelligence is artificial intelligence?
The initial goal of AI was to create machines that think like humans. But that is not what happened at all.
The Present
What’s effective altruism? A philosopher explains
Some effective altruists “earn to give” — they make as much money as they can and then donate most of it to charities.
Sponsored
How to avoid family fights about money
No family is immune to money conflicts, no matter how much they love each other. Here’s what to look out for.
L&D strategy
Best practices for a needs analysis [Templates included]
Conducting a thorough needs analysis requires care, curiosity, and open-mindedness.
Neuropsych
Memory and the benefits of forgetting
Forgetfulness isn’t always a “glitch” in our memories; it can be a tool to help us make sense of the present and plan for the future.
Up Next
Neuropsych
This awesome species of fish gets by on 2 hours of sleep
Researchers are looking into what this fratboy fish of the Mexican underwater cave systems can teach us about sleep regulation.