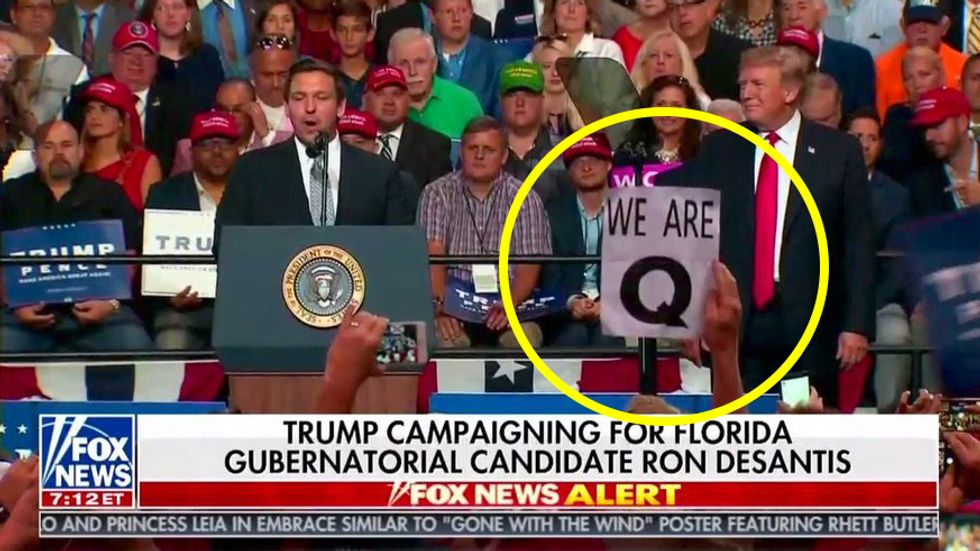 What is QAnon? The mainstream is finding out. (Credit: Fox News / @SalHernandez / Twitter)

President Trump is often at the nexus of conspiracy theories, some of his own making and some promoted by both his supporters and opponents. The latest such conspiracy suddenly materialized for the public during Trump’s rally in Tampa, Florida on July 31st when followers of a strange internet phenomenon known as QAnon made their presence known.

QAnon is a person or group on the Internet that attracted followers who deeply mistrust the media and regard facts where Donald Trump is wrong about something as proof of devious plots against him.

According to The Washington Post, a thread on the anonymous image-board 8chan (where QAnon “requests” are posted) described “Q” as “an anonymous user claiming to be a government agent with top security clearance, waging war against the so-called deep state in service to the 45th president.”

“Q" has apparently been posting on various Internet forums like 4chan and 8chan since October 2017. As recent events show, the influence of this figure has spread far and wide through social media.

During the Trump rally in Tampa’s Florida State Fairgrounds Expo Hall the followers of “Q” were quite visible, wearing t-shirts with “Q” on them as well as waving signs reading “We are Q”. In fact, t-shirts referencing “Q” have become frequent at Trump rallies.

"People lining up for the Trump rally in Tampa today. A lot of the chan anons might treat Q-Anon like a LARP, but by all appearances there are plenty of people who take it seriously irl." pic.twitter.com/uys7kmnAs1

In April, hundreds of QAnon adherents marched in downtown Washington, D.C., demanding “transparency” from the Justice Department. In June, an armed man in an armored truck he made himself shut down the highway near the Hoover Dam while complaining about Trump not locking up everyone he promised and referencing QAnon. The man now faces terrorism charges.

Liberal icons like Barack Obama, Hillary Clinton, and George Soros are seen as working on a coup to wrestle power away from the president while they traffic children. One of the most elaborate theories has Trump actually pretending to collude with the Russians just to have an excuse for the special counsel Robert Mueller to be hired. In fact, the theory goes on to claim, Mueller is actually a “white hat” hero who is working to expose the evil Democrats.

“Q” feeds the disciples called “anons” or “bakers” bits of intelligence, or “breadcrumbs,” that they put together into an understanding of the coming “storm,” which is when the president will finally vanquish the elites, globalists and the deep state. The term “storm” actually came to the community from Trump’s mysterious reference in 2017 to “the calm before the storm”.

Here’s an example of a “breadcrumb” from “Q” as shared by the Daily Beast:

“No Name” in the example above refers to John McCain, while “SC” stands for the Supreme Court. What does it all mean? That’s the kind of question QAnon followers concern themselves with.

In the QAnon discussions, the usual suspects of conspiracy theories loom large as well—you will hear about the Illuminati, the Rothschilds, the Freemasons, and the Jewish people.

Interestingly, press reports are called “Operation Mockingbird,” referring to a CIA operation in the 1950s to infiltrate the American media for propaganda purposes.

Of many bizarre influences (which range from apocalyptic to fascist) the work of the film director Francis Ford Coppola also crops up. Followers also cling to the number 17 as an important signal, as "Q" is the 17th letter of the alphabet. Conspiracists look for signs of it, believing it to be a way Trump can communicate with them in public.

..This is a terrible situation and Attorney General Jeff Sessions should stop this Rigged Witch Hunt right now, before it continues to stain our country any further. Bob Mueller is totally conflicted, and his 17 Angry Democrats that are doing his dirty work are a disgrace to USA!

Where is this headed?

The purpose of it all? QAnon followers are to understand information periodically released by “Q” in order to bring forth a Christian revival. This will come during a “Great Awakening” that will precede the storm predicted by Trump during which all the evil people will be defeated and sent to Guantanamo Bay.

QAnon followers also have a telling slogan, “Where we go one, we go all,” which they abbreviate to “WWG1WGA.”

Is QAnon just the latest incarnation of the #Pizzagate conspiracy theory that led a gunman to open fire at a restaurant in Washington, D.C. in 2017? At this point, it could really be anyone who is behind this persona: a troll, Russia, a member of the Trump administration or just some bored Hollywood screenwriter. The disturbing reality is that what are clearly flights of fancy end up believed by a portion of the population.

What’s more, fantasy can become real for some people as a growing spate of incidents shows, including an attempt to intimidate Michael Avenatti, the lawyer for the adult film actress Stormy Daniels, who is embroiled in a scandal with President Trump. Pictures of Avenatti’s building were posted on QAnon boards, showing a man standing there as if indicating 'we know where you are and can get to you'. The QAnon community’s disregard for the agreed-upon-facts in favor of a stubbornly pro-Trump narrative also has some features in common with cults. As the cult expert Janja Lalich writes, the main feature of a cult is when its members display “excessively zealous and unquestioning commitment to its leader, and (whether he is alive or dead) regards his belief system, ideology, and practices as the Truth, as law.” You start to get a cult when truth and important details get swept up in favor of an overarching personality-driven story.

Of course, for QAnon to become a proper cult it would need a leader and it is currently very unclear who is really behind this Internet happening.

Is QAnon just an online conspiracy of a fringe element, a master-trolling effort, or a memetic virus that is spreading with cult-like features and affecting more and more people on the right? That’s the trillion dollar question in a world where the line between patently false conspiracy theories and what is really taking place is becoming blurred for a growing number of people.

You can see some video from the Tampa rally in this clip from CNN: