Your Lifetime by the Numbers

A fascinating international study takes a look at what the average person does in a lifetime, broken down by days and percentages. 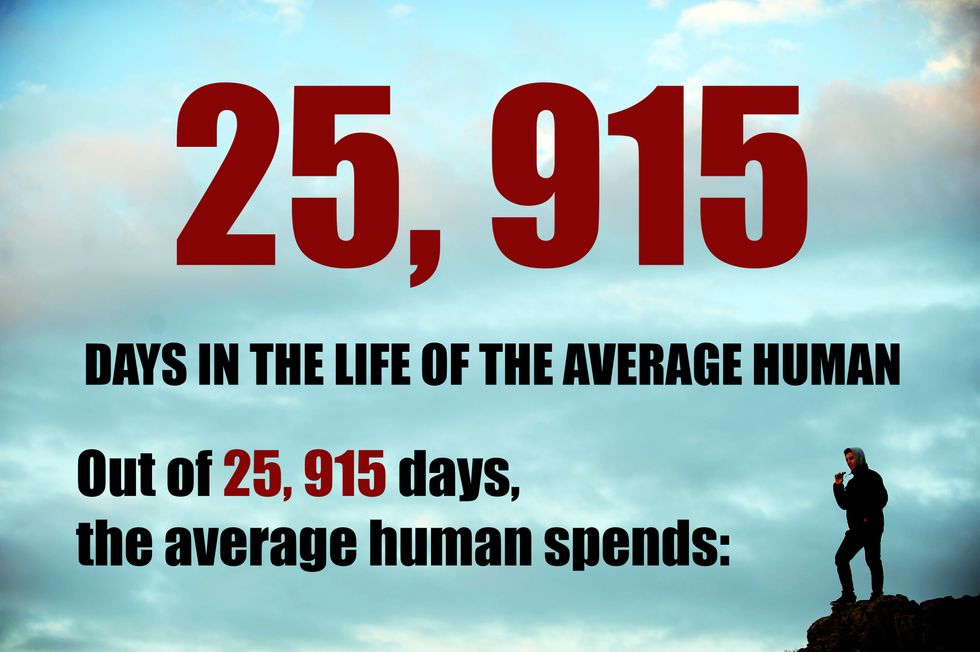 As you go through life, some days seem longer, some shorter, but altogether it's often hard to get a sense of what actually constitutes your life while you're living it. There are too many demands on your time, too many variables. Life just flows and flows, in a succession of days that seems endless until it isn't.

To gain an overarching perspective, a new study takes a look at the life of an average person in terms of pure numbers. Researchers surveyed over 9,000 people in 9 countries, including the United States, United Kingdom, Canada, Germany, France, Mexico, Russia, Korea and Spain. What they found out were some striking stats.

Taking the average life expectancy to be 25, 915 days (71 years), an average human would spend:

0.45% (or 117 days) having sex - given it's prominence in our everyday thinking and pursuits, that doesn't seem like such a great success rate.

Another sobering number is how much time we spend staring at some screen, be it a smartphone, tablet, laptop or TV.  That's 41%! Again, Germans appear to do this the least, around 8,995 days, probably spending the extra time with the loved ones.

More interesting tidbits from the study:

Mexicans are most proud of their bodies (38.6%), average the longest before breaking a New Year's Resolution (3.6 months) and laugh on average 24 times per day (more than anyone). Perhaps, all these facts are related.

Americans challenge themselves to do something physically tough the most (9.84 times per month) and spend the most money on fitness at $16.05 per week. They are also the most adventurous, trying some new thing about 7 times per month.

Here's a nice graphic putting some of these numbers in further perspective:

The study was conducted by Reebok in partnership with the global survey consultancy Censuswide. Sure, Reebok had its own commerical reasons for looking into these numbers, but the end results are fascinating, regardless of your interest in their shoes.