Few things are scarier than waking up after a car accident and finding you are paralyzed. Yet, this is a reality for 12,500 Americans each year who experience a significant spinal cord injury (SCI). In 41% of these cases, the patient ends up paralyzed from the waist down, or worse. External devices have loads of risks, including infection. So far, attempts at spinal implants have also been unsuccessful.

The problem is that previous models were too hard and rigid. They are not soft or flexible enough to accompany the varied arrangements of the human body. A person moving around normally with such an implant finds that it irritates the spinal tissue, causing inflammation to the site, which eventually causes the body to reject the implant. This process occurs rapidly, over just one week. Now a team of Swiss researchers have developed a flexible, elastic implant which may spell the end of paralysis altogether.

Researchers at the Ecole Polytechnique Fédérale de Lausanne (EPFL) have invested years developing this device, which looks like an artifact from the planet Krypton. It has a long, clear, ribbon-like structure made of soft silicon, with platinum microbead electrodes at both ends, and gold wiring running throughout. The device is meant to mimic soft tissue, and can stretch and bend in any direction, giving natural movement without friction. It can also deliver electrical and chemical stimulation to the proper nerves in order to stimulate movement. 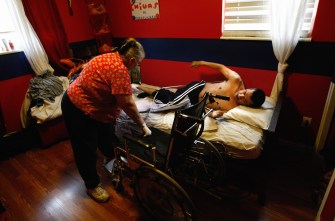 Someday paralysis like this may be a thing of the past.

A 2012 experiment made this breakthrough possible. There, scientists used electrodes to stimulate the epidural space—the outermost layer of the spinal column, in rats who had their spinal cords severed. The legs of the subjects started moving when stimulated. This was of course involuntary. But it showed that such an implant could be fashioned which the body would tolerate.

Researchers named this latest incarnation e-Dura after the dura mater, a protective layer of tissue that covers the brain and spinal cord. The implant mimics this tissue and rests upon it, providing electrical impulses in order to allow movement to occur. Additionally, it can deliver drugs to damaged nerve cells in order to stimulate them and help them to heal. Professor Stéphanie Lacour was the co-author on this study. She said due to its novel design, the implant could rest against the spine or within the cortex of the brain long-term. 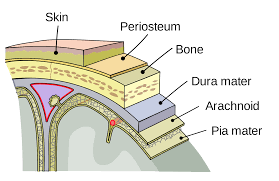 Dura mater in the skull.

Experts say this is the most advanced implant yet, which may change the face of paralysis care, or even make the condition a thing of the past. Researchers attached this new implant and found that the motor cortexes in the rat’s brains could indeed read signals from the legs through it. Next, they pitted e-Dura against surgery and a more rigid implants.

Just two months after e-Dura implantation, the rats were able to walk, jump, and run without any damage or rejection. However, they did need the help of an external stimulator connected by wires to make the device work. Currently, there is no actual link between the brain and the stimulator with e-Dura. Lacour and colleagues are now busy designing a wireless version that can cause movement through the person’s thoughts.

Practically speaking, it’s a long time before neuroprostheses are available at a medical center near you. Still, the foundation is there. In fact, this breakthrough could usher in an entirely new era of neuronal treatment, with applications for Parkinson’s disease, chronic pain, and epilepsy, among others. One of the most challenging parts now is having the implant work independent of an external control unit. But the ability of this implant avoid rejection by the body and to move with the patient are significant milestones on the road to undoing paralysis forever. Clinical trials in humans are slated to take place within the next few years.

The crabs’ blue blood contains an ancient immune defense mechanism that has helped save countless human lives.
Up Next
Technology & Innovation

Waverly Labs has developed a universal language translator that sits in your ear. It’s called the Pilot.