China has allegedly developed a 'laser gun' that can burn you to death. It probably doesn't exist. 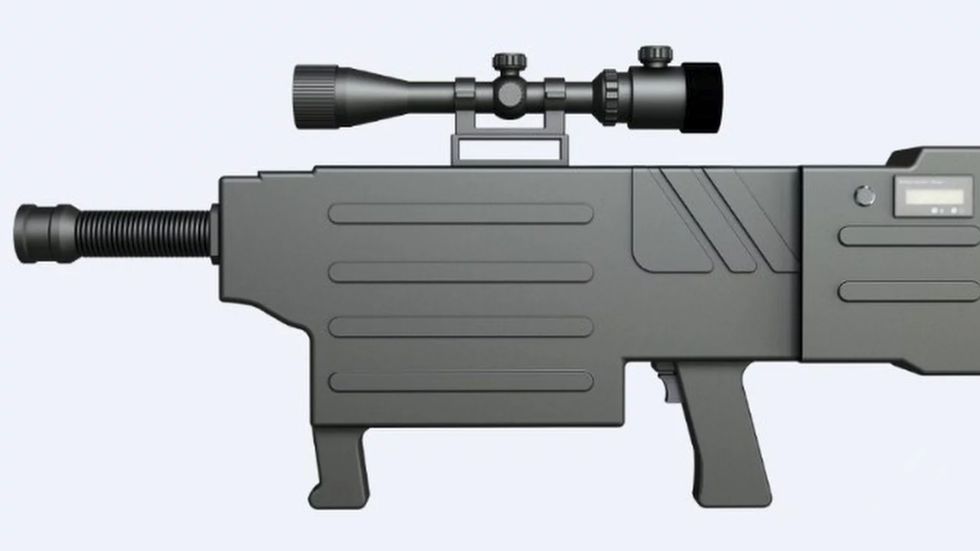 Forgive me for beginning this with a personal anecdote but (grabs chair, spins it around, sits on it backwards like a "cool pastor") I remember when I was a kid pretending that I had a laser gun. I ran around the backyard yelling PEW PEW PEW and pointing a stick at squirrels. I'm not alone in this fascination with lasers: they have long been in the public realm of consciousness as a futuristic weapon. But, much like flying cars, they have yet to come to pass.

According to the South China Morning Post, the Chinese army has developed the ZKZM-500, a laser so powerful that it (allegedly) can "instantly carbonize" your skin from a kilometer away. It is (they say) capable of a thousand two-second shots in one charge of its lithium-ion battery (not dissimilar, although one can imagine bigger, to the battery that charges your iPhone). Sound scary? It should. And there's a reason for that: the weapon most likely doesn't exist. The physics are practically impossible. Realistically, the battery alone would have to weigh several hundred pounds to provide the energy needed to fire a hot laser beam a kilometer. Not only that, the beam itself would have a hard time once it left the gun. As the beam passes through the air—and more importantly, the water molecules in the air—the 'heat' of the beam would disseminate, rendering it little more than uncomfortably warm if fired anywhere further than the width of an average living room. A far cry from the "instant carbonization" threat that is, curiously, all over Twitter. As TechCrunch puts it:

There’s just no way that a laser powered by a lithium-ion battery that a person could carry would be capable of producing the kind of heat described at point blank range, let alone at 800 meters.

That’s because of attenuation. Lasers, unlike bullets, scatter as they progress, making them weaker and weaker. Attenuation is non-trivial at anything beyond, say, a few dozen meters. By the time you get out to 800, the air and water the beam has traveled through enough to reduce it a fraction of its original power.

Of course there are lasers that can fire from Earth to space and vice versa—but they’re not trying to fry protestors; all that matters is that a few photons arrive at the destination and are intelligible as a signal.

The most the laser could do is harm your eyes, as your eyes can fail from an overload of light, which a handheld laser could provide. But, again, this is a very, very long stretch from hilarious lines like this, from Business Insider Australia (of all places):

Because the laser has been tuned to an invisible frequency, and it produces absolutely no sound, “nobody will know where the attack came from. It will look like an accident,” another researcher said. The scientists requested not to be named due to the sensitivity of the project.

And then there's this doozy, from the same article:

For instance... law enforcement could counter “illegal protests” by setting fire to banners from a long distance.

It also says protest leaders could be targeted by setting fire to their clothing or hair which, the document says, would mean they lose “the rhythms of their speech and powers of persuasion”.

But one Beijing police officer said he would prefer to stick to more traditional crowd-control methods such as tear gas, rubber bullets or electrical stun guns, such as tasers.

“The laser burn will leave a permanent scar,” he said. He said it would be a “horrid sight” that risked causing panic or transforming a peaceful protest into a riot.

The verdict? It's probably a press release designed to instill fear in opponents of the Chinese government (right down to the mention of 'illegal protests'). The very idea of an invisible laser that can set you on fire is much more effective than the actual implementation of the weapon itself, because the only thing scarier than this gun is the idea of getting shot by it. In the wise words of my old English professor: "If you heard a rumor that your landlord had a shotgun, you'd sure as shit pay your rent on time."

As Xi Jinping clings on to power by any means necessary, it should surprise nobody that dubiously worded claims about futuristic weapons are being bandied about like drunken boasts at a frat-party. Consider the timing of this news, just a week or two after President Trump began rambling publically about his proposed 'Space Force'.

Besides, the prototype looks almost exactly like the laser gun from Akira: