As I write this, my pet cat Balthazar is in an oxygen tank in the emergency room after having fluid in the lungs. While we’re waiting for the battery of tests to return, congenital heart disease is a likely culprit—the ultrasound revealed an enlarged valve. We’ll likely have to re-home him. Animals with pre-existing conditions need the right environment if they’re going to survive.

Humans are no different. While genetic testing is changing our understanding of medicine, environment matters. Create proper exterior conditions and you could thrive no matter the genes. Yet the wrong environment can exacerbate sleeping cells and transform them into giants.

Why exactly so many people are suffering from depression must be considered on a case-by-case basis, though the conditions for this disorder to thrive are certainly apparent. As of 2015, 4.4 percent of the world’s population was dealing with some form of depression. In America, 6.7 percent of the adult population suffer from a major depressive disorder every single year.

As researchers at the Max Planck Institute for Human Cognitive and Brain Disorders write,

In the search for the underlying causes of this widespread disorder, researchers have concluded that it could arise from predisposition combined with an individual’s environmental stress factors.

In humans, researchers at the Max Planck Institute have discovered a brain region that grows in size when suffering from a major depressive disorder: the hypothalamus.

Whenever any of us face a stressful situation, our HPA (hypothalamic-pituitary-adrenal) axis is triggered. This is what floods our bloodstream with cortisol in preparation of fighting, flying, or freezing. As soon as the situation is resolved, this system is overrode by other systems that bring our biology back into balance.

Those predisposed to depression, however, don’t come back down. Even the inkling of stress sets them off, as the researchers note, “full throttle.” This can even occur when there is no actual stressful situation. In such people, the researchers discovered, their left hypothalamus was, on average, 5 percent larger than those without such a predisposition. 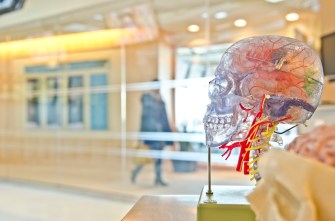 In fact, those with more severe forms of depression exhibited even larger hypothalamuses. And while medication might treat the symptoms, it made no difference on the size of the brain region that matters most.

The hypothalamus is part of our brain’s limbic system, which plays a major role in emotion, behavior, motivation, and memory. Evolutionarily speaking it is often referred to as our “reptile brain,” the idea being that it links us down the ladder to the fight-flight-freeze mechanisms inherent in all mammalian (and earlier) life. Specifically, the hypothalamus controls our body temperature, hunger and thirst, and circadian rhythms. It is also the conductor linking our nervous system to our endocrine system, the loop that floods our body with cortisol when stressed.

Unfortunately, the researchers do not know what this physical correlation means or how to treat it. But the discovery of an enlarged region is a start. By pinpointing therapies to reduce its size, which in normal humans is about the size of a penny, there could be a reduction of severity in relationship to depression.

Psychologists are finding that moral code violations can leave an enduring mark — and may require new types of therapy.
Up Next
Health

The DEA is finally changing how it regulates marijuana products

With the approval of a childhood epilepsy medication the federal government can no longer claim marijuana has no medical benefit.