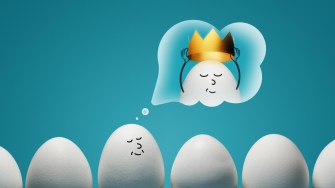 How do we really recognize narcissism?Image by SvetaZi on Shutterstock

Narcissistic personality disorder is one of several types of personality disorders and is characterized as a mental condition in which people have an inflated sense of self. They have a deep need for excessive attention and admiration, which often leads to troubled relationships. There is an inherent lack of empathy for others and narcissism, despite its outward appearance, is often masking extremely fragile self-esteem constructs.

Narcissism itself is defined as an excessive interest in or admiration of oneself. It’s entirely possible to be narcissistic without having the personality disorder…but what is the difference?

With narcissistic personality disorder, the traits and symptoms will be so intense that the person’s life, relationships, and jobs may be compromised. A personality disorder is typically diagnosed with the issues extend to negatively impact your daily life.

As Psychology Today author Preston Ni points out, there is a difference between someone with narcissistic personality disorder and someone who is exhibiting narcissistic behaviors – with the biggest difference lying in the intent.

A pathological narcissist will often purposefully induce toxic environments and harmful relationships for the purpose of exploiting other people to serve their own agendas. Someone who is considered to have the personality disorder may be caught in frequent lies or exaggerations that make them look good and others look bad, they may manipulate situations for their own gratification, they may also spread negative emotions in order to make themselves feel better.

While you may think narcissism is common, narcissistic personality disorder only affects an estimated 1 percent of the population.

Narcissism is properly viewed on a spectrum, as with most other mental health conditions. To be diagnosed with narcissistic personality disorder, a person is evaluated with the Narcissistic Personality Inventory (NPI-40). The test consists of 40 pairs of statements to which the person will need to select whichever answer best suits their personality.

Using something called a Single-Item Narcissism Scale, people who answered affirmatively to the question “are you a narcissist?” were far more likely than others to score highly on the NPI-40.

While you may think someone in your life (perhaps maybe even someone close to you) is a narcissist, it is actually quite difficult for people with narcissistic personality disorder to truly fall in love, because there is an inherent deficit of empathy makes it difficult for them to establish long-term, healthy relationships.

Psychology Today explains: “For most narcissists, relationships are transactional. They provide positive attention and sexual satisfaction to bolster their ego and self-esteem. The objective [of the relationship] is to enjoy uncommitted pleasure and most individuals struggling with this disorder will begin to lose interest in the relationship as the expectation for commitment and intimacy grows.”

Changing our view on what narcissism really is.

According to Dr. Ramani Durvasula, a clinical psychologist in Santa Monica, California, narcissism is not just posting selfies on social media or checking your reflection in every surface. While those things can be viewed as narcissistic tendencies, they do not mean the person is a narcissist.

According to Durvasula, narcissism is woefully misunderstood, which is maybe why we have such a hard time spotting it in people around us. She considers it a “buzz word” of our time, explaining that it’s viewed as a disorder of some kind of inflated self-esteem and grandiosity, and while it is those things, it’s most importantly a disorder of self-esteem.

“I often say there are four pillars to narcissism: lack of empathy, grandiosity, a chronic sense of entitlement, and a chronic need to seek out admiration and validation. Those really create the core of the disorder.”

Tags
brainemotionsempathymental healthmindpersonal growthpersonalitypsychologyrelationshipsself
In this article
brainemotionsempathymental healthmindpersonal growthpersonalitypsychologyrelationshipsself
Related
Neuropsych
Why is a Starbucks loyalty rewards program making customers so angry?
The rewards price to get a free cup of hot coffee at Starbucks is going up.
Thinking
What if you could rewire your brain to conquer suffering? Buddhism says you can
For Buddhists, the “Four Noble Truths” offer a path to lasting happiness.
3 game theory tactics, explained
How to maximize wins and minimize losses, explained by four experts on game theory.
▸
7 min
—
with
Kevin Zollman
Sponsored
What childhood “money story” is shaping your financial behaviors?
Here are the signs that you inherited “money anxiety” from your parents.
How to fix your money trauma
Do you remember feeling “money shame” for the first time?
▸
7 min
—
with
Dr. Brad Klontz
Up Next
Health
Antidepressants linked to increased suicide and self-harm in teens
A new study pushes back on psychiatry industry talking points.