Humans like to know what a sentence means. Sometimes we’ll go to great lengths to derive meaning from a group of words. More often than not, however, we’ll take the easiest possible route to understanding; the less neurologically taxing, the better. This opens the door to misunderstanding, yet it’s also how our brains are built. Spending time on sentences is the work of academics and poets, not commoners.

Still, we all (hopefully) want to know what the other person is trying to convey. The koan is antithetical to such communication. The Japanese word derives from the Chinese, gong’an, a compound that denotes “public; official; governmental; collective; fair,” and “table; desk; (law) case; proposal.” Not exactly what you’d expect to find at the heart of Zen Buddhism.

Remember that politics and philosophy were not separate endeavors during the development of Buddhism. Siddhartha Gotama, the most famous of the Buddhas (and who we refer to when we say “Buddha”), was a prince. He spent his entire career interacting with regional governments in India. While the philosophical system that bears his name is more famous in Northern Asia than in his homeland, there too little separation between what we now label “spirituality” and political realities existed.

As in good politics and good philosophy, the koan was designed to inject “great doubt” into the adept’s mind. Koans are sometimes labelled “nonsensical,” though that misses the point. Logic is not the goal here. As renowned Sanbo Kyodan teacher, Philip Kapleau, writes, “the role of the koan is not to lead us to satori [enlightenment], but on the contrary to make us lose our way and drive us to despair.”

Consider how you’d react if I ask you which color you like better, purple or orange. Then think about what you’d think if I ask which color you like better, purple or seven. You’d likely scoff and reply that seven is not a color. Yet there might be a moment where you had to pause and consider context. That moment of doubt, where you’d need to stop to think things through, is the driving factor behind the koan.

As in physical practices like Qi Gong and Ashtanga Yoga, in which students are not assigned another pose until they have mastered the previous one, it might take the student days, weeks, or even years to “get” a koan. These are certainly not easily digestible Instagram quotes. Koans force the adept to sit for hours or months until an understanding is reached. As Kapleau continues, a koan is “unsurpassed for breaking asunder the mind of ignorance and opening the eye of truth.”

For example, he mentions the most famous koan in Chinese Zen (Chan). A monk during the T’ang era asked if dogs have Buddha-nature, to which the master, Chao-chou, replied, “Mu!” While a simple translation means, “not; nothing,” you might assume the master was screaming, “no!” Yet this “first koan” is not so simple. In Chan, this koan is described as “the gate to enlightenment.”

British-American philosopher Alan Watts discovered a kindred spirit between Zen writings, haiku, and koans with beat poetry. Watts writes that it’s not about impressing the listener or conveying a grand meaning, but rather “to evoke something in the listener.” Self-discovery is the goal, he continues, which you do not reach by seeking. Rather, he writes,

It is not achieved by looking out of the corner of your eye to see if everybody else is getting the same results as you or by trying to find out what others have already discovered. It is achieved by going down into one’s own inner, secret place and asking there for a direct encounter with the world, independent of convention.

A koan is neither meaningless nor a puzzle. Replying with an answer is not the goal. It is up to the teacher to decide when the student has properly understood the koan. The revelation might come in the form of a smile or a look in their eye, or simply by observing their posture as they wrestle and eventually surrender to the sentence.

Though koan training varies dependent upon school, the basic gist is similar: it’s a mediation technique that touches the root of contemplative practice.

Below are ten koans, beginning with more popular ones. Reading them on the screen is purely for curiosity’s sake. Without being assigned one by a teacher, they’re just words you glance over. Familiarity with Zen might afford them a particular resonance. And, of course, “sitting with them” is the real utility, though thinking you’ve “got” them defeats the purpose. (Q is question; R is reply.) 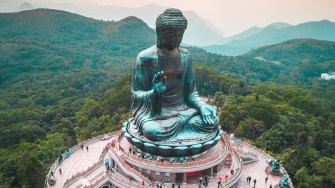 Two hands clap and there is a sound. What is the sound of one hand?

If you meet the Buddha, kill him.

Without thinking of good or evil, show me your original face before your mother and father were born.

Q: Not even a thought has arisen; is there still a sin or not? R: Mount Sumeru!

Q: What is Buddha? R: Three pounds of flax.

Q: What is the meaning of the ancestral teacher’s coming from the west? R: The cypress tree in front of the hall.

Wakun complained when he saw a picture of the bearded Bodhidharma: Why hasn’t that fellow a beard?

Q: Without speaking, without silence, how can you express the truth? R: I always remember springtime in southern China. The birds sing among innumerable kinds of fragrant flowers.

Q: Is there a teaching no master ever preached before? R: Yes, there is. Q: What is it? R: It is not mind, it is not Buddha, is it not things.

There are many things in life that cannot be improved with greater effort. Sometimes, life requires that you step back.
The Past

Speculation about the existence of aliens goes all the way back at least to the Greek philosophers. Their arguments will sound familiar.
Thinking

Safety through technology is no bad thing—Nietzsche himself sought doctors and medicines throughout his life—but it can become pathological.
Up Next
Starts With A Bang

Hubble’s advanced camera for surveys identified a number of ultra-distant galaxy clusters, allowing us to probe whether dark energy is a cosmological constant or not. These ultra-distant clusters display star-formation […]