Sustainability and prevention are counterintuitive to human biology, which likely explains why we tweet out screeds against climate change from smartphones that are, themselves, contributing to climate change. Is it hypocrisy if we’re ignorant to all of the mechanisms behind our folly? When contemplating the bigger picture, absolutely, yet every animal leaves a planetary imprint. Some are just larger than others.

We think in years, not generations, centuries, or epochs. More to the point, we think in seconds. The fact that those seconds add up to hours (and so on) often eludes us in the moment. We’re not designed to consider eras even if our imaginations entertain them.

Thus, we design our lives due to a combination of genes and environment; once we become accustomed to a particular way we consider it “right” largely because it’s what is known to us. That doesn’t mean we’re privy every foundation or potential consequence of our decisions, however. The closer we are to an object the harder it is to see.

This is as true of internal conditions as external realities. For example, a number of circumstances have led to the current obesity epidemic, a truly flustering and illogical disease for an animal that, for the better part of a quarter-million years, was stealth and strong, aware and healthy, intimately connected to the environment at every turn.

“Grain Brain”: How your food choices can determine your brain’s destiny

We had to remain cognizant of our surroundings. Being comparatively slow and weak to other mammals, homo sapiens were middle predators: we hunted and were hunted. Our ascent to the apex is a relatively new phenomenon. By the looks of it, we’re squandering our throne in every respect.

Evolution granted us bipedalism, which gave us cardiovascular stamina unknown in the animal world; opposable thumbs, to craft elegant tools; and an imagination that allows us to put those tools to use. Foresight is our special skill: we can see decades down the road and implement changes necessary for reaching our goals.

Which makes one wonder why we’re such terrible eaters. We literally consume junk that no other animal would touch. The same chemistry that enabled us to battle seemingly insurmountable diseases led to the creation of foodstuffs, products sold for consumption that have no actual food in them. Or high-carbohydrate, high-sugar “food” that’s destroying our microbiome, which, as we’re continually finding out, plays a much bigger role in our emotional and mental health than previously conceived.

Neurologist David Perlmutter likely didn’t know the effect that his book, Grain Brain, would have on a nation. His anti-gluten crusade has been both championed and decried. Yet in the five years since its release, a credible amount of science has been on Perlmutter’s side. He recently sat down with CBS to discuss Grain Brain‘s expanded edition to make the claim that high carbohydrates leads to brain inflammation, potentially resulting in anxiety, depression, and PTSD.

The segment strangely opened with a quote from the sugar lobby — not exactly who you’d turn to for unbiased commentary. While Perlmutter addressed this strange incident on his blog, he recently reiterated his sentiments about excess carbohydrates, claiming it’s a “diet that’s sending really bad signals to our genome, which then expresses genes that enhance inflammation, that degrade our antioxidant quenching ability, that compromise our ability to detoxify.” 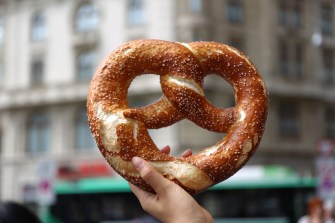 Perlmutter reminds us that we need carbohydrates, especially fiber. Knowing what carbs to eat is different than avoiding them altogether. As Perlmutter recently wrote in Men’s Health, beyond gluten, it’s the sugar and high glycemic foods that need to be avoided:

In a 2018 report in The Lancet that involved 18 countries on five continents, risk of death during the study in those with the highest carb consumption was increased by 28 percent, while it was decreased by 23 percent in those who ate the most fat. And as it relates to the brain specifically, a stunning report in the journal Diabetalogia shows a dramatic correlation of A1c, a marker of average blood sugar, with dementia.

Perlmutter’s great strength is in recognizing the interdependence of life, the causal impacts we often don’t consider. Emotions are sometimes treated as ephemeral states, not the product of biochemistry. That’s a problem: everything we eat has an emotional effect, because all foods affect our internal chemistry. It’s not a stretch to realize that depression and anxiety, states in which our chemistry and equilibrium are thrown off balance or depleted, is influenced by the foods we eat.

Ketogenic diets have been shown to reduce brain inflammation, which Perlmutter argues is a “cornerstone mechanism related to progressive destruction that occurs in the brain as we age, as well as Alzheimer’s disease.” Aging itself increases inflammatory chemicals; add aggravating foods to this process and obviously we’ll suffer the consequences. We pay with our minds the cost of our waistlines.

Prevention and sustainability need to remain the focus with so many food (and foodstuff) options and so much dietary misinformation circulating. During our evolutionary ascent we’ve created too many bad choices, then got stuck believing they were just the way life is. The CDC estimates that up to 40 percent of annual deaths are preventable through lifestyle changes, including diet. Eating better is not a hard price to pay. We just need to make healthier decisions about what goes inside of our mouths.

Tags
alzheimer'sbraincognitive sciencedepressionhealthpsychology
In this article
alzheimer'sbraincognitive sciencedepressionhealthpsychology
Related
Neuropsych
Psychology studies that go viral are likelier to be bogus
A new 20-year analysis of over 14,000 psychology studies finds that a study’s media coverage is negatively linked to its replicability.
The Learning Curve
Why do high IQ people stagnate in their careers? Emotional intelligence
Research suggests that emotional intelligence is more vital for success than IQ.
How to live after your soulmate has died
Astronomer Michelle Thaller explains the healing power of physics after losing her husband.
▸
7 min
—
with
Michelle Thaller
The Future
Space travel will radically change human psychology and spirituality
We are traveling in a realm that once exclusively belonged to the gods. Space travel will force humanity to rethink everything.
Neuropsych
Memory and the benefits of forgetting
Forgetfulness isn’t always a “glitch” in our memories; it can be a tool to help us make sense of the present and plan for the future.
Up Next
Health
Wired that way: genes do shape behaviors but it’s complicated
The relationship between our genotypes and our psychological traits, while substantial, is highly indirect and emergent.