Michael Pollan was onto something when he added two words to conventional wisdom, writing, “You are what what you eat eats.” The nutrients your meal consumes becomes part of you as well, whether it’s a cow munching on grass or the soil your vegetables grow in. We know eating has an emotional effect, but you cannot separate emotions from psychology as they are the basis of your mental states.

We can extrapolate philosophically, but we can also look at actual studies on the nutrient profile of foods and their relationship to mental states—specifically, in this case, depressive disorders. A recent study, published in World Journal of Psychiatry, investigated 34 nutrients, extracting data as it relates to foods high in at least one of 12 antidepressant nutrients:

How To Conquer Depression Through Diet | Dr. Drew Ramsey

While many nutrient profiling scales currently exist, created by government agencies, researchers, and the food industry, none focus on mental disorders or brain health. Additionally, no scale is based on nutrients that are supported by scientific literature to be involved in the prevention of and recovery from psychiatric disorders.

There is evidence that the lack of key nutrients, including omega-3 fatty acids, B-vitamins, zinc, magnesium, and vitamin D, result in depressive symptoms. In fact, clinical treatment often involves supplementing one or more of these nutrients. The fact that we can get plenty of vitamin D with just a few minutes in the sun is one indicator that our lifestyle patterns are missing essential components for optimal health.

Given the global rise of depression, changes in diet provide at least one level of prevention and therapy—it is unlikely that diet alone could cause such a spike in rates, though it certainly can play an important contributing factor. Something as simple as altering your food intake could help battle the consequences of these symptoms: low self-esteem, loss of meaning, anxiety, spoiled relationships, and at the extreme, suicide, whose rates have also been increasing.

The foods, along with their Antidepressant Food Score (AFS), are listed below: 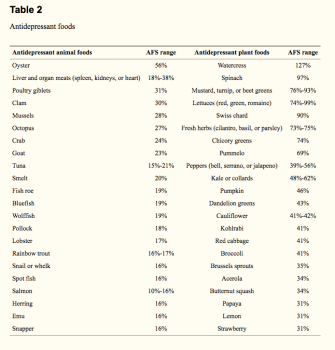 According to the mean score by category, vegetables top the list at 48 percent, followed by organ meats (25 percent), fruits (20 percent), and seafood (16 percent). The list concludes with legumes, meats, grains, nuts and seeds, and dairy, all coming in below 10 percent. Unlike traditional guidelines, this list does not focus on what not to eat:

A recent review suggests that nutrient profiling scales designed to improve consumer food choices should be based on nutrients known to be beneficial for health as opposed to nutrients to avoid.

They note that recent “common wisdom” suggesting that saturated fats, cholesterol, and sodium is bad for health is now in question. Whereas it’s rather obvious that carb- and sugar-heavy diets do not work in our favor, the aim of this study is to remind us what we should be putting into our mouths. Without actionable input, telling us to leave certain foods behind without offering replacements makes little sense.

The main problem is that the majority of Americans do not eat foods high in AFS. For example, most of the adult population consumes too few vegetables; one study reveals that only 27.2 percent eat three or more servings per day. Between 80-90 percent do not eat at least two servings of seafood per week. And forget about most Americans eating organ meats.

Which is a shame, given that organ meats are the most nutrient-dense part of an animal. Whereas there is evidence our ancestors ate the organs and left the meat for scavengers, we’ve reversed that trend—and are paying the cost.

Can you beat depression with food? with Dr. Drew Ramsey

There is no single food source that will end depression. Rather, the authors write, it seems to be a confluence of events that have led to our abandoning essential nutrients, including increased inflammation due to the “standard” American diet and a lack of dietary fiber. With an increased understanding of the microbiome in overall health, we’re gaining clarity over just how influential nutrients are for every aspect of our health.

As nutritionist Chris Kresser wrote in 2011, purely vegetarian and vegan diets are problematic given the lack of essential nutrients, such as those cited in the above study. When asked by Joe Rogan what he thought the healthiest diet is, Kresser replied a vegan diet with shellfish; he’s also championed organ meats. Of course, a vegan diet could by default not include animal products, but Kresser’s suggestion squares well with this recent research.

There is no question that these food sources provide the most nutrient-dense meals possible. Cultural aversions to organ meats is more the result of economics, not nutrition; at some point, eating organs was believed to be “lower class.” That, along with technological advancements such as frozen food that is usually championed as progressive, has set into motion the disastrous eating habits we have today, along with the depression that has followed. The link is clear. Forging new links requires another story.

Symbolic gestures often speak to our psyche in ways no rational action could ever speak to our intellect.
The Past

The weird and wild ways mummy fever swept through Europe.
The Future

Back to the drawing board.
Up Next
Starts With A Bang

This Is How Astronomers Solved The ‘Zone Of Avoidance’ Mystery

Even from our location, there’s a great lesson to be learned: the galactic plane obscures the Universe beyond it, about 10 degrees above and below it, in visible light, as […]