The field of moral psychology is the study of how people think through moral decisions. It goes back all the way to Plato and Aristotle, but today, we have modern psychological techniques to utilize. A data set 2,500 years in the making, i.e. recorded human civilization, gives us reason to think that most people make moral decisions in similar ways, based on prebuilt moral dispositions. The concept means that, even across cultures, we would see basic similarities in moral systems.But, if our brains come with a built in ethical system, why is there such a debate over right and wrong?Doctors Haidt and Graham, have studied this subject extensively. In their work they argue that there is great debate over the nature of right and wrong, but that the debate is over the meaning of five moral foundations rather than over what morality is — most of the time. Those five foundations are harm/care (preventing it, to be precise), fairness/reciprocity, loyalty, authority, and purity. Each is briefly explained here:

1) Harm/care: This foundation is based on our neurological tendencies to attachment, compassion, and our feelings towards those who cause harm.

2) Fairness/reciprocity: This foundation is all aboutour innate understanding of when we are not being treated fairly, something many animals have as well. This foundation is used as a basis for a wide range of ideas, including justice, freedom, and autonomy.

3) Loyalty:This foundation relates to our ability to form large, organized, cooperative groups of people who are not related. It is the driving force behind ideas such as shared sacrifice, patriotism, and the manifestation of tribal thinking.

4) Authority:This foundation was shaped by the history of hierarchical social interactions. It includes deference to authority viewed as legitimate and respect for traditions for their own sake.

5) Purity: This foundation is based on the psychology of disgust, a vital element in psychological evolution. It relates to any notion of finding virtue by controlling what you do and don’t do with your mind or body. Not only does this include conservative notions of chastity, but can also include such ideas as how pure your food must be, what bodily activities are morally good and evil, and what drug useage (if any) a person views as morally legitimate.

But, why would our brains have evolved to be predisposed to these notions of proper behaviour?These five fundamentals cover a great deal of human behaviour and a tremendous range of attitudes. A group that can work together well, by means of sharing moral dispositions, is likely to thrive. It makes some sense then, that a group which was even slightly better able to utilize these ethical tools than another group might be more cohesive, successful, and therefore spread the dispositions by both example and population growth.

But it doesn’t really seem like we all share these five values. Have you seen how ferocious morality debates can get?

We do share the foundations, so say the researchers, but we don’t share them equally. Their studies show that while most everybody places a high value on fairness and harm prevention as cornerstones of morality, not everyone agrees on the significance of the other three values.

While the first two values, harm and fairness, cover how you treat other people, the last three relate to group membership and tradition. Individuals determined to be open to new experiences tend to view the first two foundations — harm/care and fairness/reciprocity — as the most vital, while people who are more disposded to routine and familiarity placed no special value on the first three. It was also found that open individuals placed greater value on the first two precepts, but not nearly as much on the last three; while more routine people tended to view all five elements as being vital to morality.Can morality be reduced to five fundamental points? These two doctors think it can be. What does that say about us and our moral disagreements? This theory, if correct, could help us understand people we disagree with better, by showing us how they reason through moral problems. Is would only be of use, however, if we remember that there are moral foundations we might not be in tune to, but have every ability to harness. 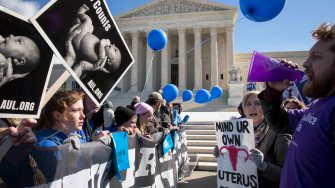 Pro-choice advocates (right) and anti-abortion advocates (left) rally outside of the Supreme Court, March 2, 2016 in Washington, DC. The Supreme Court heard oral arguments in the Whole Woman’s Health v. Hellerstedt case, where the justices considered a Texas law requiring that clinic doctors have admitting privileges at local hospitals and whether clinics must upgrade their facilities to standards similar to hospitals. (Drew Angerer/Getty Images)
—
Tags
EthicsJonathan Haidtmoral foundationsmoral psychologymoralitypsychology
In this article
EthicsJonathan Haidtmoral foundationsmoral psychologymoralitypsychology
Related
Neuropsych
Psychology studies that go viral are likelier to be bogus
A new 20-year analysis of over 14,000 psychology studies finds that a study’s media coverage is negatively linked to its replicability.
The Learning Curve
Why do high IQ people stagnate in their careers? Emotional intelligence
Research suggests that emotional intelligence is more vital for success than IQ.
How to live after your soulmate has died
Astronomer Michelle Thaller explains the healing power of physics after losing her husband.
▸
7 min
—
with
Michelle Thaller
The Future
Space travel will radically change human psychology and spirituality
We are traveling in a realm that once exclusively belonged to the gods. Space travel will force humanity to rethink everything.
The Present
What’s effective altruism? A philosopher explains
Some effective altruists “earn to give” — they make as much money as they can and then donate most of it to charities.
Up Next
Starts With A Bang
The First Climate Model Turns 50, And Predicted Global Warming Almost Perfectly
For those who still don’t believe in global warming, the science has had it right for half a century now.“Greenhouse gases are the second most important factor for climate, after the […]