Which word is funnier: porridge or oatmeal?

That was the question that inspired a new study that ranks the funniest words in the English language.

“Apparently my supervisor’s kids couldn’t stop laughing at ‘porridge’ one morning during breakfast,” Engelthaler said. “He was really confused because ‘porridge’ and ‘oatmeal’ are the same thing, but they sound different. He thought ‘porridge’ was funnier, I thought ‘oatmeal’ was funnier. So, we decided to make a study to kind of settle the argument.”

Engelthaler and his colleagues at the University of Warwick asked 821 people in the U.S. to rate 200 words, which were chosen from a list of 5,000.

The top 12 words, in order of funniest, were:

At the other extreme, these were the words respondents found least humorous:

The researchers’ main objective was to establish a data-set to be used in future humor studies. Still, the results showed some interesting trends, particularly in the differences between what men and women consider funny.

“We found that words that are really infrequent, so words people are unfamiliar with, are funnier on average,” Engelthaler said. “I think you’re less used to them, so you find them strange and funny.”

Engelthaler thinks this might be explained by the benign violations theory, which suggests that we find something funny when it deviates from our expectations, but only in a way that’s not too offensive. That might explain why curse words didn’t top the list.

“They end up being somewhere closer to the top,” Engelthaler said. “But they’re not at the very top, which is because, I guess, they offend a slight fraction of the people they’re presented to.” 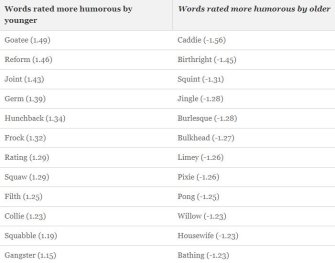 Strange words could also be funny for a different reason.

“One thing we want to look into is the sounds of the words, because there have been studies that have taken a look nonsensical words,” Engelthaler said . “They found that certain sounds in the words and sound patterns make them really funny. So even though the word has no meaning at all, they still can be funny words.”

Although the words were rated by people in the U.S., the U.K. researchers didn’t notice much of a difference between what people in the two countries consider funny.

“As long as something’s slightly naughty and slightly dirty, and not too negative, you would find funny in both the U.K. English and the U.S. English,” Engelthaler said.

English is a dynamic language, and this summer’s new additions to dictionary.com tell us a lot about how we’re living.
The Past

Linguists discover 30 sounds that may have allowed communication before words existed.
Neuropsych

When you say, “I’ll get it done this week,” you’re just lying to yourself.
Life

Digitized logbooks from the 1800s reveal a steep decline in strike rate for whalers.
Up Next
Culture & Religion

Silicon Valley needs more diversity of thought and well-rounded thinkers. An interview with Scott Hartley, author of The Fuzzy and The Techie: Why the Liberal Arts Will Rule the Digital World.