Everybody is familiar with the difficulty of doing all the things you need to do, let alone doing everything you want to do. Something goes wrong, it takes longer to do one section than originally planned, you need somebody else to get their work done before you can start, and countless other problems get in the way. In the end, the task took much longer than we’d hoped.

Somehow, this is one of the more common human experiences, as anybody who has been to a seminar on SMART goal setting can tell you.

In an accidental study, a group of grad students, postdocs, and undergraduates at MIT spent nine months recording what they wanted to do, how long they thought it would take them to do it, and how long it actually took to complete—if it got done at all.

The rather Gonzo paper on it, “‘I’ll Finish It This Week’ And Other Lies,” is a humorous discussion of the difficulty of accurate goal-setting and a savage glimpse into the purgatories of others which are often so similar to our own.

People at MIT have trouble getting work done on time? I suddenly feel better about myself. 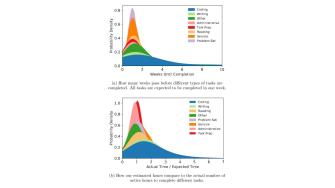 How long tasks were estimated to take (top) compared to how long they really took (bottom). If people were always right on how long things would take to do, the peaks would all be above x=1Credit: Kaley Brauer

Last year, the aforementioned researchers created a system to help support each other in their work and encourage one another to reach their goals. The system involved a weekly check-in where the participant listed the tasks they wanted to do and how long they expected them to take and report back a week later on how long those tasks actually took.

Perhaps by accident, this system took on the form of a longitudinal study, the sort of research that looks at a certain variable (in this case, task completion times) over a certain period of time.

1. Coding: any coding task for research or schoolwork (e.g., analysis in Python).

2. Writing: any writing or editing-focused task (e.g., working on a paper draft).

5. Talk Prep: writing or practicing a talk or poster presentation.

7. Problem Set: homework for a class that is not coding- or reading-focused.

The median task took 1.4 times as long to accomplish as expected, while the average difference was a slightly larger 1.7 times. Just over half, 53%, of tasks were completed on time. Writing and coding tasks took the longest, with some taking ten times as long as expected.

Note to editor: See, it’s not just me!

Tasks with deadlines were completed on time. This is shown in the problem set and service categories, as homework has a due date and volunteer events are planned. Postdocs were more accurate than anybody else, but this might be caused less by their age and experience and more by the type of work they were doing. Graduate students were worse than undergrads, suggesting that age is not a substantial factor.

It seems that even highly educated people who have to estimate the time their typical work will take on a regular basis aren’t very good at it. It seems to be a universal truth that most tasks take much longer than expected. Even those who are quite experienced at these tasks were little better at making these estimations.

So, if you’re planning on doing something within a certain period of time, it might be best to lengthen your original estimate. But beware! This might cause the actual time required to multiply yet again.

Alternatively, since tasks that come with hard deadlines tended to be completed on time at much better rates than those without, you could just add deadlines and stressful consequences for missing them to your goals. Other writers agree that this does wonders for getting writing done at only a moderate cost to your sanity.

Tags
goal-settinghumorpsychologywork
In this article
goal-settinghumorpsychologywork
Related
If money doesn’t buy happiness, you’re spending it wrong
These money experts say you can buy happiness. There are some red flags to look out for, though.
▸
7 min
—
with
Lindsay Bryan-Podvin
Thinking
“Give a f***, actually”: The surprising benefits of being grateful for things you dislike
Radical Emotional Acceptance calls on you to celebrate all of life’s emotions — even the negative ones.
Health
What happens when regular porn watchers abstain for a week?
Researchers watched for signs of withdrawal — but didn’t find any.
Thinking
Why you should laugh at yourself, according to Seneca and Nietzsche
“It is more human to laugh at life than to lament it.”
Sponsored
4 misleading personal finance tips
Personal finance advice is often over-simplified and fails to consider economic research or people’s unique circumstances.
Up Next
Career Development
Make a little time for yourself (in a 24/7 world)
We all know that work-life balance can be difficult, but do we make it harder on ourselves by how we choose to conceptualize the idea? More specifically, is the concept […]