As hard as it is sometimes to get a conversation started, imagine how difficult it must have been before words existed. Linguists have long wondered how verbal language began. Some form of communication must have been in place to get the whole thing going. Maybe it was gestures.

Now, a new study published in Scientific Reports by linguists at the University of Birmingham (UBir) in the UK and the Leibniz-Centre General Linguistics in Berlin proposes another idea: Verbal communication may have begun at least partly with “iconic” mouth-produced sounds whose meanings were inherently obvious to anyone who heard them. (The researchers use the word “iconic” to mean that these sounds represent things.)

The importance of these sounds may also extend beyond their role as the ultimate conversation starters, says co-author Marcus Perlman of UBir. “Our study fills in a crucial piece of the puzzle of language evolution, suggesting the possibility that all languages — spoken as well as signed — may have iconic origins.” 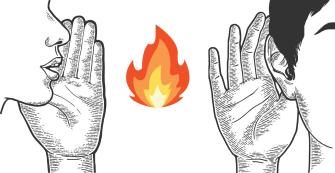 The researchers have posted a few of these iconic sounds: “cut,” “tiger,” “water,” and “good.” (Note: These audio files won’t play in Apple’s Safari browser.) The study reveals that there are a lot more of these sounds than previously appreciated, and likely enough to form a bridge to language development.

“Our findings challenge the often-cited idea that vocalizations have limited potential for iconic representation, demonstrating that in the absence of words people can use vocalizations to communicate a variety of meanings — serving effectively for cross-cultural communication when people lack a common language.”

The researchers compiled a list of 30 iconic-sound candidates that likely would have been of use to the earliest speakers. These included mouth noises that could represent:

Was “nom, nom” the sound for eating? 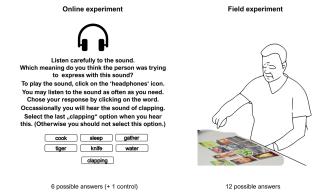 Making a list — and making noises — is one thing; finding out if anyone understands them is another. The researchers tested out their iconic sounds in two different experiments.

In an online experiment, speakers of 25 different languages were asked to match the meaning of iconic sounds to six written labels. They listened to three performances for each of the 30 candidates, 90 recordings in all.

Some meanings were more readily understood than others. “Sleep” was correctly identified by almost 99 percent, as opposed to “that,” understood by only 35 percent. The most often understood sounds were “eat,” “child,” “sleep,” “tiger,” and “water.” The least? “That,” “gather,” “sharp,” “dull,” and “knife.”

The researchers next conducted field experiments to capture the meaningfulness of the sounds in oral cultures with inconsistent literacy levels. For these people, researchers played twelve iconic sounds for animals and inanimate objects as listeners identified each from a grid of pictures. The volunteers correctly identified the sounds’ meanings about 56 percent of the time, again above the level of chance.

The universal roots of language

In addition to being the sounds that facilitated the birth of language, the authors of the study wonder if such commonly understood sounds may also be a factor in the similarities that exist between different modern languages that don’t share a common root language. They cite other research that found “vocalizations for 25 different emotions were identifiable across cultures with above-chance accuracy.”

“The ability to use iconicity to create universally understandable vocalizations,” says Perlman, “may underpin the vast semantic breadth of spoken languages, playing a role similar to representational gestures in the formation of signed languages.”

Virtually all the statistical methods researchers commonly use assume potential mating partners decide who they will have children with based on a roll of the dice.
Health

Our ancestors ate a Paleo diet. It had carbs.

There is no one prehistoric meal plan.
Health

Humans are 8% virus. Here’s why that matters.

About 8% of our genome is made of leftover viruses from our ancestors’ infections.
The Past

Marcus Tullius Cicero is widely regarded as one of the most gifted orators in human history. His writings can teach us a lot about the lost art of public speaking.
Up Next
Starts With A Bang

How Far Back In Time Can We See With Our Naked Eye?

Every observation out into deep space is also a look back in time.Whenever you observe an object, you aren’t viewing it in its present state.When one of Jupiter’s moons passes behind […]