An ongoing study at the Virginia Commonwealth University School of Social Work is doing research into the ways that pets and other forms of social support can impact the lives of young LGBTQ individuals.

This study began in 2018 and has since focused on the role that animals specifically play in the lives of LGBTQ youth between the ages of 15-21 years old. Due to the ongoing COVID-19 pandemic, many of these interviews with individuals have been conducted via video conferences. The study parameters have even expanded, allowing for questions about what it’s been like to have pets during the coronavirus lockdown.

Associate professors Shelby McDonald, Alex Wagaman, and Traci Wike work alongside a team of student researchers (including Caroline Richards and Ryan O’Ryan) to interview LGBTQ individuals on their experiences with pets and how that has impacted their lives.

Questions in these interviews include things relating to:

McDonald explains to Commonwealth Times: “We added questions about experiences with pets during the pandemic because we wanted to expand our focus to understand how pets might support gender and sexual minority youth who were forced to live at home in a family environment that might not affirm their identity.” 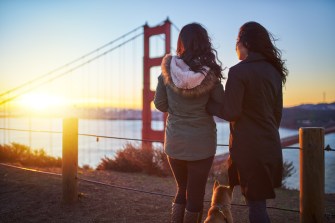 From animal-assisted therapies to having dogs visit schools to bring down stress and anxiety levels, there have been many studies that look at the benefits of pet ownership. Photo by Joshua Resnick on Shutterstock

Absolutely. Over the years, many studies have proven the benefits of human-animal interactions. From animal-assisted therapy practices to having therapy dogs in schools to reduce anxiety – there are many mental health benefits to animal-human interactions.

A similar study has been done on the impact of pets in the lives of older LGBT individuals.

A different 2018 study explored the role of pets in the lives of lesbian, gay, bisexual, and transgender adults over the age of 50.

In this study, over 59 percent of participants reported that they have pets and described them in affectionate terms, often referring to them as family. Many individuals classified their pets as “supportive” either by offering companionship or keeping them active and socializing. Many participants explained that their pets help them cope with some form of physical or mental health condition.

How is this study different?

The goal of this particular study is to focus on the younger LGBTQ population and to examine how human-animal interactions might impact a person’s experience and well-being when faced with victimization over their sexual orientation or identity. Not only that, but this study takes a look at both the positive and negative impacts of having a pet as an LGBTQ individual.

The vast majority of current research focuses on people who are not discriminated against or marginalized by society. According to the researchers, pets may lead marginalized people to “a path of financial stress and housing instability,” which are issues the LGBTQ community already struggles with.

“Pets can better people’s lives,” Richards explains to Commonwealth Times, “but it’s also been interesting to see the ways in which pets can be stressors for people experiencing homelessness and financial insecurity.”

Shelby McDonald, one of the lead associate professors on the study, has dedicated the last decade of her life to researching the role of animals in the lives of children and has recently turned that focus toward LGBTQ youth.

As of September 2, the researchers have conducted 164 initial interviews. O’Ryan, one of the student researchers, explains: “We’ve collected a pretty diverse bunch, but the participants we interviewed have been largely white, cisgender, bisexual women. I wish we had the chance to interview more people of color and more people from diverse gender identities.”

For more information on the study or a change to join as a participant, email cfar@vcu.edu.

Engaging in a brief mindfulness exercise made people who identified “I/me” words 33% less likely to volunteer.
Up Next
The Present

"Our data should be ours no matter what platforms and apps we use," Yang said.